In this era of data explosion, the cumulative amount of obsolete data is becoming extremely large. For storage cost considerations, many independent Internet service providers are developing their own cold storage system. This paper discusses one such collaboration between Tencent and Intel to optimize the ultra-cold storage project in Tencent File System* (TFS). The XOR functions in Intel® Intelligent Storage Acceleration Library (Intel® ISA-L) successfully help TFS meet the performance requirement.

Introduction to Tencent and TFS

Tencent is one of the largest Internet companies in the world, whose services include social networks, web portals, e-commerce, and multiplayer online games. Its offerings in China include the well-known instant messenger Tencent QQ*, one of the largest web portals, QQ.com, and the mobile chat service WeChat. These offerings have helped bolster Tencent's continuous expansion.

Behind these offerings, TFS serves at the core of file services necessary for many businesses. With hundreds of millions of users, TFS is facing performance and capacity challenges. Since the Tencent Data Center is mainly based on Intel® architecture, Tencent has been working with Intel to optimize the TFS’s performance.

Unlike for Online Systems, procurement of processors for TFS’s ultra-cold storage project is not a budget priority, so existing processors have been recycled from outdated systems. This approach does not result in powerful compute performance, with calculation performance easily the biggest bottleneck for the system.

Previously, in order to save disks capacity and maintain high reliability, the project adopted the erasure code 9+3 solution (see Figure 1). 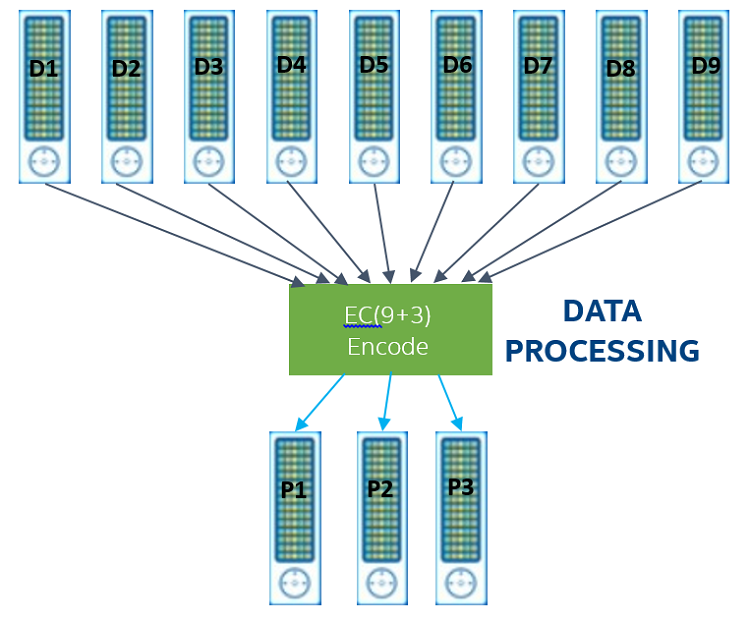 In order to reduce the redundancy rate and improve performance bottlenecks, a solution that uses XOR operation on 10 stripes to generate 2 parities was adopted (see Figure 2). The first parity is horizontal processing, and the second parity is vertical processing. 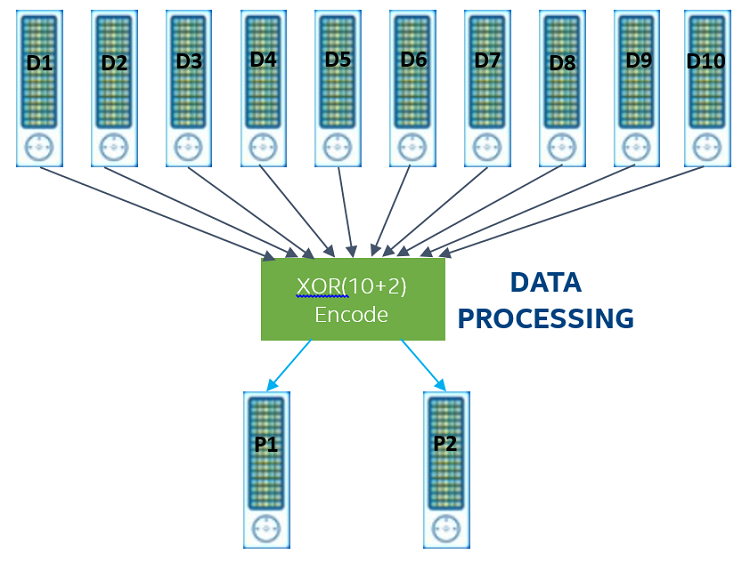 Tencent was seeking an effective and convenient way to reduce the calculation effort of the XOR operation. It needed an efficient and optimized version of XOR to alleviate the performance bottleneck and meet the design requirements for the ultra-cold storage solution.

Intel ISA-L is a collection of optimized, low-level functions used primarily in storage applications. The general library for Intel ISA-L contains an expanded set of functions used for erasure code, data protection and integrity, compression, hashing, and encryption. It is written primarily in hand-coded ASM but with bindings for the C/C++ programming languages. Intel ISA-L contains highly optimized algorithms behind an API, automatically choosing an appropriate binary implementation for the detected processor architecture, allowing ISA-L to run on past, current, and next-generation CPUs without interface changes.

Collaboration between Tencent and Intel

Tencent and Intel have worked together using Intel ISA-L to optimize ultra-cold storage project in TFS.

The XOR function used in the ultra-cold storage project was originally coded in C Language and in Galois code format, named galois_xor. The first optimization proposal was to replace galois_xor with Intel ISA-L gen_xor_avx directly. The test results from this single change showed a ~50-percent performance gain.

This distinct performance gain successfully met the requirements from Online Systems. Even better, since Intel ISA-L is open-source (BSD-licensed) code, there was no cost to the Tencent team for the huge improvement in system performance.

As a result of this successful collaboration with Intel, Sands Zhou, principal of the Tencent ultra-cold storage system, said: “TFS ultra-cold storage project, based on entire cabinet program, CPU became a performance bottleneck. In the meantime, the project got strong supports from Intel based on ISA-L XOR program. Thanks again, wish more collaborations with Intel in the following work.”