Vulkan is the new generation, open standard API for high-efficiency access to graphics and compute on modern GPUs. This API is designed from the ground up to provide applications direct control over GPU acceleration for maximized performance and predictability. Vulkan is a unified specification that minimizes driver overhead and enables multithreaded GPU command preparation for optimal graphics and compute performance on diverse mobile, desktop, console, and embedded platforms.

The Stardust sample application uses the Vulkan graphics API to efficiently render a cloud of animated particles. To highlight Vulkan’s low CPU overhead and multithreading capabilities, particles are rendered using 200,000 draw calls. The demo is not using instancing; each draw call uses different region of a vertex buffer so that each draw could be a unique piece of geometry. Furthermore, all CPU cores are used for draw call preparation to ensure that graphics commands are generated and delivered to the GPU as fast as possible. The per-core CPU load graph is displayed in the upper-right corner. 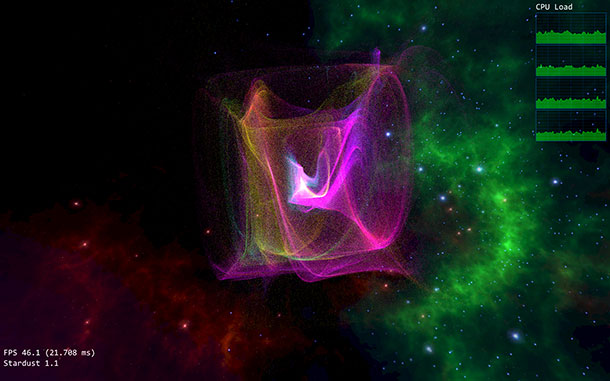 Stardust sends 2,000,000 point primitives with 200,000 10-point draw calls to the GPU each frame. Please note that this is an exaggerated, extreme scenario that is intended only to demonstrate how thin and fast the Vulkan driver is. Despite so many draw calls, the CPU load is quite low as shown on the green graphs in the image above.

GPU work generation and submission on a four-core CPU.

The position of each particle is computed entirely on the GPU in the vertex shader stage. The following steps are performed to compute particle positions:

Animation of the particle cloud is achieved by updating the “matrix seed” value periodically on the CPU.

To achieve nice color effects, the particles are rasterized with additive blending enabled. Particle color is computed in the fragment shader by sampling and interpolating two “palette” textures. Interpolation between two color samples is based on the time to get a smooth color change.