The second part in the Intel® Software Guard Extensions (Intel® SGX) tutorial series is a high-level specification for the application we’ll be developing: a simple password manager. Since we’re building this application from the ground up, we have the luxury of designing for Intel SGX from the start. That means that in addition to laying out our application’s requirements, we’ll examine how Intel SGX design decisions and the overall application architecture influence one another.

Read the first tutorial in the series or find the list of all of the published tutorials in the article Introducing the Intel® Software Guard Extensions Tutorial Series.

Most people are probably familiar with password managers and what they do, but it’s a good idea to review the fundamentals before we get into the details of the application design itself.

The primary goals of a password manager are to:

Password management is a growing problem for Internet users, and numerous studies have tried to quantify the problem over the years. A Microsoft study published in 2007—nearly a decade ago as of this writing—estimated that the average person had 25 accounts that required passwords. More recently, in 2014 Dashlane estimated that their US users had an average of 130 accounts, while the number of accounts for their worldwide users averaged in the 90s. And the problems don’t end there: people are notoriously bad at picking “good” passwords, frequently reusing the same password on multiple sites, which has led to some spectacular attacks. These problems boil down to two basic issues: passwords that are hard for hacking tools to guess are often difficult for people to remember, and having a greater number of passwords makes this problem more complex by having to remember which password is associated with which account.

Our goal in this tutorial is to build a simple password manager that provides the same core functions as a commercial product while following good security practices and use that as a learning vehicle for designing for Intel SGX. The tutorial password manager, which we’ll name the “Tutorial Password Manager with Intel® Software Guard Extensions” (yes, that’s a mouthful, but it’s descriptive), is not intended to function as a commercial product and certainly won’t contain all the safeguards found in one, but that level of detail is not necessary.

Some basic application requirements will help narrow down the scope of the application so that we can focus on the Intel SGX integration rather than the minutiae of application design and development. Again, the goal is not to create a commercial product: the Tutorial Password Manager with Intel SGX does not need to run on multiple operating systems or on all possible CPU architectures. All we require is a reasonable starting point.

To that end, our basic application requirements are:

The first requirement may seem strange given that this tutorial series is about Intel SGX application development, but real-world applications need to consider the legacy installation base. For some applications it may be appropriate to restrict execution only to Intel SGX-capable platforms, but for the Tutorial Password Manager we’ll use a less rigid approach. An Intel SGX-capable platform will receive a hardened execution environment, but non-capable platforms will still function. This usage is appropriate for a password manager, where the user may need to synchronize his or her password database with other, older systems. It is also a learning opportunity for implementing dual code paths.

The second requirement gives us access to certain cryptographic algorithms in the non-Intel SGX code path and to some libraries that we’ll need. The 64-bit requirement simplifies application development by ensuring access to native 64-bit types and also provides a performance boost for certain cryptographic algorithms that have been optimized for 64-bit code.

The third requirement gives us access to the RDRAND instruction in the non-Intel SGX code path. This greatly simplifies random number generation and ensures access to a high-quality entropy source. Systems that support the RDSEED instruction will make use of that as well. (For information on the RDRAND and RDSEED instructions, see the Intel® Digital Random Number Generator Software Implementation Guide.)

The fourth requirement keeps the list of software required by the developer (and the end user) as short as possible. No third-party libraries, frameworks, applications, or utilities need to be downloaded and installed. However, this requirement has an unfortunate side effect: without third-party frameworks, there are only four options available to us for creating the user interface. Those options are:

The first two are implemented in native/unmanaged code while the latter two require .NET*.

For the Tutorial Password Manager, we’re going to be developing the GUI using Windows Presentation Foundation in C#. This design decision impacts our requirements as follows:

Why use WPF? Mostly because it simplifies the UI design while introducing complexity that we actually want. Specifically, by relying on the .NET Framework, we have the opportunity to discuss mixing managed code, and specifically high-level languages, with enclave code. Note, though, that choosing WPF over Windows Forms was arbitrary: either environment would work.

As you might recall, enclaves must be written in native C or C++ code, and the bridge functions that interact with the enclave must be native C (not C++) functions. While both Win32 APIs and MFC provide an opportunity to develop the password manager with 100-percent native C/C++ code, the burden imposed by these two methods does nothing for those who want to learn Intel SGX application development. With a GUI based in managed code, we not only reap the benefits of the integrated design tools but also have the opportunity to discuss something that is of potential value to Intel SGX application developers. In short, you aren’t here to learn MFC or raw Win32, but you might want to know how to glue .NET to enclaves.

To bridge the managed and unmanaged code we’ll be using C++/CLI (C++ modified for Common Language Infrastructure). This greatly simplifies the data marshaling and is so convenient and easy to use that many developers refer to it as IJW (“It Just Works”).

At the core of the password manager is the password database, or what we’ll be referring to as the password vault. This is the encrypted file that will hold the end user’s account information and passwords. The basic requirements for our tutorial application are:

The requirement that the vault be portable means that we should be able to copy the vault file to another computer and still be able to access its contents, whether or not they support Intel SGX. In other words, the user experience should be the same: the password manager should work seamlessly (so long as the system meets the base hardware and OS requirements, of course).

Encrypting the vault at rest means that the vault file should be encrypted when it is not actively in use. At a minimum, the vault must be encrypted on disk (without the portability requirement, we could potentially solve the encryption requirements by using the sealing feature of Intel SGX) and should not sit decrypted in memory longer than is necessary.

Any account information is sensitive information for a variety of reasons, not the least of which is that it tells an attacker exactly which logins and sites to target, but the passwords are arguably the most critical piece of the vault. Knowing what account to attack is not nearly as attractive as not needing to attack it at all. For this reason, we’ll introduce additional requirements on the passwords stored in the vault:

This is nesting the encryption. The passwords for each of the user’s accounts are encrypted when stored in the vault, and the entire vault is encrypted when written to disk. This approach allows us to limit the exposure of the passwords once the vault has been decrypted. It is reasonable to decrypt the vault as a whole so that the user can browse their account details, but displaying all of their passwords in clear text in this manner would be inappropriate.

An account password is only decrypted when a user asks to see it. This limits its exposure both in memory and on the user’s display.

With the encryption needs identified it is time to settle on the specific cryptographic algorithms, and it’s here that our existing application requirements impose some significant limits on our options. The Tutorial Password Manager must provide a seamless user experience on both Intel SGX and non-Intel SGX platforms, and it isn’t allowed to depend on third-party libraries. That means we have to choose an algorithm, and a supported key and authentication tag size, that is common to both the Windows CNG API and the Intel SGX trusted crypto library. Practically speaking, this leaves us with just one option: Advanced Encryption Standard-Galois Counter Mode (AES-GCM) with a 128-bit key. This is arguably not the best encryption mode to use in this application, especially since the effective authentication tag strength of 128-bit GCM is less than 128 bits, but it is sufficient for our purposes. Remember: the goal here is not to create a commercial product, but rather a useful learning vehicle for Intel SGX development.

With GCM come some other design decisions, namely the IV length (12 bytes is most efficient for the algorithm) and the authentication tag.

Not all of these are necessarily critical or relevant to the Tutorial Password Manager, but it’s a good security practice nonetheless.

The final requirement, building the KDF around SHA-256, comes from the constraint that we find a hashing algorithm common to both the Windows CNG API and the Intel SGX trusted crypto library.

The last of the high-level requirements is what actually gets stored in the vault. For this tutorial, we are going to keep things simple. Figure 2 shows an early mockup of the main UI screen. 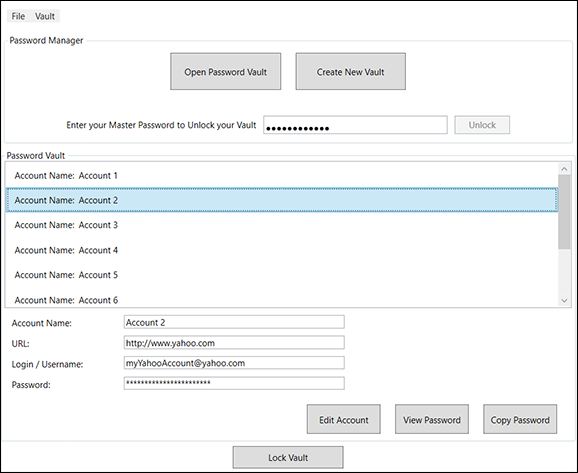 The last requirement is all about simplifying the code. By fixing the number of accounts stored in the vault, we can more easily put an upper bound on how large the vault can be. This will be important when we start designing our enclave. Real-world password managers do not, of course, have this luxury, but it is one that can be afforded for the purposes of this tutorial.

In part 3 of the tutorial we’ll take a closer look at designing our Tutorial Password Manager for Intel SGX. We’ll identify our secrets, which portions of the application should be contained inside the enclave, how the enclave will interact with the core application, and how the enclave impacts the object model. Stay tuned!

Get Started with the SDK