Software applications frequently need to work with private information such as passwords, account numbers, financial information, encryption keys, and health records. This sensitive data is intended to be accessed only by the designated recipient. In Intel SGX terminology, this private information is referred to as an application’s secrets.

The operating system’s job is to enforce security policy on the computer system so that these secrets are not unintentionally exposed to other users and applications. The OS will prevent a user from accessing another user’s files (unless permission to do so has been explicitly granted), one application from accessing another application’s memory, and an unprivileged user from access OS resources except through tightly controlled interfaces. Applications often employ additional safeguards, such as data encryption, to ensure that data sent to storage or over a network connection cannot be accessed by third parties even if the OS and hardware are compromised.

Despite these protections, there is still a significant vulnerability present in most computer systems: while there are numerous  guards in place that protect one application from another, and the OS from an unprivileged user, an application has virtually no protection from processes running with higher privileges, including the OS itself. Malware that obtains administrative privileges has unrestricted access to all system resources and all applications running on the system. Sophisticated malware can target an application’s protection schemes to extract encryption keys and even the secret data itself directly from memory.

To enable the high-level protection of secrets and help defend against these software attacks, Intel designed Intel SGX. Intel SGX is a set of CPU instructions that enable applications to create enclaves: protected areas in the application’s address space that provide confidentiality and integrity even in the presence of privileged malware. Enclave code is enabled by using special instructions, and it is built and loaded as a Windows* Dynamic Link Library (DLL) file.

Intel SGX can reduce the attack surface of an application. Figure 1 demonstrates the dramatic difference between attack surfaces with and without the help of Intel SGX enclaves.

There is a hard limit on the size of the protected memory, set by the system BIOS, and typical values are 64 MB and 128 MB. Some system providers may make this limit a configurable option within their BIOS setup. Depending on the footprint of each enclave, you can expect that between 5 and 20 enclaves can simultaneously reside in memory.

Application design with Intel SGX requires that the application be divided into two components (see Figure 3):

The trusted component should be as small as possible, limited to the data that needs the most protection and those operations that must act directly on it. A large enclave with a complex interface doesn’t just consume more protected memory: it also creates a larger attack surface.

Enclaves should also have minimal trusted-untrusted component interaction. While enclaves can leave the protected memory region and call functions in the untrusted component (through the use of a special instruction), limiting these dependencies will strengthen the enclave against attack. 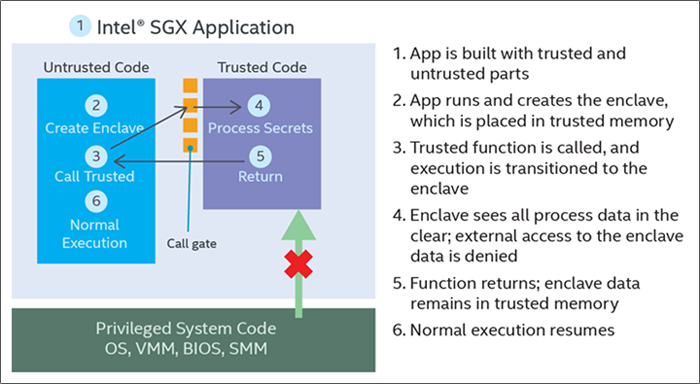 In the Intel SGX architecture, attestation refers to the process of demonstrating that a specific enclave was established on a platform. There are two attestation mechanisms:

Local attestation is useful when applications have more than one enclave that need to work together to accomplish a task or when two separate applications must communicate data between enclaves. Each enclave must verify the other in order to confirm that they are both trustworthy. Once that is done, they establish a protected session and use an ECDH Key Exchange to share a session key. That session key can be used to encrypt the data that must be shared between the two enclaves.

Because one enclave cannot access another enclave’s protected memory space, even when running under the same application, all pointers must be dereferenced to their values and copied, and the complete data set must be marshaled from one enclave to the other.

With remote attestation, a combination of Intel SGX software and platform hardware is used to generate a quote that is sent to a third-party server to establish trust. The software includes the application’s enclave, and the Quoting Enclave (QE) and Provisioning Enclave (PvE), both of which are provided by Intel. The attestation hardware is the Intel SGX-enabled CPU. A digest of the software information is combined with a platform-unique asymmetric key from the hardware to generate the quote, which is sent to a remote server over an authenticated channel. If the remote server determines that the enclave was properly instantiated and is running on a genuine Intel SGX-capable processor, it can now trust the enclave and choose to provision secrets to it over the authenticated channel.

Sealing data is the process of encrypting it so that it can be written to untrusted memory or storage without revealing its contents. The data can be read back in by the enclave at a later date and unsealed (decrypted). The encryption keys are derived internally on demand and are not exposed to the enclave.

There are two methods of sealing data:

Sealing to the Enclave Identity

Sealing to the Sealing Identity

When sealing to the sealing identity, multiple enclaves from the same authority can transparently seal and unseal each other’s data. This allows data from one version of an enclave to be migrated to another, or to be shared among applications from the same software vendor.

If older versions of the software and enclave need to be prevented from accessing data that is sealed by newer application versions, the authority can choose to include a Software Version Number (SVN) when signing the enclave. Enclave versions older than the specified SVN will not be able to derive the sealing key and thus will be prevented from unsealing the data.

We’ve described the three key components of Intel SGX: enclaves, attestation, and sealing. For this tutorial, we’ll focus on implementing enclaves since they are at the core of Intel SGX. You can’t do attestation or sealing without establishing an enclave in the first place. This will also keep the tutorial to a manageable size.

Find the list of all the tutorials in this series in the article Introducing the Intel® Software Guard Extensions Tutorial Series.