Image recognition with machine learning techniques has achieved significant growth due to advances in recent years in both algorithmic efficiency and hardware performance. Even with these advances, image pre-processing of raw images remains a critical step, especially in larger datasets. There are variety of methods to pre-process images, but the SIFT + Bag-of-Words (BoW) routine has gained popularity for its straight forward approach.

This article will discuss the application and comparison of SIFT + Bag-of-Words on two different data analytics machine learning libraries, scikit-learn* and Intel® Data Analytics Acceleration Library (Intel® DAAL). It will start with batch processing, then move on to utilize Intel DAAL distributed processing mode interfaced with the open-source mpi4py application. scikit-learn is a popular Python* module with a mature set of features and easy to use API. Its ease-of-use is well-known, but in some areas it lacks in speed and in the ability to distribute, which will serve as the basis for this article's comparison.1

Description of the SIFT and Bag-of-Words Routine

SIFT (Scale-Invariant Feature Transform) algorithm is an emergent image processing technique used to identify important features in raw images and convert them to usable numerical format. SIFT detects interest points in an image, then transforms the points into both scale and rotationally invariant vectors containing 128 dimensions. The resulting vectors are called key descriptors. SIFT generates 0 to m descriptors for each image producing a matrix with m x 128 elements; where m represents the number of interest points identified by SIFT algorithm.

As described in the SIFT section, SIFT features detected on each image are comprised of m x 128 key descriptors, where m is the number of interest points in an image. Images will have various m values based on the number of points the SIFT algorithm identifies as interesting. A full stacked list of key descriptors for all images (in) under study are gathered in a common feature space, where similar key descriptors are clustered with the k-means algorithm and subsequently assigned to a cluster or bin. Finally, a histogram of these bins are generated for each individual image resulting in a final matrix size of inx k.

The dataset used for this work is an internal image set, contributed to by Intel employees. Photographs were taken around the Hillsboro, OR campus, as well as employee's homes. Examples of subjects are a person's shoes, bedroom pictures, and cubicle shots of keyboard, monitors, and chairs. The full set includes many examples of each type, for instance, 20 different sets of shoes. The image set was manually labeled into rough classes (shoes, chairs, monitors, etc..) and saved. There were 720 image files of 1920 x 1080 pixels, totaling ~0.6 GBs on disk. 4 million SIFT features vectors were extracted, each with 128 features. The authors are prohibited from showing the images to the public, as they are only for internal benchmarking and testing.

As described above, the bag-of-words model collapses extracted SIFT features into a single feature vector by binning based on number of occurrences of a given type. Type in this case is assigned by using a clustering classifier. k-means is the most commonly used clustering algorithm for these purposes, and the quality of the clustering is governed by the number of k chosen during the fit. A downside of employing the k-means algorithm is that the user must supply the k (number of clusters) value before fitting. If k is too low, the resulting assignment and distance measurements will be weak. If k is too high, downstream work is more likely to bottleneck due to increased noise in the system. Often k is hard to assign without some trial and error. Basic search tuning is a common solution, where a user decides on a scoring function, and plots the score with various values of k. Figure 1 is a plot of k tuning, using the accuracy of a downstream Random Forest classifier as the scorer. 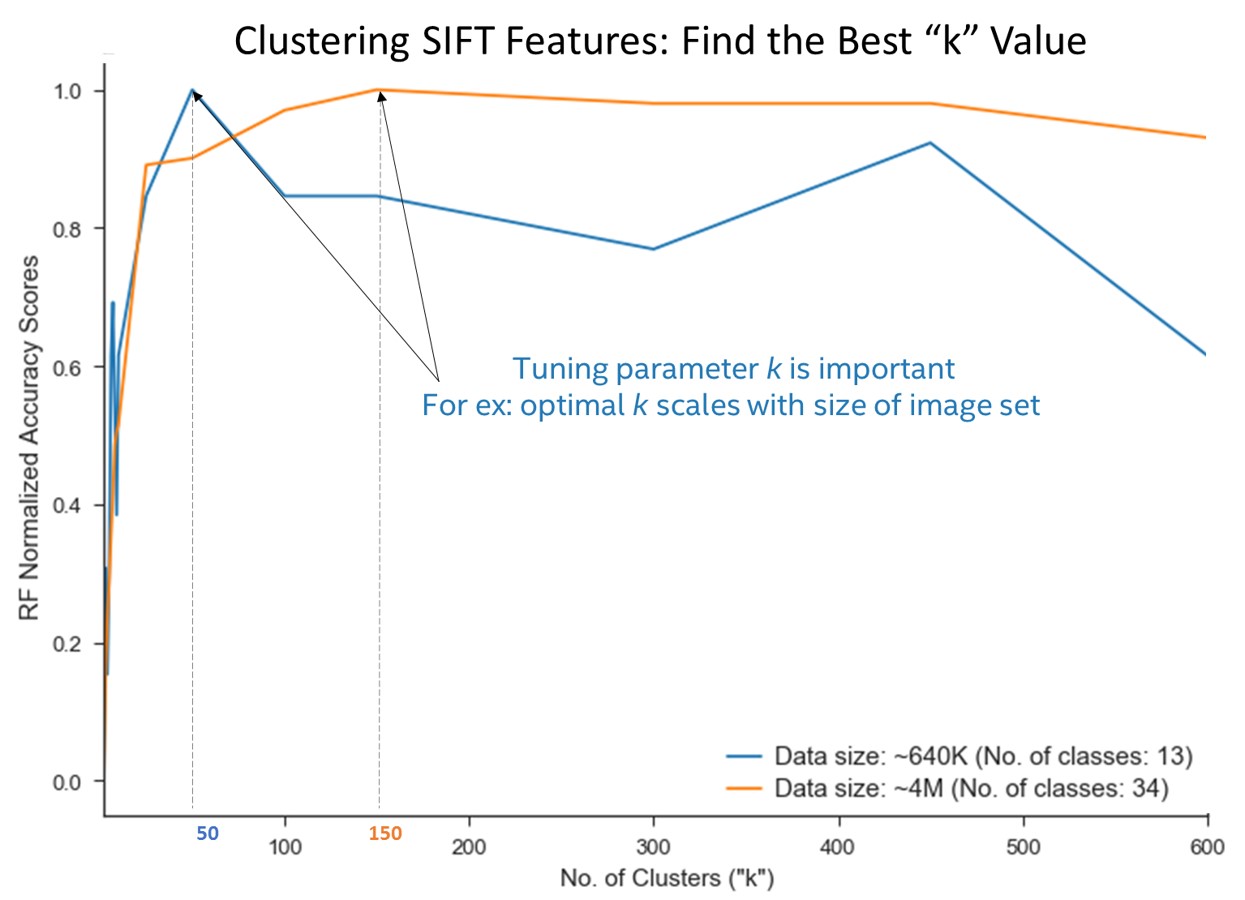 Figure 1 includes two different sized datasets, consisting of 13 classes (640 K SIFT features vectors) and 34 classes (4 million SIFT features vectors), each with 128 features. It is clear that each line plot presents an elbow where score is maximized, but cluster number is kept low. It is also clear that collection of these data points requires many k-means algorithm fits in succession. As such, speed and scalability of these fits is extremely important. Needless to say, if fitting on.

4M x 128 data set for 20 or 50 k took ~5-10 hours, tuning for k would be an unsustainable proposition. In addition, k-means is susceptible to local minima, so many users will fit multiple times for a given k.2

A proper tuning of ML hyperparameters should include lead-room on either side of the optimal position to ensure avoidance of local minima. In other words, the more parameter positions visited during the tuning process, the more reliable the outcome for the user. To this end, tuning speed is the key to a sustainable approach to finding correct k values in the visual bag-of-words routine. Figure 2 below plots execution time vs k tuning results using PyDAAL and base-Python scikit-learn clustering implementations. 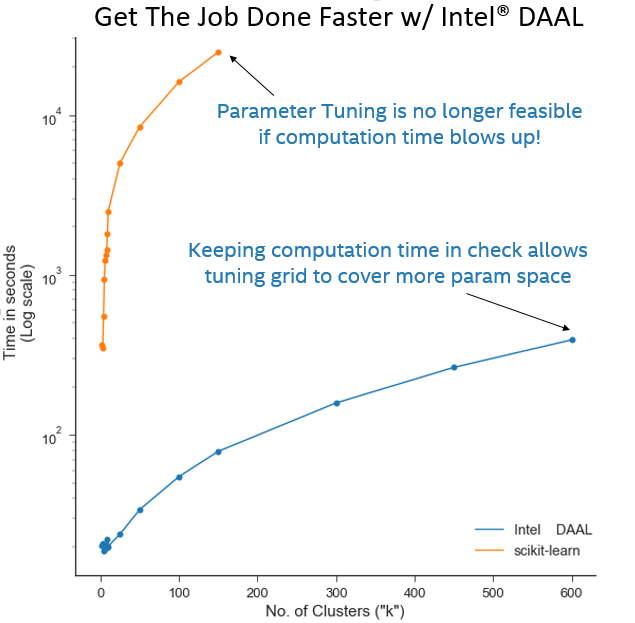 Figure 2 shows result of tuning k with log execution time on the y-axis. The two series are results for PyDAAL (blue) and base-Python scikit-learn (orange) clustering implementations. The Dataset consisted of 34 classes (4 million SIFT features vectors), with 128 features. Figure 1 showed optimal k for this dataset at a value of 150. A proper parameter search for k should span positions above and below k = 150. The scikit-learn curve stops at 150 k due to an unsustainable execution time of ~26k seconds. Therefore a proper parameter search with scikit-learn would only be possible with days or weeks allotted for tuning of a single batch. For reference, the entire PyDAAL plot was collected in less time than the k = 150 data point on the scikit-learn series.

As the size of SIFT-extracted dataset rises, even the high performance PyDAAL implementation of k-means algorithm will become ill-fitted for proper fitting. At some point the one-shot, all-at-once fitting approach (aka batch) must be discarded and the distributed approach inserted. Scikit-learn is a mature library and a pioneer in usability and workflow enabling, but its lacks support for this sort of distributed fitting.

PyDAAL includes a host of classes, built especially for allowing the user to insert into current distribution infrastructure. PyDAAL provides methods for splitting the data into chunks, sending in serialized form, deserializing, partial fitting, and collective reduction for finalizing splits. The PyDAAL distributed methods work like primitives, and allow the user to use any communication strategy they desire. The binding module utilized in this exercise is Mpi4Py module which calls Intel MPI under the hood. The data collection below summarizes k tuning on a large dataset which consists of 16 million SIFT vectors with 128 features. 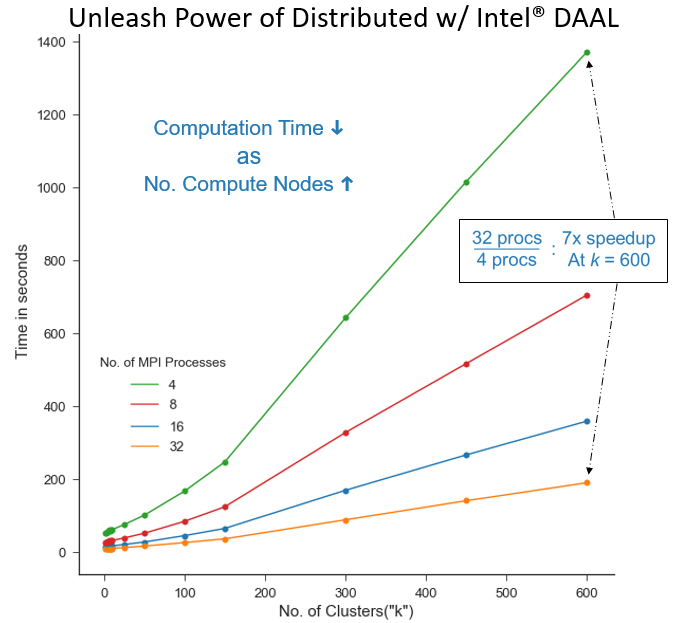 Figure 3 Demonstrates using PyDAAL in distributed mode to tune k for a large dataset (16 million SIFT features vectors with 128 features). The computation time of k-means fitting scales inversely with number of processors. For example the recorded data points for k = 600 at 4 and 32 MPI processes are 901s and 127s, respectively. That is a 7x speedup from distributing the computation among 8x processes. Considering the 8x speedup would be the theoretical maximum, PyDAAL's implementation is highly efficient. This allows Python programmers to pull maximum power out of their hardware clusters and lower the time it takes to tune hyperparameters, all without writing complicated control logic code.3

Conclusion and Call to Action

PyDAAL is a fast and powerful analytics library. An important advantage of PyDAAL over scikit-learn is in the computation time required during algorithm fitting. Often users need to tune hyperparameters by varying across a parameter space and scoring the output with some sort of quality metric. The increased speed of the each PyDAAL algorithm fit allows for more parameter space and increments in a user's grid search coverage. Furthermore, as datasets grow to exceed in-machine memory capacity, PyDAAL can be used to distribute calculations across multiple machines. PyDAAL's k-means distributed implementation is very efficient and adds speedup commensurate with the increased number of resources made available without the users writing complicated control logic. Get started with PyDAAL as a part of the free Intel® Distribution of Python today and feel free to harvest the code from the below code sections for your own work.

How to Run the Snippets?

To experiment Batch processing, Run Code Sections A, B and C together as a single script

To experiment Distributed processing, Run Code Section A  with additional codelines as shown below to save the SIFT array

Save code section D as script.py and run the Linux* bash command as shown at the end of section D.

No. of MPI processes = No. of data partitions

Hardware Specs and Other Configuration Information