How is Netflix able to recommend videos for customers to view? How does Amazon know which products to suggest to potential buyers? How does Microsoft Outlook* categorize an email as spam?

How do they do it? Netflix is able to recommend videos to customers from past viewing experience. Amazon uses data from shopper viewing and buying histories to suggests products that shoppers might likely to buy. Microsoft analyzes a huge amount of emails to determine whether or not an email is junk or spam.

It seems like Netflix, Amazon, and Microsoft have done some kind of analysis on the historical databases of some kind to come up with decisions to assist their customers with their needs. With the availability of a huge amount of data (video, audio, and text) on social media and on the Internet, there needs to be an efficient way to handle these big sets of data with minimum human intervention in order to gain more insight into how people think, behave, and interact with society and our environment.

This has led to what we call machine learning​1.

This article discusses machine learning and describes a machine learning method/algorithm called Naïve Bayes (NB)​2. It also describes how to use Intel® Data Analytics Acceleration Library (Intel® DAAL)​3 to improve the performance of an NB algorithm.

What is Machine Learning?

Machine learning (ML) is a data analysis method that is used to create an analytical model base on a set of data. That analytic model has the ability to learn without being explicitly programmed as new data is being fed to it. ML has been around for quite some time, but only recently has it proved to be useful due to the following:

Unlike supervised learning, with unsupervised learning algorithms have no labels to learn from. Instead, they have to look through input data and detect patterns on their own. For example, to categorize which region in the world a person belongs to, the algorithms have to look at the population data, identify races, religions, languages, and so on.

Figure 1 shows a simplified diagram of how ML works. First, an ML algorithm gets trained using a training data set and creates an ML model. That model processes the testing data set and, finally, the result will be predicted.

The next section discusses a type of supervised learning algorithm, the Naïve Bayes algorithm.

The Naive Bayes (NB) algorithm is a classification method based on Bayes’ theorem​6 with the assumption that all features are independent of each other.

Bayes’ theorem is represented by the following equation:

Where X and Y are features

The NB equation​2 can be written as follows:

The NB algorithm is commonly used in detecting email sorting, document categorization, email spam detection, and so on.

The diagram in Figure 2 shows how the NB algorithm works: 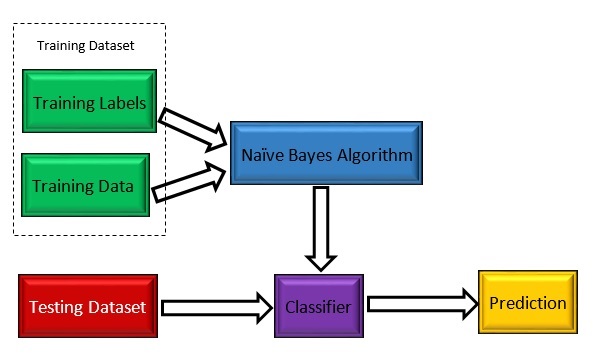 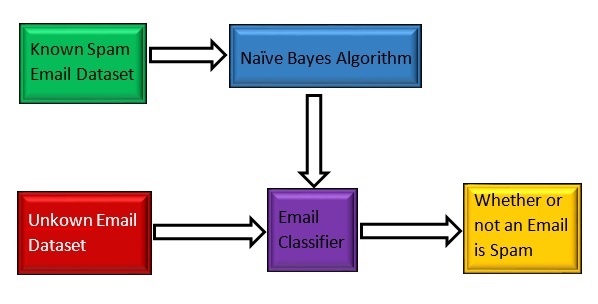 The following are some NB applications:

Advantages and Disadvantages of NB

The following are some of the advantages and disadvantages of NB.

It takes a considerable amount of time to train the model with a large data set. It can take weeks and even months to train a particular model. To help optimize this training step, Intel developed Intel DAAL.

Intel DAAL​7 is a library that consists of many basic building blocks that are optimized for data analytics and machine learning. These basic building blocks are highly optimized for the latest features of the latest Intel® processors. Multinomial Naïve Bayes classifier is one of the classification algorithms that DAAL provides. In this article, we use PyDAAL​10, the Python API of DAAL, to build a basic Naïve Bayes classifier.

This section shows how to invoke the multinomial NB algorithm​8 in Python​9 using Intel DAAL.

Do the following steps to invoke the NB algorithm from Intel DAAL:

1) Import the necessary packages using the commands from and import

a) Import Numpy using the command:

2) Create a function to split the input data set into the training data, label, and test data.

3) Restructure the training and testing dataset so it can be read by Intel DAAL.

Use the commands to reformat the data as followed (We treat ‘trainLabels’ and ‘testLabels’ as n-by-1 tables, where n is the number of lines in the corresponding datasets):

4) Create a function to train the model.

a) First create an algorithm object to train the model using the following command:

b) Pass the training data and label to the algorithm using the following commands:

5) Create a function to test the model.

a) First create an algorithm object to test/predict the model using the following command:

b) Pass the testing data and the train model to the model using the following commands:

model: Name of the model object.

The next article will explore another Intel DAAL algorithm like support vector machine (SVM).

10. How to install the Python Version of Intel DAAL in Linux*