CNNs were built at first to classify images; they do so by using successive layers of convolutions and pooling. The pooling layer in a convolutional block is used to reduce the data dimension and to achieve something called spatial invariance, which means regardless of where the object is placed in the image, it identifies the object and classifies it. While this is a powerful concept it has some drawbacks. One of them is that while performing pooling it tends to lose a lot of information, information particularly useful while performing tasks such as image segmentation and object detection. When the pooling layer loses the required spatial information about the rotation, location, scale, and different positional attributes of the object, the process of object detection and segmentation becomes very difficult. While modern CNN architecture has managed to reconstruct the positional information using various advanced techniques, they are not 100 percent accurate, and reconstruction itself is a tedious process. Another drawback of the pooling layer is that if the position of the object is slightly changed the activation doesn’t seem to change with its proportion, which leads to good accuracy in terms of image classification but poor in performance, if you want to locate exactly where the object is in the image.

To overcome such difficulties, a new approach was proposed by Geoffrey Hinton, called capsule network1. A capsule is a collection or group of neurons that stores different information about the object it is trying to identify in a given image; information mostly about its position, rotation, scale, and so on in a high dimensional vector space (8 dimension or 16 dimension), with each dimension representing something special about the object than can be understood intuitively (see Figure 4).

In computer graphics there is a concept of rendering, which simply means taking into account various internal representations of an object like its position, rotation, and scale, and converting them to an image on screen. In contrast to this approach our brain works in the opposite way, called inverse graphics. When we look at any object, we internally deconstruct it into different hierarchical sub parts, and we tend to develop a relationship between these internal parts of the whole object. This is how we recognize objects, and because of this our recognition does not depend on a particular view or orientation of the objects. This concept is the building block of capsule networks.

This is the first layer of the capsule network and this is where the process of inverse graphics takes place. Suppose you are feeding the network with the image of a boat or a house, like in the following images:

Now, these images are broken down into their sub hierarchical parts in this layer. Let’s assume for the sake of simplicity that these images are constructed out of two distinct sub parts; that is, one rectangle and one triangle.

An interesting thing about this representation is that, if we slightly rotate the object in our input image, the arrows representing these objects will also slightly rotate with proportion to its input counterpart. This slight change in input resulting in a slight change in the corresponding capsule’s output is known as equivariance. This enables the capsule networks to locate the object in a given image with its precise location, scale, rotation, and other positional attributes associated with it.

In this layer the input image is fed into a couple of convolution layers. This outputs some array of feature maps; let’s say this outputs an array of 18 feature maps. Now, we apply the Reshaping function to these feature maps and let’s say we reshape it into two vectors of nine dimensions each (18 = 2 x 9) for every location in the image, which is similar to the image above representing the rectangle and triangle capsules. Now, the last step is to make sure that the length of each vector is not greater than 1; this is because the length of each vector is the probability of whether or not that object is located in that given location in the image, so it should be between 1 and 0. To achieve this we apply something called the Squash function. This function simply makes sure that the length of each vector is between 1 and 0 and will not destroy the positional information located in higher dimensions of the vector. 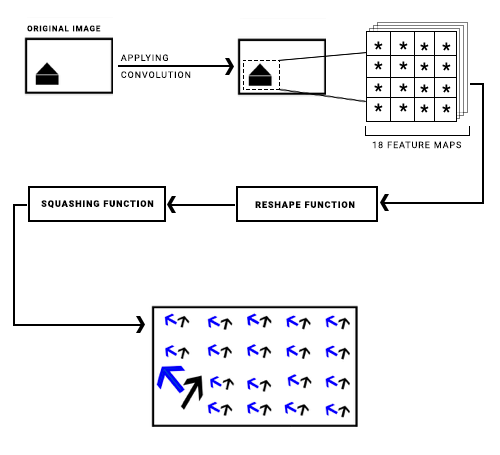 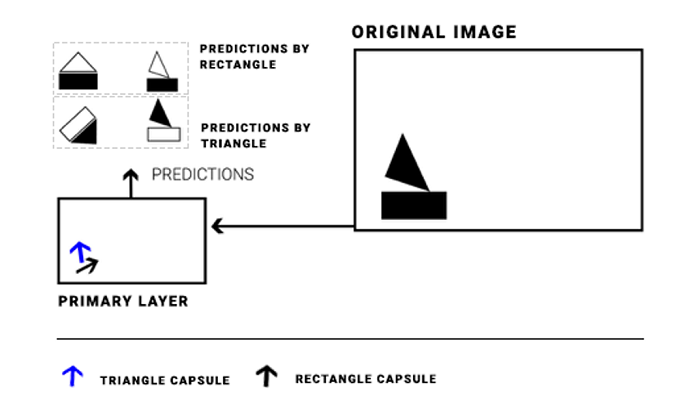 This particular technique has several benefits. Once the primary capsules agree to select a certain higher-level capsule, there is no need to send a signal to another capsule in another higher layer, and the signal in the agreed-on capsule can be made stronger and cleaner and can help in accurately predicting the pose of the object. Another benefit is that if we trace the path of the activation, from the triangle and rectangle to the boat capsule in a higher layer, we can easily sort out the hierarchy of the parts and understand which part belongs to which object; in this particular case, rectangle and triangle belong to the boat object.

So far we have dealt with the primary layer; now the actual work of the higher capsule layer comes in. Even though the primary layer predicted some output for the higher layer, it still needs to calculate its own output and cross-check which prediction matches with its own calculation. 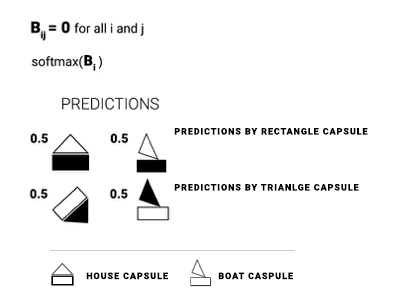 Now, after assigning the Softmax output to the predictions, it calculates the weighted sum to each capsule in this higher layer. This gives us two capsules from a bunch of predictions. This is the actual output of the higher layer for the first round or first iteration. 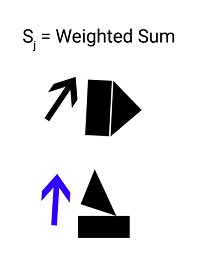 Now we can find which prediction is the most accurate compared to the actual output of the layer.

After selecting the accurate prediction, we again calculate another routing weight for the next round by scalar product of the prediction and the actual output of the layer and adding it to the existing routing weight. Given by equation: 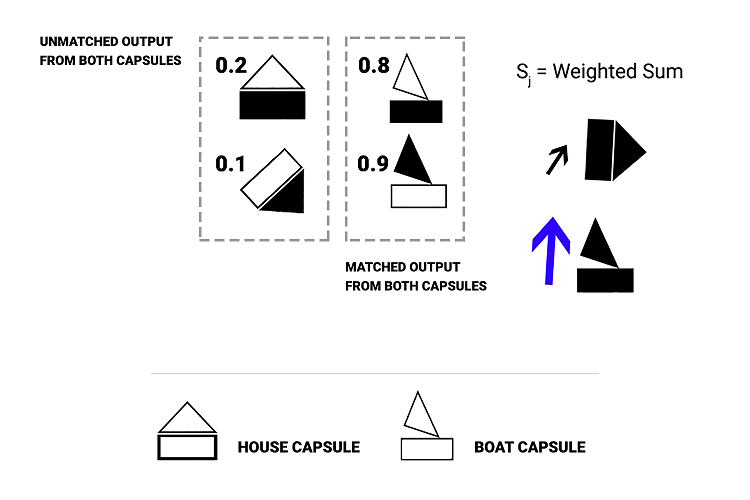 I have only described two iterations or rounds for the sake of simplicity, but actually it can take longer, depending upon the task you are performing. 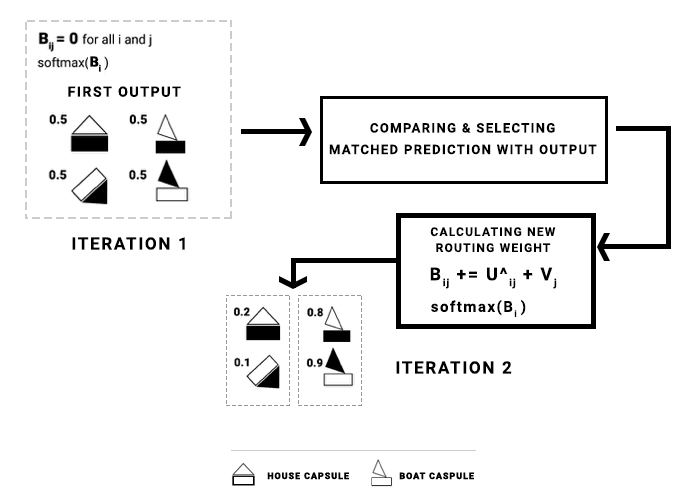 Now that we have made a decision on what object is in the image using the routing by agreement method, you can perform classification. As with our previous higher layer, one capsule per class, that is, one capsule for boat and one for house, we can easily add a layer on top of this higher layer and compute the length of the activation vector and, depending upon the length, we can assign a class probability to make an image classifier.

Suppose Vk is the length of the output vector of that class K object. Now, if that object of class K is present then its squared value should not be less than 0.9; that is, |Vk|2 >=0.9. Similarly, if the class K object is not present then |Vk|2 <=0.1.

In addition to margin loss, there is an additional unit called the decoder network connected to the higher capsule layer. This decoder network is three fully connected layers, two of them being rectified linear unit (ReLU) activated units, and the last one the sigmoid activated layer, which is used to reconstruct the input image.

Now, we have total loss as:

In the paper1, the capsule network is used to classify between MNIST* digits. As you can see below (in Figure 1), the paper showed different units of CapsNet for MNIST classification. Here, the input after feeding through two convolutional layers is reshaped and squashed to form 32 primary capsules with 6 x 6 x 8 capsules each. These primary capsules are fed into higher layer capsules, a total of 10 capsules with 16 dimensions each, and at last margin loss is calculated on these higher layer capsules to give class probability.

An interesting thing about this higher capsule layer is that each dimension on this layer is interpretable. That is, if we take the example from the paper on the MNIST dataset, each dimension from the 16-dimension activation vector can be interpreted and signifies certain characteristics of the object. If we modify one of the 16 dimensions we can play with the scale and thickness of the input; similarly, another can represent stroke thickness, another width and translation, and so on.

Let’s look at how we can implement3 it using Keras* with TensorFlow* backend. You start by importing all the required libraries:

After defining the Squash function, we can define the masking layer:

After that, let’s write the capsule layer class:

The class below will compute the length of the capsule:

The function below will compute the margin loss:

After defining the different necessary building blocks of the network we can now preprocess the MNIST dataset input for the network:

Below are some variables that will represent the shape of the input, number of output classes, and number of routings:

Now, let’s create the encoder part of the network:

Then let’s create the decoder part of the network:

Now let’s create the entire model and compile it:

To view the layers and overall architecture of the entire model, we can use this command: model.summary()

Finally, we can train the model for three epochs and find out how it will perform:

In this way, you can implement the capsule network using Keras and TensorFlow backend.

Now let’s look at some of the pros and cons of a capsule network.