In this article an OpenMP* based implementation of the Ant Colony Optimization algorithm was analyzed for bottlenecks with Intel® VTune™ Amplifier XE 2016 together with improvements using hybrid MPI-OpenMP and Intel® Threading Building Blocks were introduced to achieve efficient scaling across a four-socket Intel® Xeon® processor E7-8890 v4 processor-based system.

Transportation networks have always been used with the goal of making it easy to move goods from one location to another using the most effective means available. During the last few decades, the definition of “means” has changed to not only include the cost in terms of money but also other factors like environmental impact, energy costs, and time. With the globalization of business and supply chains, the size and complexity of such transportation networks has increased considerably. As a result the problem of optimizing transportation networks is now categorized as an NP-hard problem for which a deterministic solution is often not applicable.

With the rise of multi-core and distributed architectures, optimization techniques based on heuristics including ant colony optimization (ACO) are being developed and applied. In this paper, we baseline and analyze the bottlenecks of one such implementation of ACO and introduce additional improvements we deployed, achieving near theoretical scaling on a four-socket Intel® Xeon® processor-based system. The paper is structured as follows: 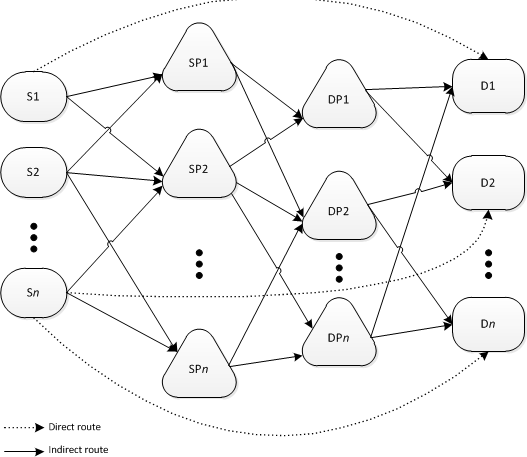 Simple computer agents within a network can probabilistically build solutions using the ACO principle. In the past we have seen the following parallel software implementations for the ACO algorithm but with some limitations.

The overall parallel architecture of our baseline ACO software is represented using the flowchart shown in Figure 2. 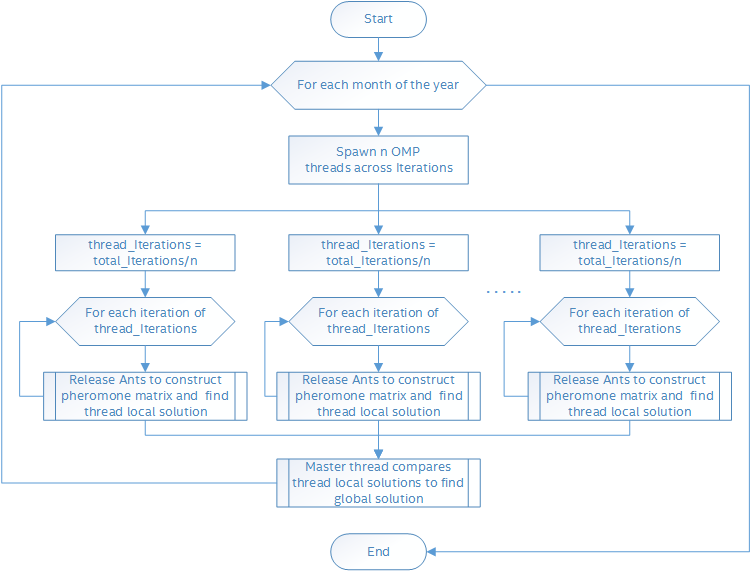 For every month of the year, a large number of iterations are run in which an ant population is released to construct the pheromone matrix contributing to a solution. Each iteration is run entirely independent of the others.

One of the quickest ways to find out whether an application is scaling efficiently with an increasing number of cores is to baseline it using a one-socket/NUMA node and then compare that to the performance when run on multiple sockets with and without hyper-threading. In an ideal scenario, two-socket systems would show double and four-socket systems would show quadruple the single-socket performance (ruling out the effects from other limitations). However, as shown in Figure 3, in our baseline tests, the application did not scale well beyond two sockets (48 cores), let alone 192 cores. 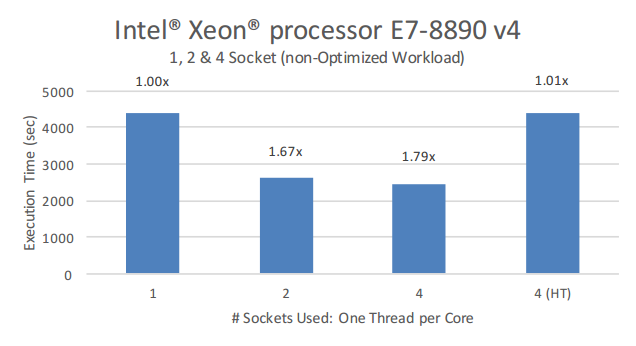 From Figure 4, it can be inferred that the application spends a large amount of time executing serially, which directly impacts the parallel CPU usage. The biggest hotspot is the string allocator from the standard string library, which did not scale well to high core counts. This makes sense since OpenMP uses a single shared pool of memory, and a huge number of thread parallel calls to string constructor or object allocator (using operator new) tends to create a memory bottleneck. And if we look at CPU Usage in the bottom-up tab (Figure 5), we find that the application uses all 96 cores, but only for short spurts.

And when mapping the algorithm to the time line, the load imbalance chart (Figure 6), shows that at the end of every month, there is a small time frame where the primary thread is doing useful computations but the rest of the threads end up spinning or sleeping.

To avoid the large pool of OpenMP threads found in the baseline implementation, we used a generic primary-secondary approach and launched multiple processes[2] across iterations. For each process (MPI rank) a relatively small number of OpenMP threads were spawned. The overload of string and object allocation is now distributed among multiple MPI processes (ranks). This hybrid MPI-OpenMP implementation of the ACO software is represented by the flowchart shown in Figure 7. 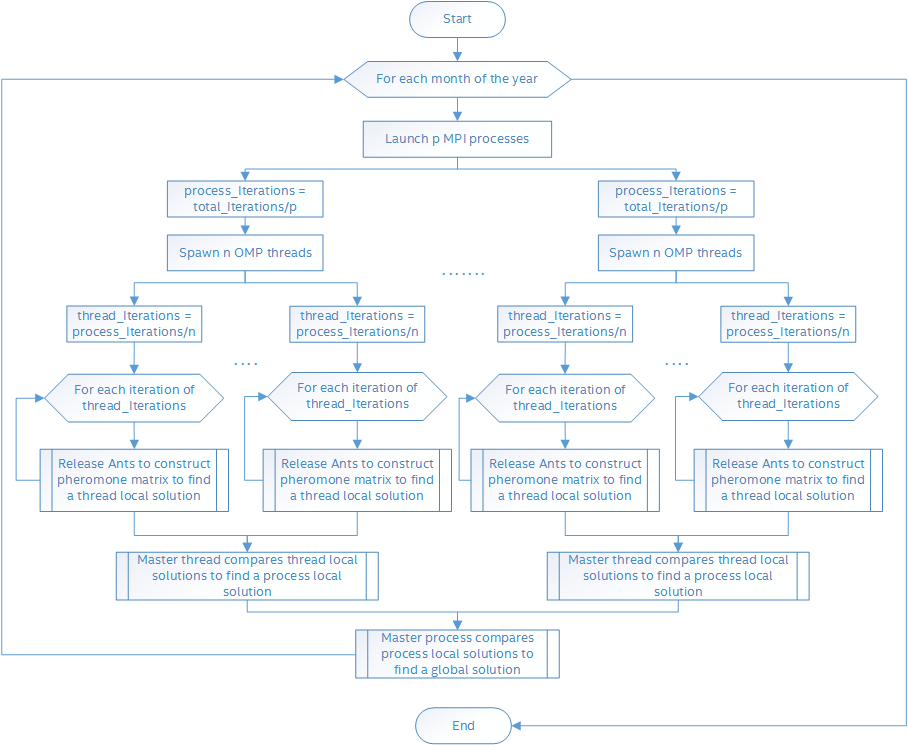 In the summary window (Figure 8) we can see that the application now spends comparatively less time in string allocations with improved CPU utilization (Figure 9a and 9b).

Figure 10 shows that the resulting load imbalance between the primary and worker threads has decreased significantly. Figure 11 shows that the CPU usage is close to 96 cores throughout the time line.

Unfortunately, we still see too much time spent in the spinning of OpenMP threads and MPI communication when the winner rank (the rank that finds the global solution) sent its solution to the primary rank to update the result files. We theorized that this was due to the overhead of MPI communication. The MPI uses a distributed memory interface wherein each process (rank) works on a separate pool of memory. As a result, modification of objects and data structures by one rank is not transparent to the other ranks and so data must be shared between ranks using MPI Send and Receive, including the monthly global solution, which must be sent to the primary.[3] This global solution is a complex C++ object, which consists of a number of derived class objects, some smart pointers with data, and other STL template objects. Since by default MPI communication does not support exchanging complex C++ objects, MPI Send and Receive requires serialization to convert the C++ object into a stream of bytes before sending and then deserialization to convert the stream back into objects upon receiving. Figure 11 shows this overhead in yellow (MPI communication) and red (Spin and Overhead).

Looking at the top hotspots for the hybrid MPI-OpenMP runs, we saw that a significant portion of execution time was used by the standard string allocation library. We thought it would be interesting to see if the dynamic memory allocation library from Intel TBB would be beneficial. Intel TBB provides several memory allocator templates that are similar to the standard template library (STL) template class std::allocator, including scalable_allocator<T> and cache_aligned_allocator<T>. These address two critical issues in parallel programming:

Scalability issues, which occur because memory allocators sometimes have to compete for a single shared pool in a way that allows only one thread to allocate at a time (due to the original serial program design).

One of the easiest ways to find out whether the application can benefit from Intel TBB dynamic memory allocation is to replace the standard dynamic memory allocation functions with the release version of the Intel TBB proxy library - libtbbmalloc_proxy.so.2. Simply load the proxy library at program load time using the LD_PRELOAD environment variable (without changing the executable file), or link the main executable file with the proxy library. 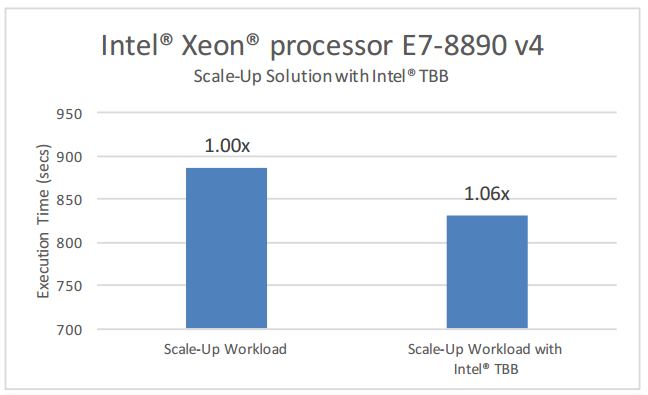 Finally, further tuning was run which experimented with different combinations of MPI ranks and OpenMP threads running the same workload. With hyperthreading turned ON, we ran the workload while maximizing the total system usage, that is, using all of the 192 logical cores.   Figure 14 shows the maximum throughput achieved when we ran a combination of 64 MPI ranks each running 3 OpenMP threads. 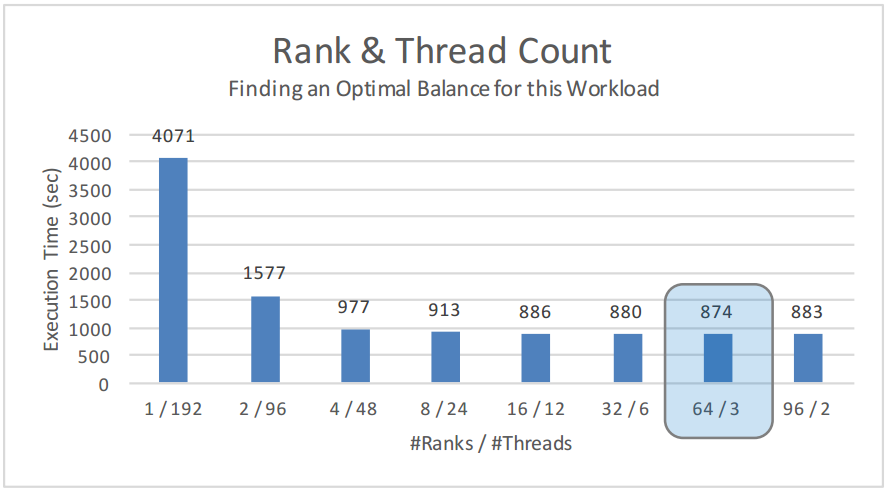 The baseline parallel software implementation of network management with ACO demonstrated thread-scaling issues with string allocators and object constructors. With Optimization 1, we achieved better CPU usage but the portion of execution time spent in string allocators was still high. With Optimization 2, the Intel TBB dynamic memory allocation proxy library supplied an additional 6 percent gain over the hybrid MPI-OpenMP version. With Optimization 3 using 64 MPI ranks each using 3 OpenMP threads, additional true scaling up to 192 cores was seen that had increased the final performance gain up to 5.30x indicating time spent with Intel VTune Amplifier and Intel TBB was well worthwhile. 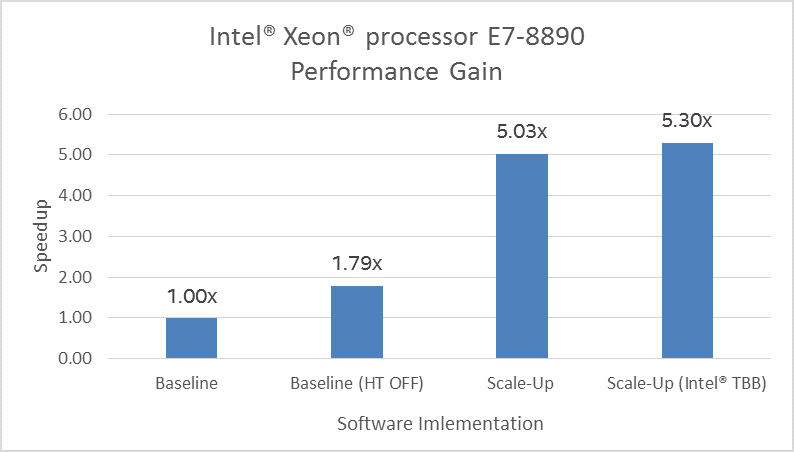 Performance testing results provided in the tables in this paper were achieved from the following test system. For more information, go to http://www.intel.com/performance. 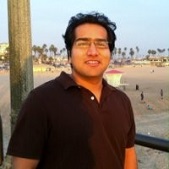 Sunny Gogar received a Master’s degree in Electrical and Computer Engineering from the University of Florida, Gainesville, and a Bachelor’s degree in Electronics and Telecommunications from the University of Mumbai, India. He is currently a software engineer with Intel Corporation's Software and Services Group. His interests include parallel programming and optimization for multi-core and many-core processor architectures.

[1] Reduced workload (384 iterations) was used with Intel VTune Amplifier to limit the size of collected sampling data. All the other benchmarking numbers presented here in this paper were generated using a full workload (1,000 iterations).

[3] The serialization overhead is constant, that is, O(1) occurring at maximum once per month (or skipped if the primary (rank 0) finds the global solution), irrespective of the number of MPI processes launched. This is critical in order to keep the MPI communication limited when we scale-up across multiple nodes