Short URL for this page: www.intel.com/software/pcm

The complexity of computing systems has tremendously increased over the last decades. Hierarchical cache subsystems, non-uniform memory, simultaneous multithreading and out-of-order execution have a huge impact on the performance and compute capacity of modern processors. 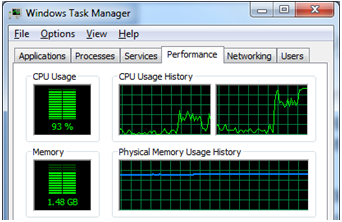 Figure 1: "CPU Utilization" measures only the time a thread is scheduled on a core

CPU utilization number obtained from operating system (OS) is a metric that has been used for many purposes like product sizing, compute capacity planning, job scheduling, and so on. The current implementation of this metric (the number that the UNIX* "top" utility and the Windows* task manager report) shows the portion of time slots that the CPU scheduler in the OS could assign to execution of running programs or the OS itself; the rest of the time is idle. For compute-bound workloads, the CPU utilization metric calculated this way predicted the remaining CPU capacity very well for architectures of 80ies that had much more uniform and predictable performance compared to modern systems. The advances in computer architecture made this algorithm an unreliable metric because of introduction of multi core and multi CPU systems, multi-level caches, non-uniform memory, simultaneous multithreading (SMT), pipelining, out-of-order execution, etc.

Figure 2: The complexity of a modern multi-processor, multi-core system

A prominent example is the non-linear CPU utilization on processors with Intel® Hyper-Threading Technology (Intel® HT Technology). Intel® HT technology is a great performance feature that can boost performance by up to 30%. However, HT-unaware end users get easily confused by the reported CPU utilization: Consider an application that runs a single thread on each physical core. Then, the reported CPU utilization is 50% even though the application can use up to 70%-100% of the execution units. Details are explained in [1].

A different example is the CPU utilization for "memory throughput"-intensive workloads on multi-core systems. The bandwidth test "stream" already saturates the capacity of memory controller with fewer threads than there are cores available.

The good news is that Intel processors already provide the capability to monitor performance events inside processors. In order to obtain a more precise picture of CPU resource utilization we rely on the dynamic data obtained from the so-called performance monitoring units (PMU) implemented in Intel's processors. We concentrate on the advanced feature set available in the current Intel® Xeon® 5500, 5600, 7500, E5, E7 and Core i7 processor series [2-4].

We have implemented a basic set of routines with a high level interface that are callable from user C++ application and provide various CPU performance metrics in real-time. In contrast to other existing frameworks like PAPI* and Linux* "perf" we support not only core but also uncore PMUs of Intel processors (including the recent Intel® Xeon® E7 processor series). The uncore is the part of the processor that contains the integrated memory controller and the Intel® QuickPath Interconnect to the other processors and the I/O hub. In total, the following metrics are supported:

I want to see these counters!

As an additional goody, the package includes easy-to-use command line and graphical utilities that are based on these routines. They can be used out-of-the box by users which cannot or do not want to integrate the routines in their code but are willing to monitor and understand the CPU capacity limits in real-time.

Figure 3 shows the screen shot of the command line utility on the Windows* platform. Whereas the Linux* version can rely on the MSR kernel module that is provided with the Linux kernel, no such facility is available on Windows. For Windows, a sample implementation of a Windows driver provides a similar interface. 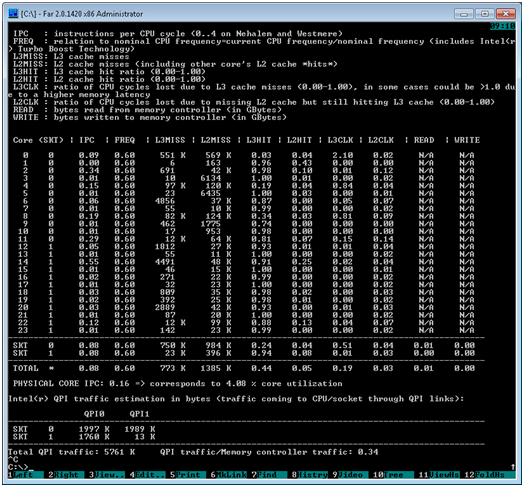 But there is more to come. For the Linux operating system, the package includes an adaptor that plugs into the KDE* utility ksysguard. Using this daemon, it is possible to graph the various metrics in real-time. Figure 4 shows a screen shot where some of the metrics are displayed during a workload run.

See figures 9 and 10 below for PCM version 2.0 versions of these screenshots. 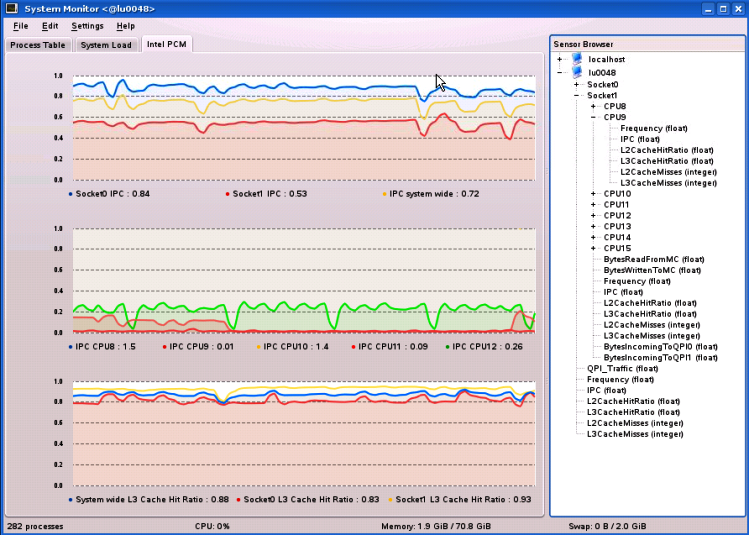 Since these utilities provide a direct insight into the system, they can even be used to quickly find and understand fundamental performance bottlenecks in real-time. (In contrast to the Intel® VTune™ Performance Analyzer, they won't however tell you what parts of the application are causing the performance issue.)

Since version 1.5 the Intel® Performance Counter Monitor package contains a Windows* service, based on Microsoft .Net* 2.0 or better, that will create performance counters that can be shown in the Perfmon program that is delivered with the Microsoft Windows* OS. Microsoft's perfmon is capable of showing many useful performance counters on the Windows* OS like disk activity, memory usage, cpu load. More information about perfmon for Windows* 7 and Windows* 2008/R2 can be found at here (but perfmon has been available for many releases of Windows now). Please read the Windows_howto.rtf file on how to install and remove the service for Intel® PCM.

For all of the above mentioned hardware counters on the Nehalem and Westmere based platforms, a corresponding perfmon counter is created and therefore all features supported by perfmon are also available for these counters like logging over time in a file or database. For Intel Atom® processors the perfmon counters for memory and Intel® QPI bandwidth and L3 Cache Misses will always show 0 for reasons mentioned above. In a future update of Intel® Performance Counter Monitor the service will only show the available counters. 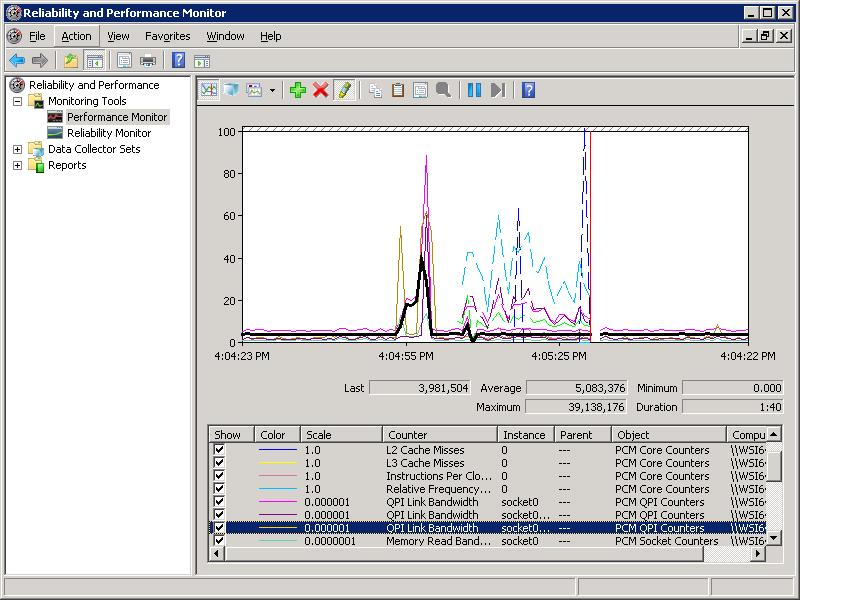 Thanks to the abstraction layer that the library provides, it has become very easy to monitor the processor metrics inside your application. Before their usage, the performance counters need to be initialized. Afterwards, the counter state can be captured before and after the code section of interest. Different routines capture the counters for cores, sockets, or the complete system, and store their state in corresponding data structures. Additional routines provide the possibility to compute the metric based on these states. The following code snippet shows an example for their usage:

To assess the potential impact of having precise resource utilization, we have implemented a simple scheduler that executed 1000 compute intensive and 1000 memory-bandwidth intensive jobs in a single thread. The challenge was the existence of non-predictable background load on the system, a rather typical situation in modern multi component systems with many third party components. Figure 6 depicts a possible schedule for a scheduler that is unaware of the background activity.

If the scheduler can detect (using the provided routines) that a lot of the memory bandwidth is currently used by a different process, it can adjust its schedule accordingly. Our simulations show that such a scheduler executes the 2000 jobs 16% faster than a generic unaware scheduler on the test system.

For general info on the Intel® Xeon® E5 processors see this page.

Below is a block diagram of the new processor from the Intel® Xeon® Processor E5-2600 Product Family Uncore Performance Monitoring Guide. 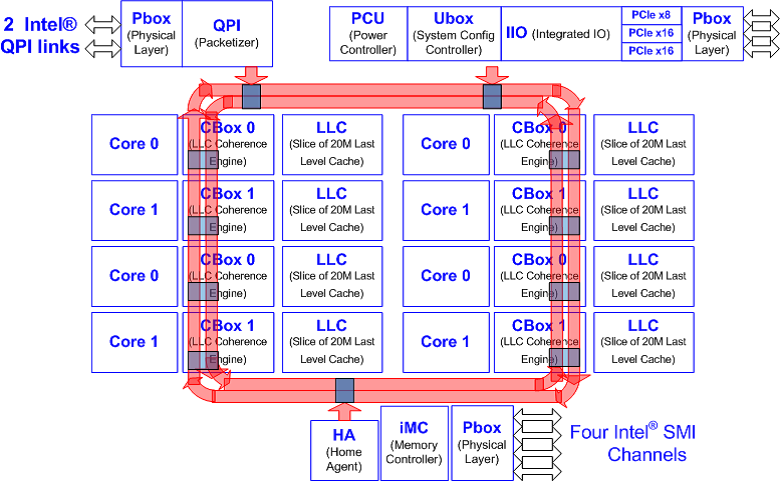 Comparing the output of 'pcm.exe 1' version 1.7 versus version 2.0 on a Xeon E7 (Westmere-EX) based system, the primary differences are:

The PCM version 2.0 information below applies to the Intel® Xeon® E5 series processor.

Please, note that availability of Intel® QPI information may depend on support of Xeon E5 uncore performance monitoring units in your BIOS and the BIOS settings.

For the Intel® Xeon® E5 series processor, PCM version 2.0 also provides the pcm-power utility. The MSVS Windows project file for this utility is in the PCM-Power_Win directory.

The pcm-power utility displays, for all cases:

Updates to plugins for Linux Ksysguard and Windows* Perfmon GUI

In addition to the command line tools the graphical plugins for Linux Ksysguard and Windows* Perfmon have been extended with essential energy related metrics (C-states, thermal headroom, processor and DRAM energy). 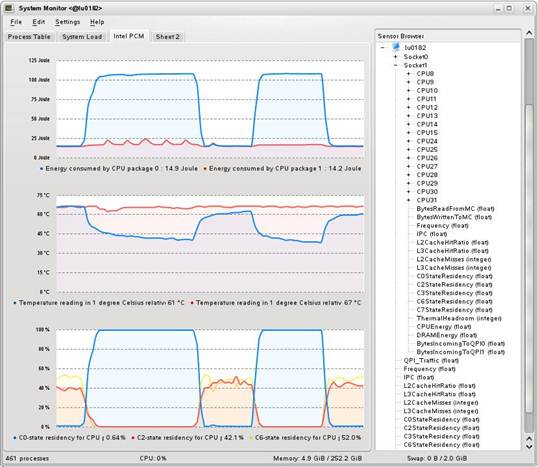 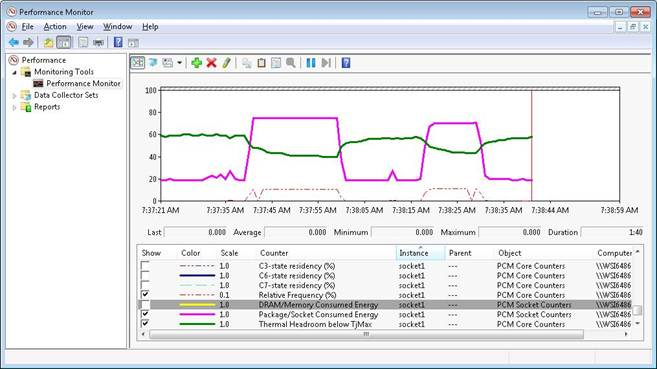 For questions and comments about Intel PCM and its use-cases, we recommend the Software Tuning, Performance Optimization & Platform Monitoring forum.

Intel, Xeon, Core, and VTune are trademarks of Intel Corporation in the U.S. and other countries. *Other names and brands may be claimed as the property of others. Intel processor numbers are not a measure of performance. Processor numbers differentiate features within each processor family, not across different processor families. Go to: http://www.intel.com/products/processor_number

Any software source code reprinted in this document is furnished under a software license and may only be used or copied in accordance with the terms of that license. The software license text is included into the code sample.

Results have been estimated based on internal Intel analysis and are provided for informational purposes only. Any difference in system hardware or software design or configuration may affect actual performance.

This software is subject to the U.S. Export Administration Regulations and other U.S. law, and may not be exported or re-exported to certain countries (Burma, Cuba, Iran, North Korea, Sudan, and Syria) or to persons or entities prohibited from receiving U.S. exports (including Denied Parties, Specially Designated Nationals, and entities on the Bureau of Export Administration Entity List or involved with missile technology or nuclear, chemical or biological weapons).