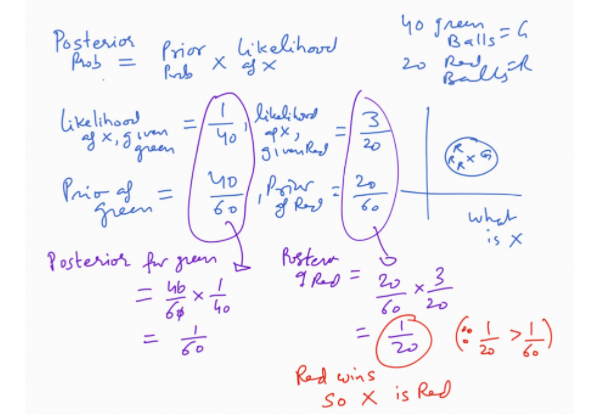 With time, machine learning algorithms are becoming increasingly complex. This, in most cases, is increasing accuracy at the expense of higher training-time requirements. Fast-training algorithms that deliver decent accuracy are also available. These types of algorithms are generally based on simple mathematical concepts and principles. Today, we’ll have a look at a similar machine-learning classification algorithm, naive Bayes. It is an extremely simple, probabilistic classification algorithm which, astonishingly, achieves decent accuracy in many scenarios.

In machine learning, naive Bayes classifiers are simple, probabilistic classifiers that use Bayes’ Theorem. Naive Bayes has strong (naive), independence assumptions between features. In simple terms, a naive Bayes classifier assumes that the presence of a particular feature in a class is unrelated to the presence of any other feature. For example, a ball may be considered a soccer ball if it is hard, round, and about seven inches in diameter. Even if these features depend on each other or upon the existence of the other features, naive Bayes believes that all of these properties independently contribute to the probability that this ball is a soccer ball. This is why it is known as naive.

Let’s better understand this with the help of a simple example. Consider a well-shuffled deck of playing cards. A card is picked from that deck at random. The objective is to find the probability of a King card, given that the card picked is red in color.

Hence, finding the posterior probability of randomly choosing a King given a Red card is:

Understanding Naive Bayes with an Example

Let’s understand naive Bayes with one more example—to predict the weather based on three predictors: humidity, temperature and wind speed. The training data is the following:

We’ll use naive Bayes to predict the weather for the following test observation:

Similarly, for the classification Rainy, the posterior is given by:

Since the posterior numerator is greater in the Sunny case, we predict the sample is Sunny.

Naive Bayes classifiers can be trained very efficiently in a supervised learning setting. In many practical applications, parameter estimation for naive Bayes models uses the method of maximum likelihood. Despite their naive design and apparently oversimplified assumptions, naive Bayes classifiers have worked quite well in many complex real-world situations.

Why is Naive Bayes so Efficient?

An interesting point about naive Bayes is that even when the independence assumption is violated and there are clear, known relationships between attributes, it works decently anyway. There are two reasons that make naive Bayes a very efficient algorithm for classification problems.

Let’s see a practical application of naive Bayes for classifying email as spam or ham. We will use sklearn.naive_bayes to train a spam classifier in Python*.

The following example will be using the MultinomialNB operation.

Creating a function to help us create a dataFrame:

Let's have a look at that dataFrame:

Now we will use a CountVectorizer to split up each message into its list of words, and throw that into a MultinomialNB classifier. Call the fit() method:

Now we are using MultinomialNB():

## This is the target

## Class is the target

## Using counts to fit the model

The classifierModel is ready. Now, let’s prepare sample email messages to see how the model works.
Email number 1 is Free Viagra now!!!, Email number 2 is A quick brown fox is not ready, and so on:

Now we are using the classifierModel to predict:

Let’s check the prediction for each email:

Therefore, the first email is spam, the second is ham, and so on.

We hope you have gained a clear understanding of the mathematical concepts and principles of naive Bayes using this guide. It is an extremely simple algorithm, with oversimplified assumptions at times, that might not stand true in many real-world scenarios. In this article we explained why naive Bayes often produces decent results, despite these facts. We feel naive Bayes is a very good algorithm and its performance, despite its simplicity, is astonishing.