By Wolfgang Engel, CEO of Confetti

At SIGGRAPH 2014 Intel measured the CPU power consumption when running a simple asteroids demo on a Microsoft Surface* Pro 3 tablet. The demo app can be switched from the DirectX 11 API to the DirectX 12 API by tapping a button. This demo draws a large number of asteroids in space at a locked framerate (/content/www/us/en/develop/blogs/siggraph-2014-directx-12-on-intel.html). It consumes less than half of the CPU power when driven by the DirectX 12 API compared to DirectX 11**, resulting in a cooler device with longer battery life. In a typical game scenario, any gains in CPU power can be invested in better physics, AI, pathfinding, or other CPU intense tasks making the game more feature rich or energy efficient.

Tools of the Trade

To develop games with DirectX 12, you need the following tools:

Set-up instructions for installing the SDK, and the GPU drivers are provided after your acceptance to the DirectX Early Access Program.

From a high-level point of view and compared to DirectX 10 and 11, the architecture of DirectX 12 differs in the areas of state management and the way resources are tracked and managed in memory.

DirectX 10 introduced state objects to set a group of states during run time. DirectX 12 introduces pipeline state objects (PSOs) used to set an even larger group of states along with shaders. This article focuses on the changes in dealing with resources and leaves the description of how states are grouped in PSOs to future articles.

Moving these resource usage patterns into the realm of the application required a new set of programming interfaces that can deal with a wide range of different GPU architectures.

The rest of this paper describes the new resource binding mechanisms, the first building block being descriptors.

For example, an SRV selects which underlying resource to use, what set of mipmaps / array slices to use, and the format to interpret the memory. An SRV descriptor must contain the GPU virtual address of the Direct3D* resource, which might be a texture. The application must ensure that the underlying resource is not already destroyed or inaccessible because it is nonresident.

Figure 1 shows a descriptor that represents a “view” into a texture:

To create a shader resource view in DirectX 12, use the following structure and Direct3D device method:

This code creates an SRV for a 2D texture and specifies its format and the GPU virtual address. The last argument to CreateShaderResourceView is a handle to what is called a descriptor heap that was allocated before calling this method. Descriptors are generally stored in descriptor heaps, detailed in the next section.

Note: It is also possible to pass some types of descriptors to the GPU through driver-versioned memory called root parameters. More on this later.

There is a descriptor heap type for CBVs, SRVs, and UAVs. There are also types that deal with render target view (RTV) and depth stencil view (DSV).

The following code creates a descriptor heap for nine descriptors—each one can be a CBV, SRV, or UAV:

Although this code sets the flag that makes the descriptor heap visible to a shader, there is one more level of indirection. A shader can “see” a descriptor heap through a descriptor table (there are also root descriptors that do not use tables; more on this later).

The primary goal with a descriptor heap is to allocate as much memory as necessary to store all the descriptors for as much rendering as possible, perhaps a frame or more

A descriptor table offsets into the descriptor heap. Instead of forcing the graphics pipeline to always view the entire heap, switching descriptor tables is an inexpensive way to change a set of resources a given shader uses. This way the shader does not have to understand where to find resources in heap space.

In other words, an application can utilize several descriptor tables that index the same descriptor heap for different shaders as shown in Figure 2: 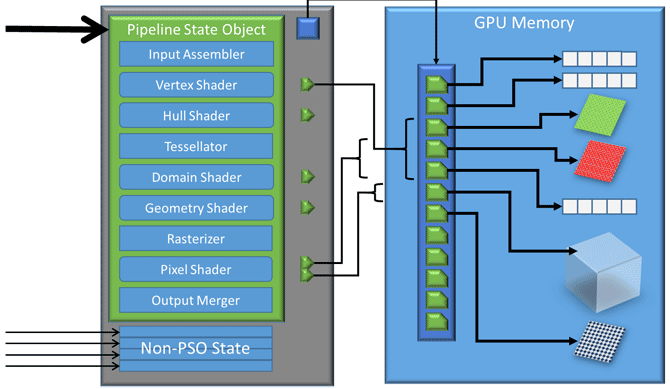 Descriptor tables for an SRV and a sampler are created in the following code snippet with visibility for a pixel shader.

Providing a flag that sets the visibility to all will broadcast the arguments to all shader stages, although it is only set once.

A root signature stores root parameters that are used by shaders to locate the resources they need access to. These parameters exist as a binding space on a command list for the collection of resources the application needs to make available to shaders.

The root arguments can be:

To achieve optimal performance, applications should generally sort the layout of the root parameters in decreasing order of change frequency.

The following code stores the two descriptor tables mentioned above as root parameters in a root signature.

All shaders in a PSO need to be compatible with the root signature specified with this PSO; otherwise, the PSO won’t be created.

A root signature needs to be set on a command list or bundle. This is done by calling:

After setting the root signature, the set of bindings needs to be defined. In the example above this would be done with the following code:

Putting it all together

The large source code snippet below shows all the mechanisms used to bind resources. This application only uses one texture, and this code provides a sampler and an SRV for this texture:

Now that you’ve seen how to create a sampler using a descriptor heap and a descriptor table, there is another way to use samplers in applications. Because many applications only need a fixed set of samplers, it is possible to use static samplers as a root argument.

The static samplers defined in a root signature are independent of samplers an application chooses to put in a descriptor heap, so both mechanisms can be used at the same time.

If the selection of samplers is truly dynamic and unknown at shader compile time, an application should manage samplers in a descriptor heap.

Furthermore, root signatures can be used to define a custom parameter space for shaders using any combination of four options:

In the end, the challenge is to pick the most desirable form of binding for the types of resources and their frequency of update.

Wolfgang is the CEO of Confetti. Confetti is a think-tank for advanced real-time graphics research and a service provider for the video game and movie industry. Before co-founding Confetti, Wolfgang worked as the lead graphics programmer in Rockstar's core technology group RAGE for more than four years. He is the founder and editor of the ShaderX and GPU Pro books series, a Microsoft MVP, the author of several books and articles on real-time rendering and a regular contributor to websites and the GDC. One of the books he edited -ShaderX4- won the Game developer Front line award in 2006. Wolfgang is in many advisory boards throughout the industry; one of them is the Microsoft’s Graphics Advisory Board for DirectX 12. He is an active contributor to several future standards that drive the Game Industry. You can find him on twitter at: wolfgangengel.  Confetti's website is www.conffx.com.

I would like to thank Chas Boyd, Amar Patel, and David Reinig for their proofreading and feedback.

** Software and workloads used in performance tests may have been optimized for performance only on Intel microprocessors. Performance tests, such as SYSmark* and MobileMark*, are measured using specific computer systems, components, software, operations, and functions. Any change to any of those factors may cause the results to vary. You should consult other information and performance tests to assist you in fully evaluating your contemplated purchases, including the performance of that product when combined with other products.