Here is a common scenario of why you should use a portable experimental environment: You start working on a new AI project on your laptop and configure your experimental environment. Faced with scalability issues because your laptop’s not powerful enough, you decide to migrate to the cloud. But your manager asks you to use a different cloud that is cheaper and supports faster computing units for training deep learning models. Then, your team adds a second data scientist and asks you to help configure the experimental environment on a new local dev machine. You repeat the configuration steps on that machine, install all the dependencies, clone the code from a repository, and then run the program. Nothing works, and you get a series of subtle warnings about the system architecture, outdated dependencies, and so on. Together with a slightly confused new team member, you resolve the issues on their machine. They commit the code, you pull it, and now the code breaks on your machine because everyone is using different versions of the framework. Sound familiar?

Each of the events in the above scenario is associated with the configuration of an experimental environment on a new machine. That process takes time and is not fun. Moreover, with time, the dependencies diverge.

In this article, we introduce the Docker* platform and describe how to use it to prepare an experimental environment for deep learning that can be easily ported to a new machine. We cover running deep learning processes within a Docker container. We also show how to train a simple neural network on a MNIST data set, which is a “Hello World” test for deep learning to make sure that everything works smoothly.

Docker supports numerous platforms. For our project, we focus on a Docker installation on macOS* (dev laptop) and on Ubuntu* (cloud workstation). There are subtle differences between the macOS and Linux* versions, but for our purposes these differences aren’t critical. We assume that you don’t have either Docker for macOS or Docker Toolbox installed yet. If you do, delete them first or skip to the next section.

Install and Run Docker* for macOS

The following commands are the same for both macOS and Linux.

To make sure that you have correctly installed Docker, open a terminal and type:

Let’s look at these one by one and introduce some additional concepts, where necessary.

Open the terminal, and then check that you have access to the Docker commands by running the "Hello, World!" container just as we did during the installation:

When you ran the command, Docker Engine 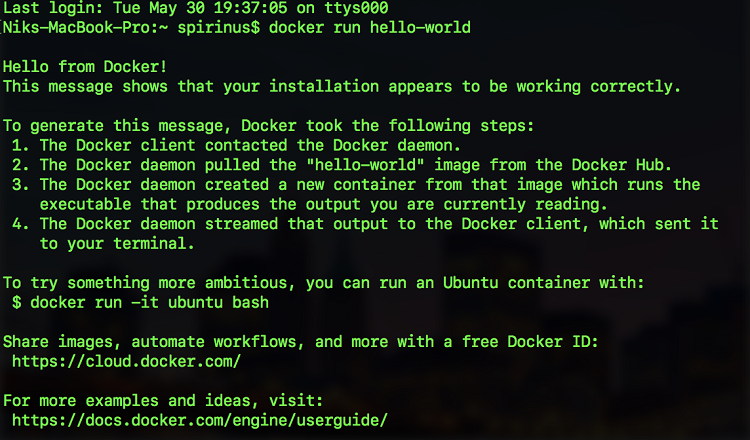 If you want to download an existing image but don’t want to run it, type:

Here, we tell Docker to pull an image created by TensorFlow. The image name is tensorflow and the image version is latest.

Next, let’s see all available images or containers (this image was cleaned up for the sake of this tutorial):

For now, there are only three images and no running containers. You can remove an image by name by typing the following command (an image can be removed if there is no container based on it):

To start a container based on an image locally:

The tensorflow/tensorflow image will start a Jupyter Notebook* on localhost:8888.

Note: Jupyter is packed by the TensorFlow team into the tensorflow/tensorflow Docker image so that you don’t have to do it yourself.

We used the following parameters:

Open a new terminal and list all containers again, which includes the TensorFlow container:

In this section, we will build our own image for deep learning, thus, completing the list of key Docker workflows.

You can build your own Docker image two ways:

We prefer building from a Dockerfile because this method is more transparent and reproducible. In a single file, you declaratively define a set of packages to install and the commands to run upon the image start, build an image, and optionally tag it with a name. The latter version might be more familiar—you log in to the container, install packages as you normally would on your local machine using an interactive Docker shell, exit the container, and then commit it—but you don’t know exactly the constitution of your image. It is just an executable file that does the job, but you will most likely have a hard time rebuilding the same image if you lose it. Therefore, we will focus on the Dockerfile approach.

The Dockerfile is based on the official tensorflow/tensorflow Dockerfile:

Step 1. Create a new folder with a file named Dockerfile inside it.

Step 2: Every image in the Docker ecosystem starts from some base image. Typically, it is some version of a Linux distribution (in our case, Ubuntu 16.04). Open the Dockerfile with your favorite text editor (we like Atom*, which is free, and Sublime*) and add this:

Step 4: Install some dependencies required for TensorFlow with the RUN command:

It executes the commands in the order listed. && ensures that all programs exit successfully, that is, the installation is correct.

Step 5: Rather than using Python*, which comes with Ubuntu, we’ll install Anaconda* and all the packages it contains to simplify our Docker configuration for deep learning:

Using RUN, we downloaded the Anaconda distribution using wget (which in turn was installed inside this Docker at Step 3). Then we ran the installation bash script and removed the installation file.

Finally, since we always want Anaconda to be on PATH, we created a startup script that just appends the conda folder to PATH. ENV command is used to set such environment variables:

Step 7: To enable Keras to visualize the architecture of the network right inside the Jupyter Notebook, let’s install some extra libraries:

Step 8: Copy sample notebooks inside the Docker image. First, create a folder inside the ai-docker folder with sample Jupyter Notebook and place the notebooks from the TensorFlow repository there.

You can use the DownGit tool to download a .zip archive with the subfolder from GitHub, and then move the archive to the ai-docker folder. Then, use the following Dockerfile command:

COPY copies a folder from the local machine to the Docker image. The path is relative to the path with the folder, where you define the Dockerfile. In our case, it is ai-docker, and hence, the notebooks are accessible in ai-docker/notebooks.

More About COPY from Docker

Step 9: Expose the TensorBoard and Jupyter ports to the outer world and set a working directory to notebooks:

Step 10: Define the command that gets called when the image is started:

We start the Jupyter Notebook on port 8888 and point it to the root/ directory. That ends the definition of the Docker image using the Dockerfile.

Now that we’ve defined a Dockerfile and supporting files (sample notebooks), let’s build a persistent portable Docker image based on it. Run the following command from the ai-docker folder:

Here, we name our new Docker image ai-docker-box . The “.” is important as it says to build the Docker image from the current directory. Docker then prints that your image has been built successfully.

If you made typos somewhere in the Dockerfile, you can run the docker build command again. The command skips the successful build steps and continues the building process from the place in a Dockerfile, where you introduced a change. That’s another great feature of Docker, which is possible due to its layered design.

Publishing an image on Docker Hub

Open your browser on localhost:8888. You’re ready to use this Docker image.

Testing the Docker Image on MNIST

We will use the Docker image in a toy project, in which we train a neural network for digits classification from images. The code comes from the official TensorFlow MNIST tutorial (one of the notebooks that we downloaded earlier). Our goal is not to demonstrate the capabilities of TensorFlow or beat the MNIST benchmark with a fancy neural network architecture but to make sure that our Dockerized experimental environment works.

Start the Docker image that we have just built, navigate to Tutorial 3 (mnist_from_scratch), and then run all cells in this Jupyter Notebook. The third to last cell will perform 916 training steps. (On a MacBook Pro* without a Touch Bar, with an Intel® Core™ i7-U6660 processor and 16 GB RAM, it took about 5 minutes). 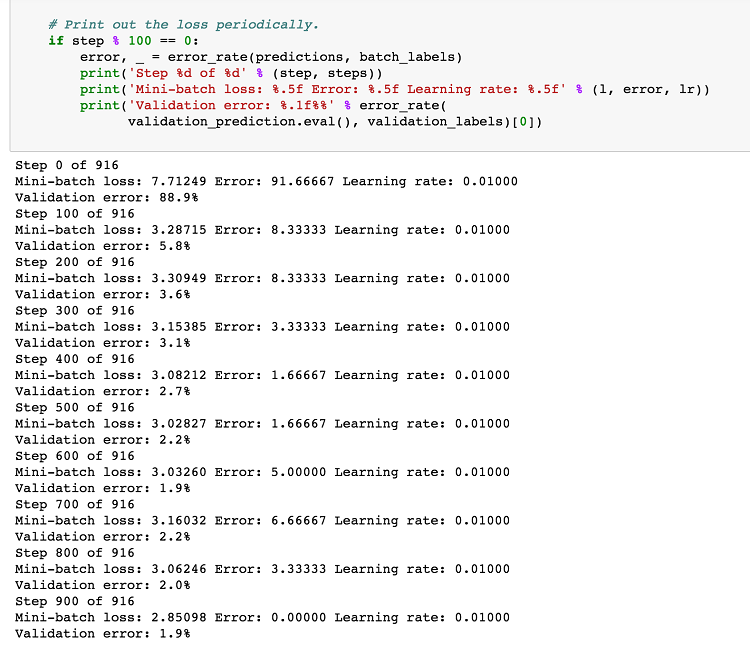 The last cell uses the trained model for scoring some hold-out data, and in our case achieves about a two percent error rate. 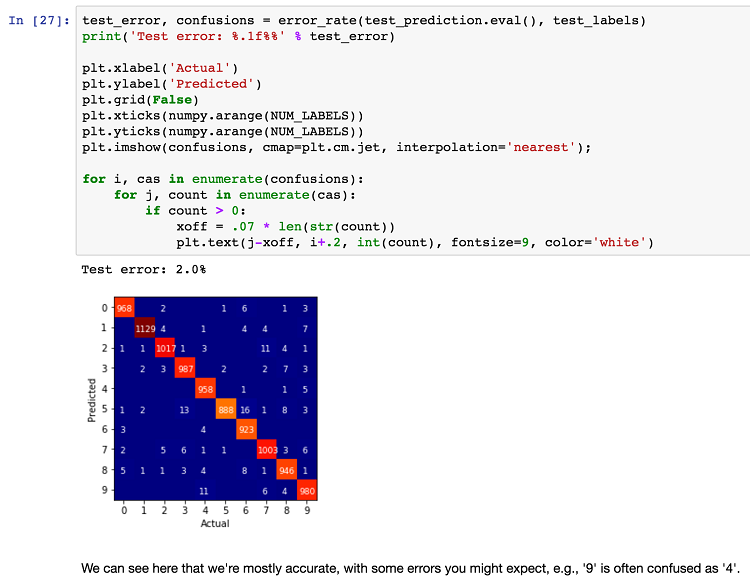 In this article, we introduced Docker, built a Docker image for deep learning, and tested it on a toy image classification problem. Rather than wasting time on repetitive tasks and to fully enjoy the power of Docker, you can simply get the Docker image that was prepared and run the corresponding Docker container on your machine. The environments are identical.