Artificial Intelligence (AI) can be used to solve a wide range of problems, including those related to computer vision, such as image recognition, object detection, and medical imaging. In the present paper we show how to integrate OpenCV* (Open Source Computer Vision Library) with a neural network backend. In order to achieve this aim, we first explain how the video stream is manipulated using a Python* programming interface and we also provide guidelines on how to use it. Finally, we discuss a working example of an OpenCV application. OpenCV is one of the packages that ship with Intel® Distribution for Python* 2018.

Today, the possibilities of artificial intelligence (AI) are accessible to almost everyone. There are a number of artificial intelligence applications and many of them require the use of computer vision techniques. One of the most currently used libraries to help detection and matching, motion estimation, and tracking is OpenCV1. OpenCV is a library of programming functions mainly aimed at real-time computer vision. Originally developed by Intel, it was later supported by Willow Garage and is now maintained by Itseez. The library is cross-platform and free for use under the open-source BSD license.

Usually, the OpenCV library is used to detect something on a video or image that is used as input for some AI application or deep learning framework like MXNet*2, Caffe*3, Caffe2*4, Torch*5, Theano*6, TensorFlow*7, and others. There are several AI applications that use computer vision, for instance:

In this work, we will make an overview of video preprocessing techniques that are used to detect some feature that may be present in a video stream, and generate images with the detected features. Our example will focus on face detection, which is used as a preprocessing phase to a face recognition system. The face recognition systems can be an AI application, a deep learning framework, or some cloud service such as Amazon Rekognition*8, Microsoft Azure* Cognitive Services9, Google Cloud Vision10, and others.

Figure 1 shows the flow diagram of the face detection process from a video stream:

The environment used for this work is composed of one surveillance camera and one computer running CentOS* 7 Linux* with the Intel® Distribution for Python 2018. Intel® Distribution for Python complies with the SciPy* Stack specification, and includes the package OpenCV and a deep learning framework such as Caffe, Intel® Math Kernel Library for Deep Neural Networks (Intel® MKL-DNN)12, Theano, or TensorFlow. Python packages have been accelerated with Intel® Performance Libraries, including Intel® Math Kernel Library (Intel® MKL), Intel® Threading Building Blocks, and Intel® Data Analytics Acceleration Library. All the aforementioned software packages have been optimized to take advantage of parallelism through the use of threading, multiple nodes, and vectorization.

Intel® Distribution for Python 2018 has improved OpenCV performance compared to OpenCV available on CentOS Linux distribution. The performance was measured by comparing the time, in seconds, it takes to compute the full-HD frames captured and processed on OpenCV. The percent gain was around 92 percent. The machine used in our test has two Intel® Xeon® E5-2630 CPU with 8 GBytes of RAM.

To capture a video stream it is necessary to create a VideoCapture* object. The input argument to create such an object can be either the device index or the name of a video file. The device index is simply the number that identifies which camera will provide images for the system. When the VideoCapture object is created, the image provided by the specified camera or video file is captured frame by frame. When the built-in laptop webcam or some external camera is used, it is possible to open the video directly in OpenCV, using the sequence of commands shown in figure 2.

Figure 3 shows the flow diagram for the backend video stream. The components used for this solution are described below.

The ffmpeg software gets input from a video camera and writes to the file named “cam.ffm”. An IP address is assigned to the video camera and an authentication system is used (“user:password”) to grant the user access to the video stream. ffmpeg uses the Real-Time Streaming Protocol (RTSP) over TCP; see Figure 4. In the present case, the Uniform Resource Identifier (URI) uses channel 1, which corresponds to the original video camera.

Finally, the OpenCV reads the “cam.mpeg” file frame by frame using the cv2.VideoCapture function, and processes the video frame by frame.

When OpenCV is correctly configured by means of the procedure described above, it reads and processes all frames from the video stream. OpenCV has several built-in pretrained classifiers for face, eyes, and smile detection, among others. We use the frontal face Haar-Cascade classifier for the detection process. The details of this classifier are given in the file named haarcascade_frontalface_default.xml.

Figure 10 shows another Python script to detect faces. Basically the idea is the same, but this script does not save the whole frame, it saves only the detected faces. The script identifies the faces and adds some margin to get more information to help the recognition software. After adding the margin, the script crops the frame and saves into a small image. Figure 9 shows the face detection internal rectangle (green) and face detection with margin in the external rectangle (blue). 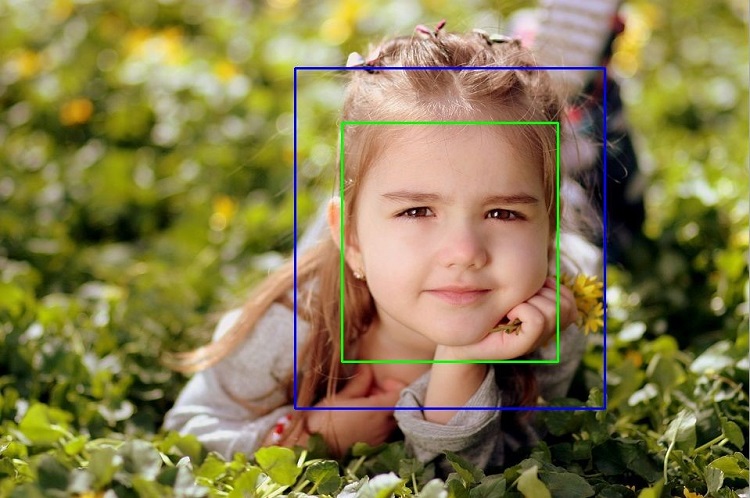 If the face recognition software is used from a cloud, the second script shown in Figure 10 is more appropriate because it saves only the face, not the entire frame, saving storage space, since the file is smaller and its upload is faster. In the examples discussed above, the frame size was around 400 KB and the face size was around 35 KB. Figure 11 shows a fragment of the code of the script for uploading a file to S3* on Amazon Web Services* (AWS). Once the upload is completed, the file is removed. This code fragment can be included in any of the previously shown scripts.