This article describes how to install and run Unity Technologies ML-Agents* in CPU-only environments. It demonstrates how to:

Unity’s ML-Agents SDK leverages TensorFlow* as the machine learning framework for training agents using a Proximal Policy Optimization (PPO) algorithm. There are several example projects included in the GitHub* download, as well as a Getting Started example and documentation on how to install and use the SDK.

One downside of the SDK for some developers is the implied dependencies on CUDA* and cuDNN* to get the ML-Agents environment up and running. As it turns out, it is possible to not only explore ML-Agents exclusively on a CPU, but also perform a custom build of TensorFlow on a Windows® 10 computer to include optimizations for Intel® architecture.

In this article we show you how to: 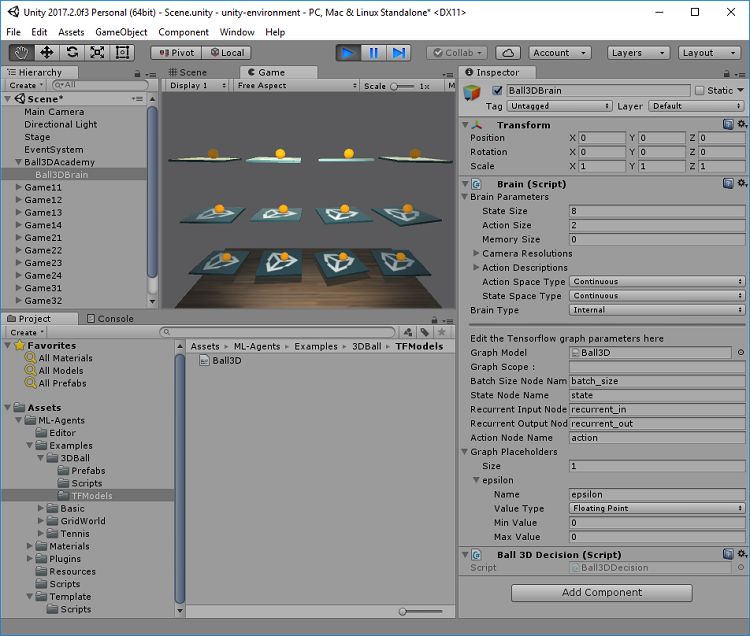 This article is intended for developers who have had some exposure to TensorFlow, Unity software, Python*, AWS, and machine learning concepts.

The following system configurations were used in the preparation of this article:

In the section on training ML-Agents in the cloud we use a free-tier Ubuntu Server 16.04 AMI.

This section describes the installation of common software components required to get the ML-Agents environment up and running. The Unity ML-Agents documentation contains an Installation and Setup procedure that links to a webpage instructing the user to install CUDA and cuDNN. Although this is fine if your system already has a graphics processing unit (GPU) card that is compatible with CUDA and you don’t mind the extra effort, it is not a requirement. Either way, we encourage you to review the Unity ML-Agents documentation before proceeding.

There are essentially three steps required to install the common software components:

This section describes how to build an optimized version of TensorFlow on your Windows 10 system.

The following TensorFlow build guidelines complement the Step-by-step Windows build instructions shown on GitHub. To get a more complete understanding of the build process, we encourage you to review the GitHub documentation before continuing.

Train ML-Agents in the Cloud

The ML-Agents documentation provides a guide titled “Training on Amazon–Web Service” that contains instructions for setting up an EC2 instance on AWS for training ML-Agents. Although this guide states, “you will need an EC2 instance which contains the latest Nvidia* drivers, CUDA8, and cuDNN,” there is a simpler way to do cloud-based training without the GPU overhead.

In this section we perform the following steps:

In the output shown in Figure 10, notice that the time (in seconds) is printed to the console after every model save. Code was added to the ppo-test.py script for this article in order to get a rough measure of the training time between model saves.

To instrument the code we made the following modifications to the Python script: