Bengali is the fourth most popular language in the world and second most popular in India. It is mostly spoken in Bangladesh and in the states of West Bengal, Assam, and Tripura in India, as indicated by the figure on the right. It is spoken by over 200 million people across the world. The Bengali language has a very rich character set. There are 10 numerals and 50 Bengali basic characters. There are also over 100 compound characters in Bengali. Hence, it is challenging to create an efficient optical character recognizer (OCR) for the same. The practical applications of OCR include visual aid for the blind, searching for desired text in images, and so on. 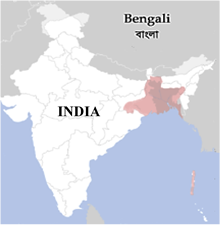 The aim of this project is to apply deep learning models for recognition of Bengali characters and numerals. For training I used publicly available datasets. I also explored how to develop a complete Bengali character recognizer (BCR).

Salient Features of the Bengali Language

The Bengali language has a rich set of 300 distinct characters. The structure of Bengali characters is also quite complex.

There are 11 vowels and 40 consonants. There are 10 Bengali numerals. These together constitute the set of basic Bengali characters.

Figure 2. The above figure shows the basic Bengali character set: (a) Bengali numerals; (b) Bengali vowels and consonants.

Bengali characters in a word are connected together by horizontal lines called matras.

Figure 4. The figure shows the matra line of Bengali words.

Many challenges are associated with developing an efficient BCR for scene images. Some of them are listed below:

Many Bengali characters have similar shapes. Also due to variations in handwriting, fonts, and so on, some characters can have different shapes. Some examples of similarly shaped characters in Bengali are one (১) and nine (৯), GH (ঘ) and J (য), and KH (খ) and TH (থ).

Figure 5. Examples of some noises in scene images: (a) Obstruction in front of text; (b) and (c) Under-illumination and over-illumination reducing clarity of text.

This project explores the development of a complete Bengali digit recognition for scene images. Following are the objectives for this project:

We need sufficiently large datasets for training the deep learning models for BCR. Following are a few standard datasets that I used in this project:

I preprocessed all the images to establish uniformity across all datasets. The final output of preprocessing is binarized images with white characters and numerals on black background. Otsu binarization and morphological transformations have been used in preprocessing for obtaining the desired form of the images. For image processing, I used the optimized OpenCV Python* library.

Figure 7. The above figure shows the form of the images before and after preprocessing

I used the LeNet-5 model with inception and dropout for deep learning. I applied the model on the above-mentioned datasets and obtained the highest accuracy of 94.7 percent for Bengali numerals corresponding to the CMATERdb numeral dataset. The total training time was approximately 20 minutes for a training set of 4,000 images, validation set, and test set of 1,000 images each. The dimensions of the images used is 28 x 28 pixels having a single channel. I saved the models for deploying in the application. The Intel® Optimization for TensorFlow* has been used for building the classifier.

The reported accuracy can be improved further using more complex deep learning models and by applying concepts of data augmentation and pretraining. But the classifier that has been developed here ensures sufficient performance for testing the proposed system.

I used Intel resources for this project. All the tasks of datasets handling, preprocessing, and deep learning were executed 2x to 3x faster in the Intel® AI DevCloud compared to my home workstation, based on the amount of training data and number of epochs. On the Intel AI DevCloud we can run our models and processes on high-performance and efficient Intel® Xeon® processors. Here, Intel® Distribution for Python* 3.6 and optimized Python libraries like OpenCV 3.1.0 and TensorFlow 1.3.1 were utilized for various tasks. OpenCV was used primarily for image processing. TensorFlow was employed for training the classifier and integrating the classifier into the application. Python Django web framework was used to develop the application and integrate the concepts discussed above.

The system that was developed can successfully identify isolated digits from any image containing Bengali numerals. All the processing is server-side; thus, it can be accessed using any regular device such as mobile, tablets, and laptops. The classifier is packaged inside the web application; hence, it is not required to deploy separately. The concepts discussed in this article can be extended to design a complete Bengali character recognition system for commercial use.

In this project, I successfully trained deep learning models to recognize isolated Bengali digits. I am currently trying to improve the accuracy of the models to ensure a high recognition rate. In the near future, I will be implementing procedures for automated text extraction and isolation from images.

Follow the project Bengali Character Recognition using Deep Learning on Intel Developer Mesh to get all the latest updates on the project and access to project resources.