This paper explains the importance of using Intel® Performance Libraries to solve a machine-learning problem such as credit risk classification. The objective of solving a credit risk classification problem is to minimize loss from the bank’s perspective; for example, when a person applies for a loan, the bank has to make a decision regarding whom to give approval for the loan and whom not to. The case study uses Intel® Distribution for Python* and Python API for Intel® Data Analytics Acceleration Library (Intel® DAAL)—named PyDAAL—to boost machine-learning and data analytics performance. Using the advantage of optimized scikit-learn* (Scikit-learn with Intel DAAL) that comes with Intel® Distribution for Python, we were able to achieve good results for the prediction problem.

Credit risk is one of the major financial risks that exists in the banking system. How a bank manages its credit risk is very critical for its performance over time; capital depletion through loan losses has been the proximate reason for most organization failures. Distinguishing and rating credit risk is the primary step in managing it effectively. The applicant is a good credit risk if the user is likely to repay the loan. Conversely, if the user is not likely to repay the loan, the applicant is considered as a bad credit risk. The bank has to analyze applicant’s demographic and socio-economic profiles before a decision is made regarding his and her loan application.

With the help of Intel optimized computational packages and an Intel® Xeon® Gold 6128 processor, a faster predictive model is developed on this data. The machine-learning model helps to guide the bank manager to make a decision whether to approve a loan to a prospective applicant based on his and her profiles.

The hardware configuration of Intel® Xeon® Gold 6128 processor is shown in table 1.

The development of this use case had the following dependencies (table 2).

Machine learning and data analysis using Python get their power with Intel® Distribution for Python1. Intel® Distribution for Python is equipped with Intel optimized computational packages2 like NumPy, SciPY, scikit-learn* and PyDAAL (a free package which implements Python bindings to the Intel® Data Analytics Acceleration Library, or Intel® DAAL)3.

scikit-learn is a commonly used library for machine learning mainly because of its algorithm richness. Intel DAAL is more than just a set of machine-learning algorithms, as it implements and optimizes the full data analysis pipeline, from loading data and transforming and filtering it to analysis and modeling of data with classic statistical and machine-learning techniques, as well as advanced deep-learning methods. scikit-learn algorithms shipped within Intel® Distribution for Python take advantage of PyDAAL, bringing scikit-learn performance to new levels.

The major steps involved in solution design are shown in Figure 1. 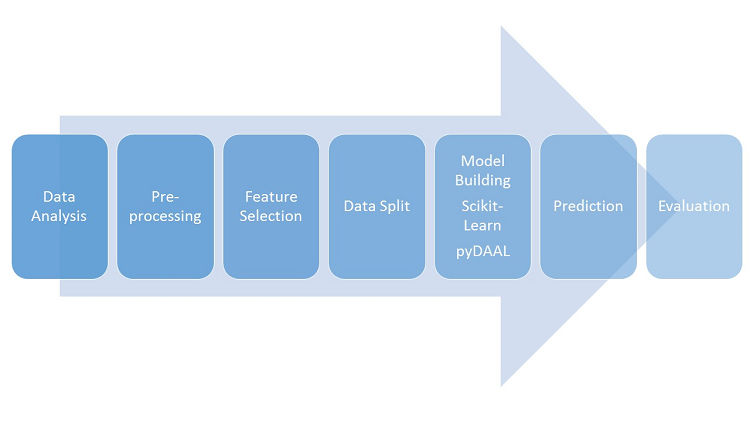 Detailed explanation of each step is given below.

The primarily part in any predictive modelling task is the dataset analysis, which is nothing but an initial exploration of data. The goal of dataset analysis is to have a solid understanding of data, to derive a better solution. Gathering good information about data also helps with feature engineering and feature selection. Data visualization using graphs helps us understand the relation between attributes and patterns in the data.

Table 4 shows the summary of all the numerical variables in the dataset. It includes count, mean, standard deviation (std), min, quartiles, and max in its output.

Here are few inferences that were obtained: 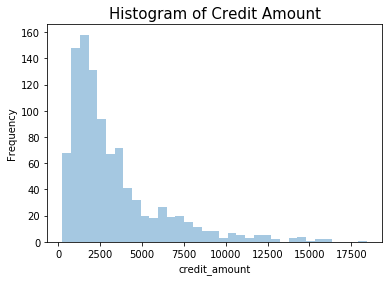 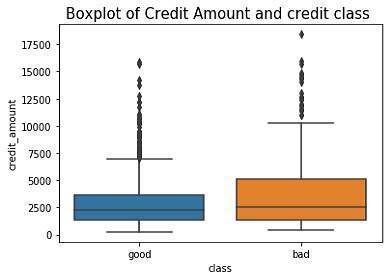 Television and radio or a new car are the top reasons for mosts applicants seeking a credit. loan. Very few applicants are seeking a credit loan for education or retraining. This may mean that either education and retraining are not worth a credit loan or that their costs have been covered entirely either by the schools, universities, government, or in some other way, which seems very unlikely.

Plotting the frequency of the credit loan against the age groups in Figure 5 shows that credit demands from applicants between the ages of 20 and 39 make up for about two-thirds of the total credit demands.

Data pre-processing involves the transformations being applied to the data before feeding it to the algorithm. Since most of the variables in the dataset are categorical, various techniques need to be applied for converting the categorical to numerical variables.

Datasets may contain irrelevant or redundant features that might make the machine-learning model more complicated. In this step, we aim to remove the irrelevant features which may cause an increase in run time, generate complex patterns, etc. The generated subset of features is used for further analysis. The feature selection can be done either by using Random Forest or Xgboost algorithm. In this experiment, the Xgboost algorithm is used to select the best features which has a score above a predefined threshold value . Table 5 shows some of the features sorted based on the score value.

The dataset is highly imbalanced with 70% of the data containing good credit risks. This data imbalance is handled by the SMOTE algorithm, which generates the new smoted dataset that addresses the unbalanced class problem. It artificially generates observations of minority classes using the nearest neighbors of this class of elements to balance the training dataset.

There are various machine-learning models (algorithms) that are created by researchers and data scientists over years. In this stage, machine-learning models are selected for training. All classifiers in scikit-learn use a fit (X, y) method to fit the model for the given train data X and train label y. To compare the performance of various models, an ensemble of classifiers is used. Once the model is trained, it can be used for prediction.

During this stage, the trained model predicts the output for a given input based on its learning. That is, given an unlabeled observation X, predict (X) returns the predicted label y.

All the pre-processing steps upto Step 4 (data split) are the same for PyDAAL implementation. Every algorithm in DAAL accepts inputs in the form of NumericTables, a generic data type for representing data in memory. Since all the converted features are of the same type, we have used HomogenNumericTables for representation. The dataset obtained after feature selection in scikit-learn, is in the form of NumPy ndarray. This can be easily converted to a HomogenNumericTable using the built-in function in the DAAL data management module5.

An algorithm object is created to train the classifier in appropriate processing mode (Batch and Online and Distributed)5.The two pieces of input (i.e., data and labels) are set using the input.set member methods6 of the algorithm object. Further, the compute() method is used to update the partial model.

After creating the model, a prediction object is defined. The testing data set and the trained model are passed to the algorithm using the input.setTable() and input.setModel() methods, respectively. The predictions are computed using the compute() method.

After finding the predictions using the compute() method, the accuracy, precision, recall, and f1-score of the model are calculated.

Table 6 depicts the results of using various classifiers on the balanced and unbalanced datasets. Comparison of results for full and feature selected datasets are also given. All the features are pre-processed using encoding techniques discussed under the data pre-processing section. Receiver Operating Characteristic curve (or ROC curve) is also plotted for each classifier to analyze the classifier performance. The closer the curve follows the left-hand border and then the top border of the ROC space, is considered as the best classifier. Figure 6 shows the ROC curve for classifiers in scikit-learn with Intel® DAAL. ROC curve demonstrates that Random Forest Classifier and Ada Boost classifier are the best classifiers. 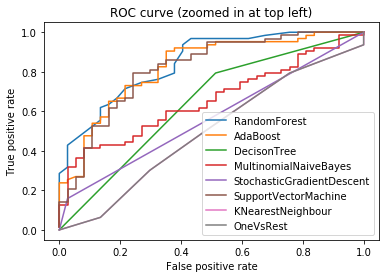 The results of classification using PyDAAL algorithms are given in table 7.