Cash Recognition for Visually Impaired (CRVI) is a mobile app, currently in development, using deep learning technology to make daily monetary transactions easier for visually impaired individuals in Nepal. The challenge: Nepalese currency notes lack any special markings that would allow visually impaired holders to recognize their value. With an image classifier built using deep learning, this app plays a sound signifying the value of the note, allowing the blind to perform daily monetary transactions effectively and independently with confidence.

The introduction to this project and its development were covered in the first two parts of this blog series. Also, Intel® Developer Zone (Intel® DZ) is featuring a success story article with more background information about the project. This third part in the series is the final update, focusing on model construction, deployment methods, useful metrics generated in model training, and links to final source code, tutorial, and datasets.

Some previously collected data turned out to be noisy and shaky, negatively affecting the loss value in the training process. To eliminate the impact and optimize the training process, I needed to revisit the data collected. The affected data was recurated for the final dataset, which included all seven categories of Nepalese cash notes. In each category, there were approximately 2,000 datasets available, of which approximately 1,500 were used for training and approximately 500 were used for validation. In total, around 14,000 datasets of all seven categories of Nepalese cash notes were manually collected.

For the final model, TF.Keras’s ImageDataGenerator class was used for an easy dataset generator pipeline. In the training dataset, augmentation was introduced, whereas the validation set was not augmented but only rescaled. Data augmentation introduced in training sets were rescaled, rotated 45 degrees, width shift range by 15, height shift range by 15, flipped horizontally, and zoomed by 0.5 range.

After preprocessing the dataset and creating the data generator for the training process, final model architecture was constructed. Previously I tried different pre-trained models on the ImageNet* dataset, such as VGG19, ResNet*, and MobileNet* V1. They all gave good results, but for the final model, I settled with MobileNet* V2. In terms of score, it was better than MobileNet V1 and smaller in file size than VGG19 or other larger models such as ResNet, Inception V3.

The final deployment target of my project is on mobile phones, which is why I needed the model to be embedded in my project’s app. For this reason, I needed to train my model on architecture that was suitable for embedding on an app, for offline inference capability. More information on this aspect was covered in my second article update: Cash Recognition for the Visually Impaired: Part 2

Besides a pre-trained MobileNet V2 model on the ImageNet dataset, I added a few dense layers of my own for the final model architecture. 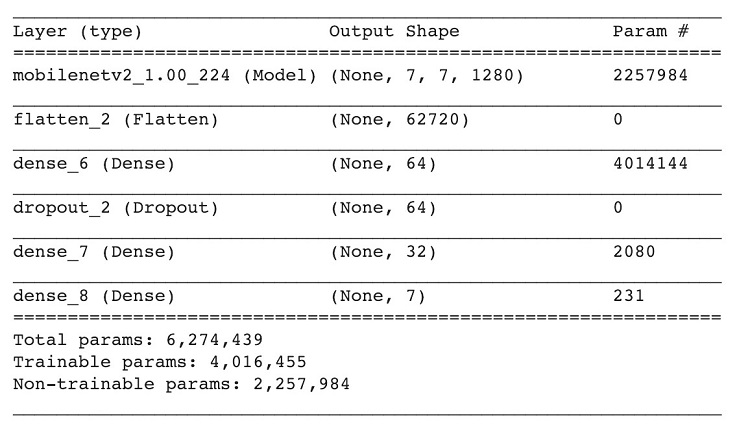 On the above final architecture, the model was trained following the four-step training and evaluation process. At first, I used transfer learning with frozen (trainable property set to false) MobileNet V2 layers and trainable custom layers. My model Adam Optimizer* used a learning rate of 0.0001 and Categorical Cross Entropy as the loss function. During this training process, the training and validation metrics observed were good enough but didn’t perform well on separate validation data. During this initial transfer learning process, the model was first trained for 50 epochs, and the final training loss and accuracy observed were 0.1598, 0.9490 respectively. Similarly, validation loss and accuracy were 0.2441, 0.9330 respectively.

Here is the plot for this initial transfer learning process:

From this step onward, I started fine-tuning the MobileNet V2 pre-trained model layers.

For the second step, I set the last 12 layers of MobileNet V2 model to be trainable and others as non-trainable. The model was again compiled with the same optimizer configuration as the first step and again trained for 50 epochs.

This model was tested on some validation datasets again to compute the confusion matrix and see how it will perform on each category. 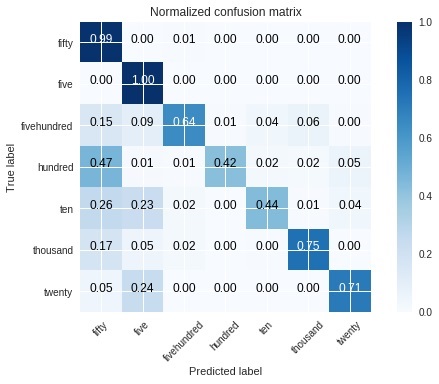 As shown, there are still high error rates for some categories, especially in categories for hundred, ten and five hundred rupees notes.

In the third step, the last 38 layers of MobileNet V2 were set trainable and fine-tuned, keeping the optimizer to be ADAM and the learning rate to be 0.000001 with same categorical cross entropy as loss function. The model was again trained for another 50 epochs.

When this final model was tested to generate the classification report on validation data, the following evaluation was generated:

Similarly, when a confusion matrix was generated, the following result can be observed: 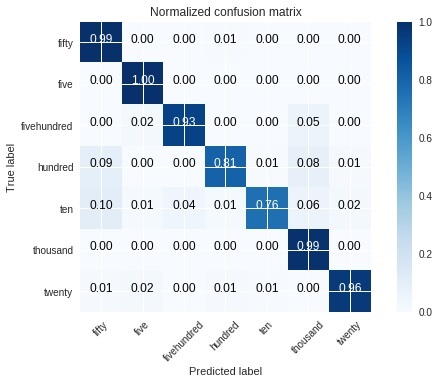 The matrix is shown to be much improved compared to that of previous steps.

As this is a community-based project, I am not only open sourcing the codes but also the original notebook itself; if you are confused by any of the above steps, or I forgot to mention something crucial, refer to the notebook and review how I performed the entire process. All the links are provided at the end of this post.

All the source code for iOS and Android apps are also provided at the end of this post.

I want to thank all those who supported me in this project, especially Intel for providing me with an opportunity to develop this idea into a project. Without Intel’s support, this could not have been possible.

If you want to try the Jupyter* Notebook file provided at the end of this post, feel free to use Intel® AI DevCloud for the training process, which uses Intel® Distribution for Python* and Intel® Optimization for TensorFlow* that allows models to be trained more rapidly.

I will soon be publishing the app on iOS App Store and Google Play* Store. This project will also be developed for a system based on the Intel® NUC, which can be used in shopping malls and stores where users won’t have to use their own mobile phone. I will soon organize an event locally as well that will cover the UI/UX aspect of this app, and live feedback will also be collected from potential users of this app.

As we have seen in the final metrics of the deep learning model used in this project, it’s promising but not 100% perfect. As this is a community-based project, I invite anyone who is interested in this project to contribute via GitHub* or reach out to me directly so that we can make this project more robust and efficient.

If you want to extend this idea further for your own community or country, feel free to do so; I will be more than happy to assist you in that process as well.