This article shares the experience and lessons learned from Intel and JD teams in building a large-scale image feature extraction framework using deep learning on Apache Spark* and BigDL*.

Image feature extraction is widely used in image-similarity search, picture deduplication, and so on. Before adopting BigDL1, the JD team tried very hard to build the feature extraction application on both multi-graphics processing unit (GPU) servers and GPU cluster settings; however, our experience shows that there are many disadvantages in the above GPU solutions, including:

As a result, there are many architectural and technical challenges in building the GPU application pipelines.

JD has a massive number (hundreds of millions) of merchandise pictures, which are stored in mainstream open-source distributed database storage; therefore, efficient data retrieval and processing on this large-scale, distributed infrastructure is a key requirement of the image feature extraction pipeline. GPU-based solutions have some additional challenges to meeting the requirement:

In the production environment, using existing software and hardware infrastructure can substantially improve efficiency (for example, time-to-product) and reduce cost. As the image data are already stored in the big data cluster (distributed database storage) in this case, the challenges mentioned above can be easily addressed if existing big data clusters (such as Hadoop* or Spark clusters) can be reused for deep learning applications.

In this use case, BigDL can provide support for various deep learning models (for example, object detection, classification, and so on); in addition, it also lets us reuse and migrate pre-trained models (in Caffe, Torch*, TensorFlow*, and so on), which were previously tied to specific frameworks and platforms, to the general purpose big data analytics platform through BigDL. As a result, the entire application pipeline can be fully optimized to deliver significantly accelerated performance. 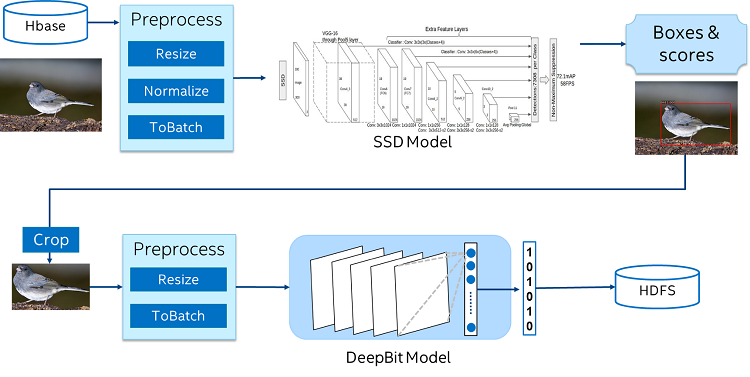 The entire data analytics pipeline, including data loading, partitioning, preprocessing, prediction, and storing the results, can be easily implemented on Spark and BigDL. By using BigDL, users can directly use existing big data (Hadoop/Spark) clusters to run deep learning applications without any changes to the cluster; in addition, the BigDL applications can easily take advantage of the scalability of the Spark platform to scale out to a large number of nodes and tasks, to greatly speed up the data analytics process.

The sample image preprocessing pipeline above converts a raw RDD of byte arrays through a series of transformations. Among them, ByteToMat transforms the byte picture into Mat (the storage format used in OpenCV), Resize adjusts the picture size to 300 x 300, MatToFloats transforms the pixels of Mat into Float array format and subtracts the corresponding channel mean. Finally, RoiImageToBatch batches the data as the input to the model prediction or training.

Users can easily use BigDL to load pretrained models, which can then be directly used in the Spark program. Given a BigDL model file, one can call Module.load to load the model:

In addition, BigDL also allows users to load models from third-party deep learning frameworks such as Caffe, Torch, and TensorFlow.

Performance benchmarking for both the Caffe-based GPU solutions and BigDL-based Intel Xeon processor solutions were conducted in JD’s internal clusters.

Note that the first step (reading the pictures from the distributed database storage) can take a lot of time in the end-to-end performance measurement. In this case, the first step takes about half of the total processing time (including image reading, object detection, and feature extraction) in GPU solutions, which cannot be easily optimized on multi-GPU servers or GPU clusters.

The test results show that BigDL provides much better support for the large-scale image feature extraction application. The high scalability, high performance, and ease of use of BigDL-based solutions make it easy for JD to deal with the massive and ever-growing number of images. As a result, JD is in the process of upgrading the GPU solution to the BigDL on the Intel Xeon processor solution, and deploying it to the production Spark cluster in JD. 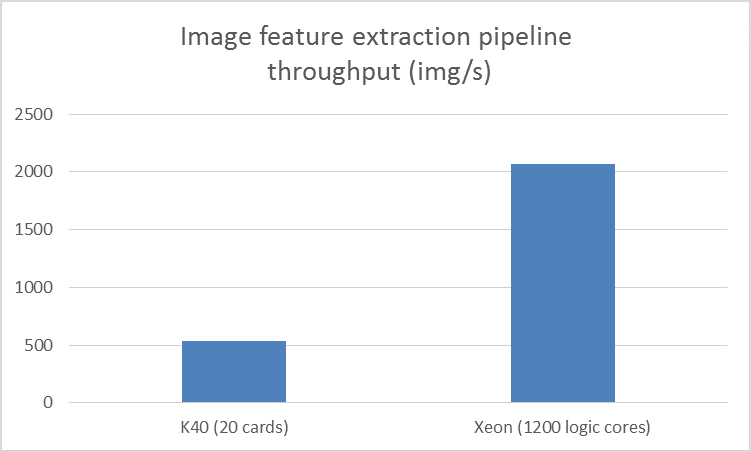 Figure 2: Compares the throughput of K40 and Intel® Xeon® processors in the image feature extraction pipeline.

The high scalability, high performance, and ease of use of BigDL make it easy for JD6 to analyze the massive number of images using deep learning technologies. JD will continue to apply BigDL to a wider range of deep learning applications, including distributed model training.