Ben is an autonomous, self-driving robot built on Intel® architecture. Containing some of the most essential features that a typical self-driving car possesses, Ben can detect, classify vehicles, objects, humans, and can navigate itself accordingly. Developed on an Intel® hardware and software stack, the UP Squared* AI Vision Developer Kit acts as the brain for Ben, doing all the core processing needed for the bot. The Intel® RealSense™ camera works as the eyes for Ben taking in all of its surroundings as a live video feed.

Being completely autonomous in action, Ben operates without needing any human intervention. It showcases the power of the UP Squared AI Vision Developer Kit being used as a single device for running complex deep learning models and giving signals for actuation. The Intel RealSense camera is also handy in terms of productionizing the bot. The night vision and 3D mapping capabilities give Ben even more power in terms of vision and understanding its environment in any circumstances.

Since Ben is currently under development, we are continually working on adding new features to advance the bot even further – see the Future Work section below for more information.

Why do we need Ben?

In 2015, 35,092 people died in car accidents. Someone dies once every 88 million miles driven. That gives you about a 0.011% chance of dying in a car accident in any given year or 0.88% in your lifetime. Most people maintain about 150 relationships, which means that you will probably lose a friend in a car accident. Over 2.6 million people are injured in vehicles every year. This accounts for billions of dollars of car repairs - in deductibles alone. A self-driving car is a great solution to eliminate all these problems. Comparatively, self-driving cars are already precisely that much safer .Let’s now discuss how Ben fits well in this context.

Ben provides developers a simulated approach for building technology that can later be implemented into a real car. The algorithms involved in developing an actual self-driving car are almost the same as those involved in making the bot – deep learning, actuation, rule engines, and visual sensing can be implemented in a much easier and cost-efficient way in a bot like Ben.

The top 3 reasons for building a bot like Ben are: 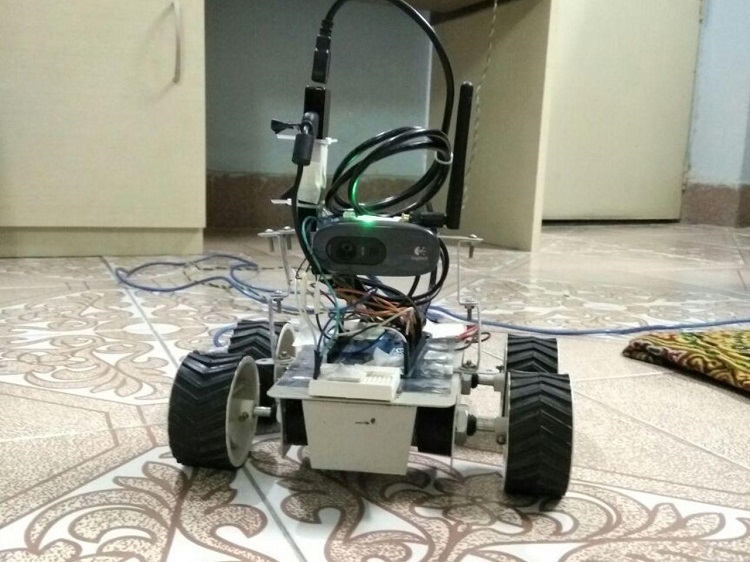 The main flow of the system involves the bot getting motion commands from the UP Squared AI Vision Developer Kit and the kit handling the entire process. The kit receives a live feed from the camera and based on the input processes for detection of any other vehicles. Finally, based on the position of the objects on its trajectory, it decides one of the following actions to execute.

As of now, Ben is reading from a single camera and thus the current model has lots of blind spots. 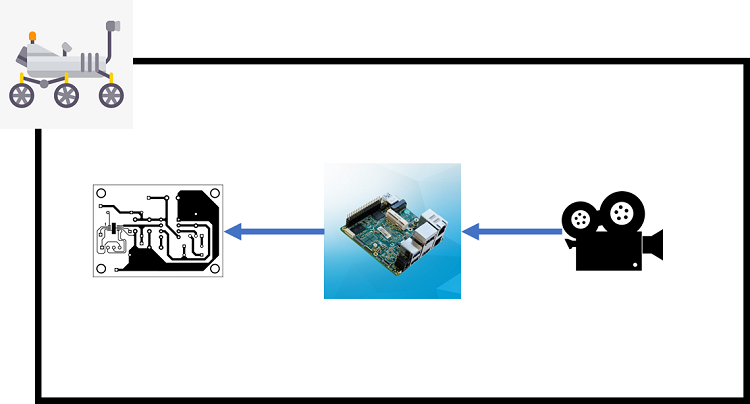 The image above depicts the basic flow as the bot receives the input data from a USB camera and passes it to the UP Squared AI Vision Developer Kit. The kit then processes the data and gives the resultant decision to the motor driver for motion execution.

Let’s dig into the process of performing object recognition and making decisions referring to all the process happening. 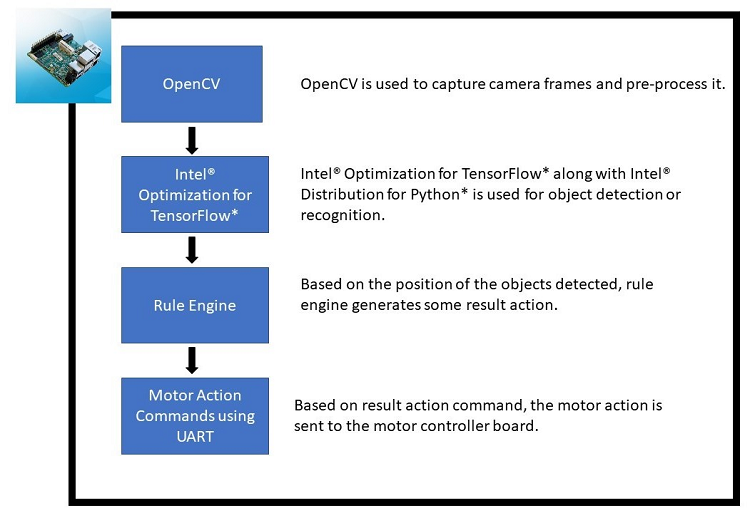 The flow diagram in figure 3 indicates that we initially capture the frames using OpenCV. After some pre-processing, we pass each of the frames to the TensorFlow* object recognition engine. Here we detect the positions of each object.

Finally, based on the action command received by the Arduino UNO* via serial communication, the actuation signals are sent to the dual DC motor driver which are directly connected to the DC motors of the bot. This combination runs the motor and the bot moves in the desired direction.

Let’s discuss each of the above components in detail.

For any application involving the use of video, the video frames need to be captured. This is a very easy and straightforward process using OpenCV. Once the frames are captured, we iterate through each frame and pass it through the recognition engine for detection.

The above piece of code simply captures the video frame. The third line is the one which has to be inside a loop as it captures frames.

The above code is the main block for recognition where we are capturing the camera frames and processing it. Similarly, we are detecting the position of the object detected using the section below and it is the rule engine that is hard-coded with threshold values.

From here, we are using serial port communication to send the action commands to the motor controller for the bot to act.

On the left side of the image below is the agent. We have used toy cars to create a virtual environment of one of the real-world scenarios such as having other vehicles on the road. Behind that is the serial monitor for the Arduino UNO. As shown on the right side, the algorithm works perfectly in detecting the car with the percentage of accuracy being also displayed.

The algorithm not only detects the vehicles surrounding it but also gives a warning. 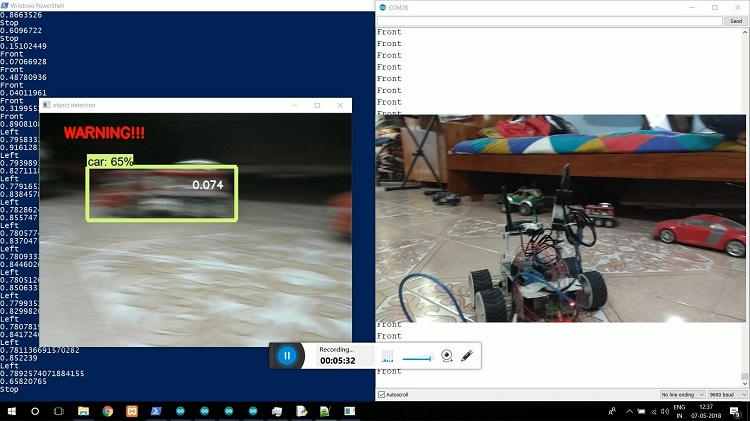 More test cases are shown below from the sample run: 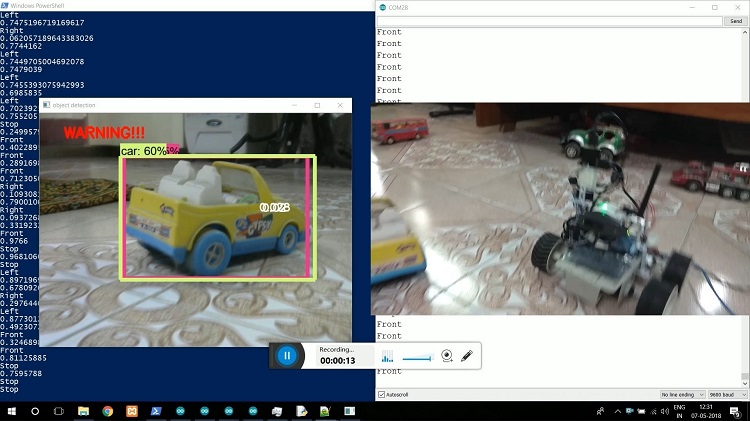 Figure 5. The Bot Detecting a Car and Changes its Path 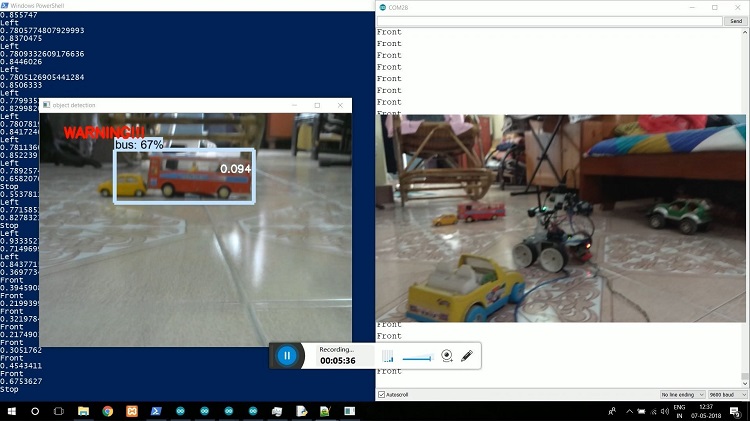 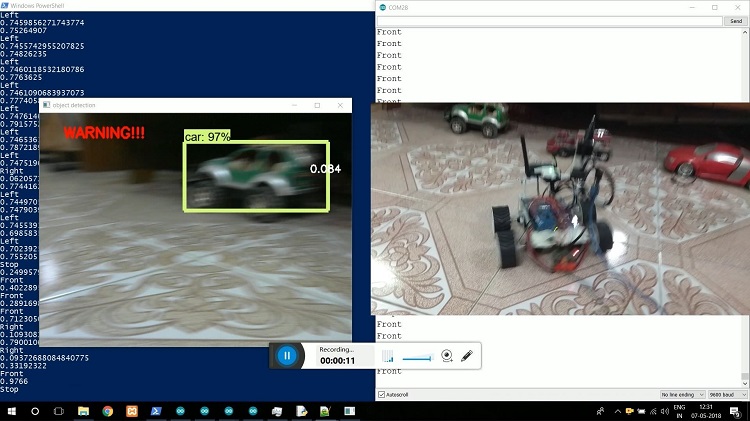 The above image (Figure.7) shows that maximum accuracy (97%) is achieved at times.

The frame per second (FPS) rate is nearly 9-10 and can be improved by adding more computational power to the processing unit and optimizing the algorithms. Initially, the algorithm gave approximately 3-4 FPS, but through optimization, we were able to achieve better results.

Working on this project was a great way to get to know the capabilities of autonomous robotics and deep learning. Hardware and software powered by Intel® architecture provided efficiency and high performing capabilities to the bot. Ben can be a great way of starting research and development in the field of autonomous robotics, deep learning, and how a self-driving car work. Building a bot like Ben is an efficient way of learning in terms of cost, rapid prototyping, and testing, for students and professionals who want to experiment and devote years of research in the field of self-driving cars, autonomous robotics, computer vision, and AI.

Also, real problems may be revealed in the hardware when you take the neural network from the simulator and put it on a “real” car.

Ben is under development, and new features are being added every day. We are continually working in making Ben a complete productionized self-driving bot so the same technology can be implemented a real car. Following are the few areas where we are actively working:

We are continually researching and adding new features to Ben.