A potential issue is the undefined behavior on overflows that may occur when using the VPMADDUBSW instruction u8×s8→s16 (see Figure 1). This is a problem when both u8 and s8 values are near their maximum values1. This can be mitigated by reducing the precision of the inputs by 1 bit. Another technique, used at Facebook, is to break a matrix multiplication into two matrix multiplications: one with small values (to prevent overflow) using 8-bit multiplies and 16-bit accumulates, and another one with sparse large values at full precision.

It includes an FMA instruction for 8-bit multiplies with 32-bits accumulates u8×s8→s32, as shown in Figure 2. Accumulating to s32 eliminates the risk of overflow. The theoretical peak compute gains are 4x int8 OPS over fp32 OPS. Practically, the gains may be lower due to memory bandwidth bottlenecks. 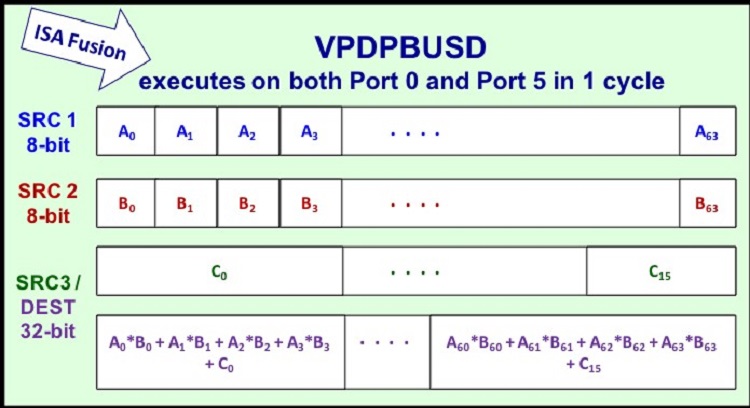 The Intel MKL-DNN library contains popular deep learning functions or primitives used across various models, along with functions necessary to manipulate the layout of tensors or high dimensional arrays optimized for Intel® processors. Intel MKL-DNN implements the 8-bit convolution operations with the activation (or input) values in u8 format, the weights in s8 format, and the biases in s32 format (biases can be kept in fp32 as well, as they take a very small percentage of the overall compute; see Figure 3).

Intel MKL-DNN quantizes the values (assumes non-negative activations; that is, after rectified linear unit (ReLU) activation function execution) for a given tensor or for each channel in a tensor (the choice is up to the framework developer), as follows:

is a tensor corresponding to either the weights w, or the activations, or model inputs a.

is the quantization factor for activations with non-negative values, and

is the quantization factor for the weights. The quantized activation, weights, and bias are:

rounds to the nearest integer. Note that while the s8 format supports -128, the smallest quantized s8 weight value use is -127.

where the approximation is because the equation ignores the rounding operation, and

is the affine transformation with f32 format, and

In quantizing to u8 and s8 formats, a zero value maps to a specific value without any rounding. Given that zero is one of the most common values, it is advantageous to have exact mappings to reduce quantization errors and improve statistical accuracy.

The quantization factors above can be in fp32 format in the Intel Xeon Scalable processors.

In Figure 4, we demonstrate how to efficiently perform the 8-bit multiplies for A×W. Intel MKL-DNN uses an NHWC layout for the activation tensors where N is the batch size, H is the height, W is the width, and C is the number of channels, and an

layout for the weight tensors where O is the number of kernels or output channels, C is the number of input channels, Κ is the height, and Τ is the width. The first 32 bits (4 int8 values) of tensor A shown in gray are broadcast 16 times to fill a 512-bit register. Intel MKL-DNN modifies the data layout of tensor W after quantizing the weights. Tensor W data layout is rearranged as W' by groups of 16 columns, with each column having 32 bits (4 int8 values) to be read continuous in memory starting with the first four values in column one occupying the first 32 bits of the register (red), the next 4x1 occupying the next 32 bits of the register (orange), and so forth (green). The second, third, and fourth block (yellow) below the first block are rearranged in the same pattern. The next set of blocks (blue) follows. In practice, tensor W is usually transposed before rearranging the memory layout in order to access 1x4 continuous memory values rather than 4x1 scatter values when rearranging the data layout. Modifying this data layout is usually done once and stored for reuse for all inference iterations. 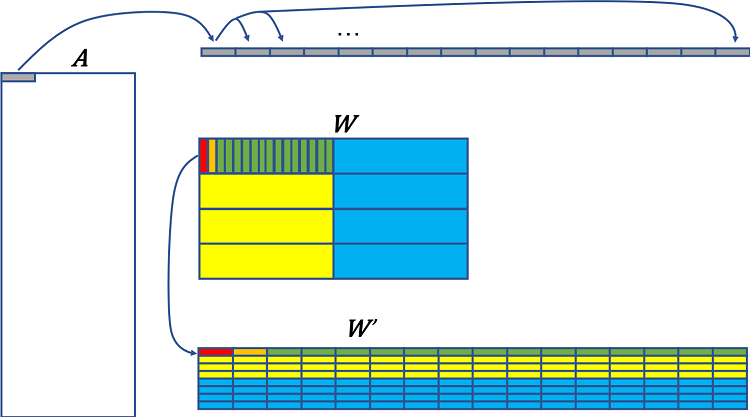 Figure 4. The efficient use of int8 multiplies to compute the product A×W requires a data layout transformation of tensor W in order to read continuous bits. Groups of 32 bits of A are broadcast 16 times to fill a 512-bit register, which are multiplied by groups of 512 bits from tensor W’.

The Intel Xeon Scalable processors have up to 32 registers. When executing in 512-bit register port scheme on processors with two FMA units2, Port 0 FMA has a latency of four cycles and Port 5 FMA has a latency of six cycles. The instructions used for deep learning workloads at int8 support bypass and have a latency of five cycles for both ports 0 and 5 (see Section 15.17 in the Intel® 64 and IA-32 Architectures Optimization Reference Manual). In practice, multiple rows of W' are loaded to multiple registers to hide these latencies.

Quantizing the weights is done before inference starts. Quantizing activations efficiently requires precomputing the quantization factors. The activation quantization factors are precomputed, usually sampling the validation dataset to find the range as described above. Values in the test dataset outside this range are saturated to the range. For negative activation values, the range before saturation could be relaxed to

is the maximum absolute value of these activations. These scalars are then written to a file.

Quantization factors are added to the model.prototxt file.

8-bit Quantization of Activations or Inputs with Negative Values

Quantizing activations or input values with negative values can be implemented at the framework level as follows:

The s8 quantized format is

are shifted by K=128 to be non-negative:

The methodology to quantize the weights and modified bias is the same as before:

When the input signal is already in u8 format (for example, RGB images) but a preprocessing step is required to subtract the mean signal, the above equations can be used where K is the mean

is the input signal (not pre-processed), and

To recap, to use activations with negative values, the activations are quantized to s8 format and then shifted by K=128 to u8 format. The only additional change is to modify the bias:

For a convolution layer, the product

is generalized to equal the sum over all the values of

along all dimensions except the dimension shared with

See Appendix A for details.

is the ReLU function (as in the equations below) and

(as is always the case for the quantization factors), the following property holds:

This property is useful for models with skip connections such as ResNet*, where a skip connection branch may have dependencies on various activations. As an example, and using the nomenclature by the ResNet-50 author in Caffe’s deploy.prototxt (see Figure 5), the quantized input activation in layer res2b_branch2a (abbreviated as 2b2a in the equations below) is:

is the quantization factor. Following this procedure, it is shown in Appendix B that the activation

A batch normalization (BN) inference layer is not needed as it can be absorbed by its preceding layer by scaling the weight values and modifying the bias. This technique only works for inference and is not unique to lower numerical precision. It can be implemented at the framework level instead of Intel MKL-DNN. BN is usually applied after the affine transformation

and before the activation function (details in the original BN paper). BN normalizes x to be zero mean and unit norm, and then scales and shifts the normalized vector by γ and β, respectively, which are parameters also learned during training. During a training iteration, x is normalized using the mini-batch statistics. For inference, the mean E and variance V of x are precomputed using the statistics of the entire training dataset or a variant, such as a running average of these statistics computed during training. During inference, the BN output y is:

That is, during inference the BN layer can be replaced by adjusting weights and bias in the preceding convolutional or fully connected layer.

Model optimizations can further improve inference performance. For example, in ResNet, the stride operation can be moved to an earlier layer without modifying the end result and reducing the number of operations, as shown in Figure 6. This modification applies to both 8 bits and 32 bits. 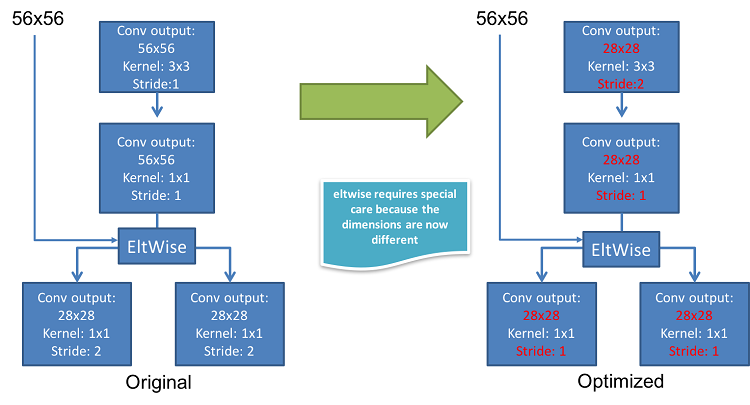 Lower numerical precision inference can improve the computational performance with minimal or no reduction in statistical accuracy. Intel has enabled 8-bit precision for inference acceleration on the current generation of Intel Xeon Scalable processors. Intel is also enabling 16-bit precision for training on future microarchitectures in both hardware and software enabling compilers, the Intel MKL-DNN library, and popular deep learning frameworks. For more information, read Next-generation Intel Xeon Scalable Processors to Deliver Breakthrough Platform Performance with up to 56 Processor Cores.

To convince the reader that these same formulas (see the section 8-bit quantization of activations or inputs with negative values) generalize to convolutional layers, we use the indices of each tensor entry and work through the steps to show the convolutional output.

be the weight tensor with O kernels or output channels, C input channels, Κ height, and Τ width. The modified bias can be represented as:

are the indices for the kernels or output channels, input channels, kernel height, and kernel width, respectively. The convolution output can be represented as follows. Note that we assume batch size one (to omit the batch index for simplicity), the activations have been already zero padded in fp32 format (or equivalently padded with K=128 in u8 format), and the convolution stride is one. 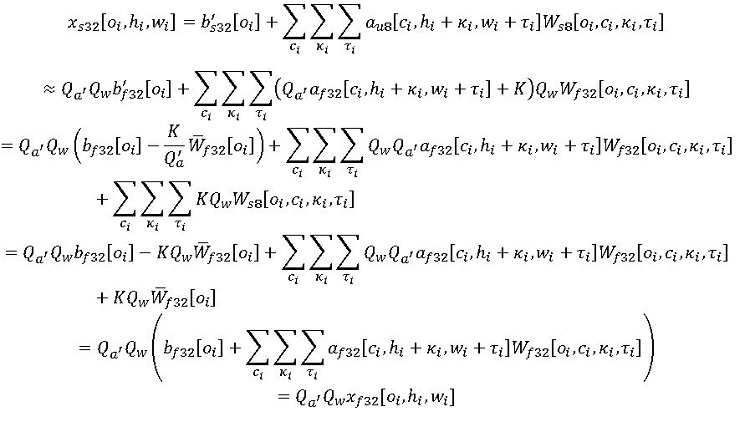 The activation inputs to the layers marked by the blue arrow in Figure 5 are as follows, where layer res2b_branch2a is abbreviated as 2b2a in the equations below, with similar abbreviations for the other layers. 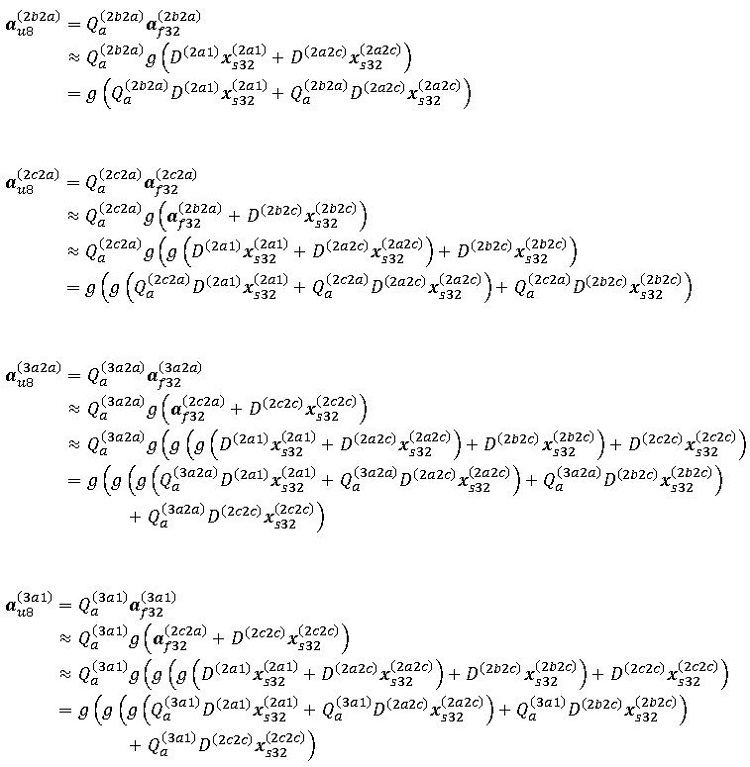 1 In practice, these u8 values are usually closer to their minimum than their maximum if their activations are preceded by the ReLU activation function.