With the massive growth of online information, recommender systems have become indispensable for tackling the over-choice problem. The Wide & Deep Learning Recommender System (Cheng 2016) is an example deep learning (DL) topology that combines the benefits of feature interactions using wide linear models with the generalization of deep neural networks.

Training and Optimization of FP32 Model

We used the Kaggle* Display Advertising Challenge Dataset from Criteo* AI Labs. The training dataset consists of a portion of Criteo's traffic over a period of 7 days that contains information about clicks on ads by users. Each row of data corresponds to a click by a user on a display ad served by Criteo. There are 13 columns of numerical features represented as integers and 26 columns of categorical features represented as hexadecimal values. The label column indicates whether the ad has been clicked. A total of 8,000,000 rows are used for training the model.

A one-hot vector of length 1000 is used for hashing each of the categorical features. The wide part learns sparse interactions between features, effectively using linear transformation, while the deep part generalizes the feature combinations using a feed-forward neural network with embedding layers and multiple hidden layers.

Each of the 26 categorical features is first converted to a one-hot vector of length 1000, of hash bucket size 1000. Embedding is done on these sparse vectors to obtain a dense vector of length 32. The 13 numerical features are directly concatenated together. The hidden layers of multi-layer perceptron (MLP) are chosen to be of size 1024, 512, and 256, respectively.

The OPs within the trained model can vary depending on the framework being used. TensorFlow* Estimator provides one high-level API called DNNLinearCombinedClassifier for generating a Wide & Deep model. In Apache MXNet*, (Chen 2015), we need to manually add the OPs needed to build this model. Here, we describe the process involved in the optimization of pre-trained models using existing tools in the TensorFlow and MXNet frameworks.

The model trained in TensorFlow is optimized as follows: 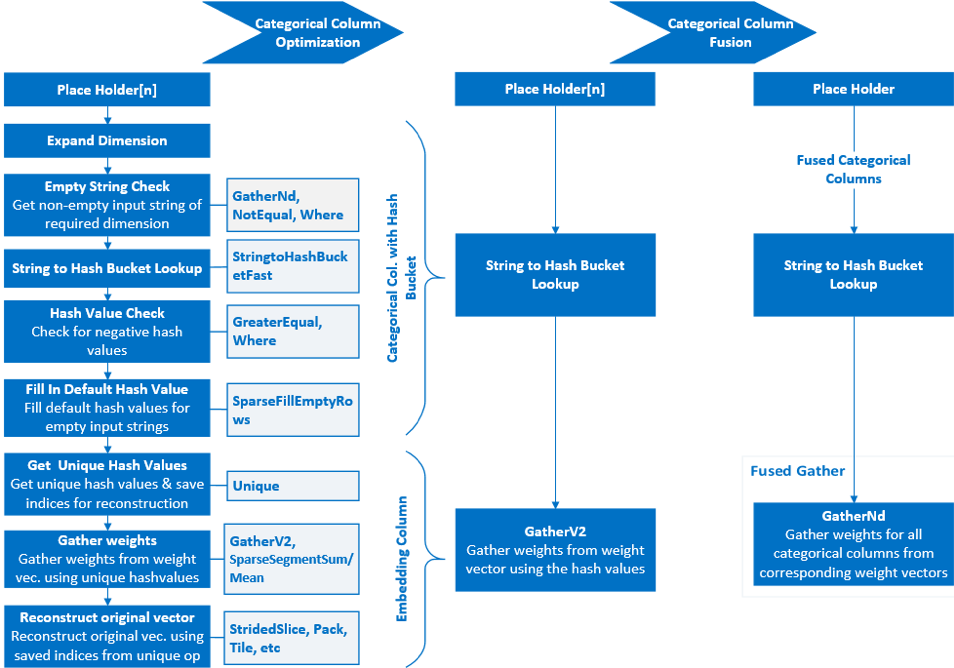 Figure 2. Feature Column Optimization in TensorFlow. OPs that are not necessary for the dataset considered are first removed. Unfused GatherV2 are then combined to form Fused Gather for optimal performance.

The model trained in MXNet is optimized as follows:

The optimized FP32 model can be visualized as shown in Figure 3. 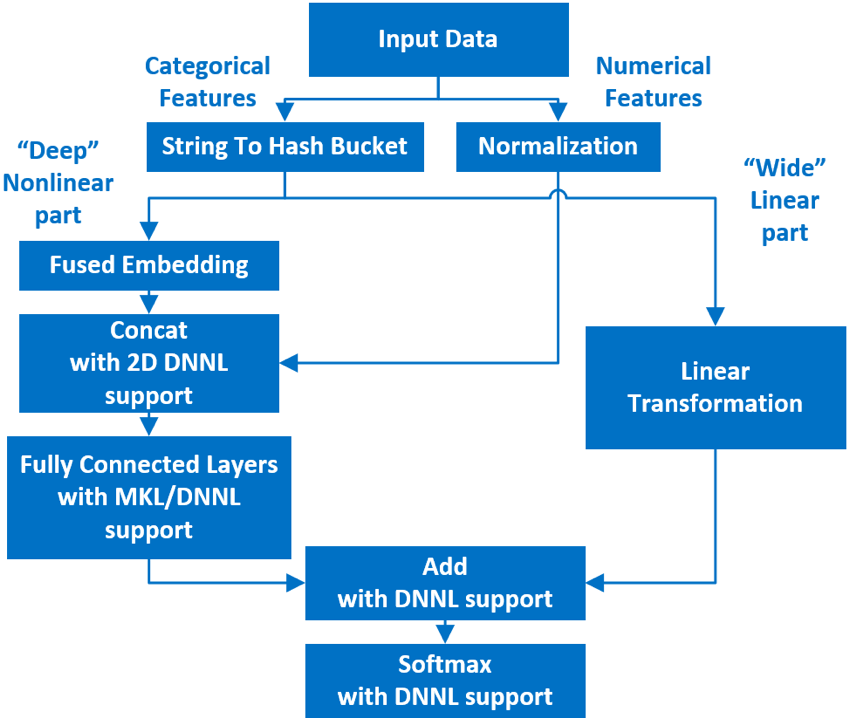 Figure 3. Visualization of Optimized FP32 Model. The numerical features are fed directly into the deep part, while categorical features are first hashed and fed into both wide and deep parts for embedding. The deep part has compute-intensive Fully Connected layers, whereas the wide part has a relatively less compute-intensive linear transformation (dot product in this case). The output from these parts are then operated on by Softmax activation to get the final output.

The quantization process followed in the TensorFlow and MXNet frameworks can be visualized in Figure 4. The FP32 model is first converted to a fused INT8 model. This involves quantizing the weights to INT8 precision, and then replacing FP32 OPs with fused INT8 OPs. For example, MatMul, BiasAdd, and ReLU are fused to form a single quantized OP. Tensor stats data (min, max, range) are collected using a calibration dataset, which is a training dataset subset. In TensorFlow, calibration is done using the quantized model, whereas in MXNet it is done using the FP32 model. The requantize OP is then fused with the quantized fully connected OPs of the corresponding layer. This is explained in more detail in Figure 5.

During quantization of the FC layers, the first FC layer processed with the OPs MatMul, BiasAdd and ReLU is converted to a single fused INT8 OP corresponding to each layer. The last FC layer processed with the OPs MatMul and BiasAdd is converted to another fused INT8 OP. The weights in FP32 precision are quantized (represented by QWeight in the figure), and the FP32 OPs (MatMul, Bias Add, ReLU) are replaced by corresponding quantized OPs that are fused to form a single OP. This process is shown by quantization and fusion OPs in Figure 5. Next, the requantize OP from each FC layer is fused with other fused INT8 OP of the corresponding layer, represented by requantized OP fusion in Figure 5. 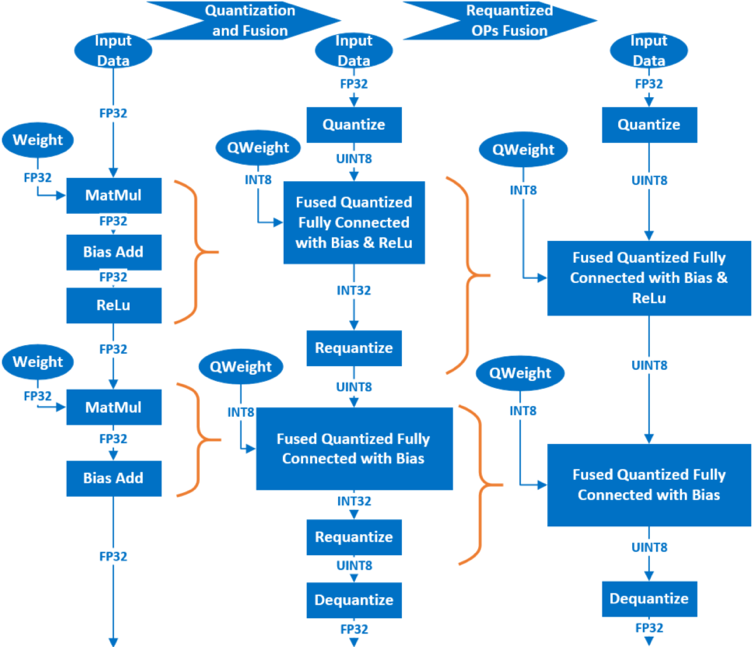 The first fully connected layer can have negative input values, whereas the subsequent fully connected layers only have positive input values because of ReLU activation ahead of each of them. Therefore, to get the best accuracy, we use a different quantization algorithm for the first FC compared to remaining FCs. Since recommendation input data distributions are not natively symmetric data like image or voice, we found that the asymmetric quantization for such input data can achieve lower accuracy loss than symmetric quantization.

Hence, we use 8-bit asymmetric quantization in the first FC as follows:

As part of future work, to efficiently scale the process of quantization, we are developing scalable automatic quantization tools to quantize the model depending on accuracy and performance requirements.

Using Intel DL Boost technology with low-precision INT8 inferencing, we obtain the benefit of improved latency and throughput performance. Figure 6 shows a performance gain of two times more in records processed per second with an accuracy loss of less than 0.5% with INT8 inference as compared to FP32. 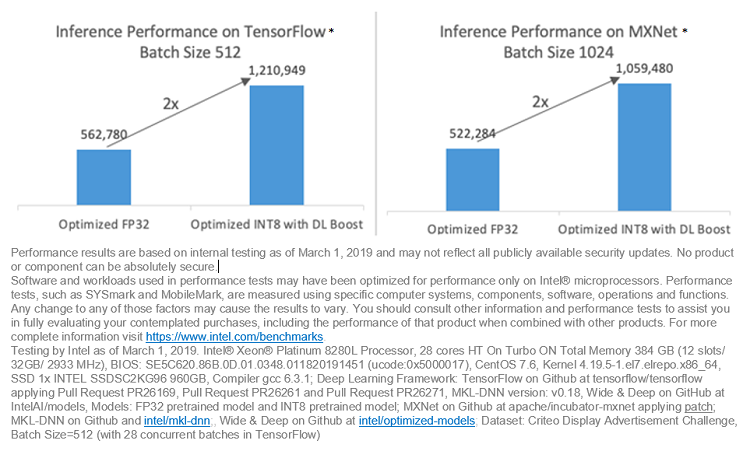 The results were obtained with:

Inference performance is measured in data samples processed per second (higher is better).

1. Performance results are based on internal testing as of March 1, 2019 and may not reflect all publicly available security updates. No product or component can be absolutely secure.

Software and workloads used in performance tests may have been optimized for performance only on Intel® microprocessors. Performance tests, such as SYSmark and MobileMark, are measured using specific computer systems, components, software, operations and functions. Any change to any of those factors may cause the results to vary. You should consult other information and performance tests to assist you in fully evaluating your contemplated purchases, including the performance of that product when combined with other products. For more complete information visit https://www.intel.com/benchmarks.