For a game developer that’s only been around for a decade, 11 bit studios* sure knows how to impress. The Warsaw-based team has created not one but two games that can easily be considered modern classics. It’s a feat they’ve achieved by holding fast to their vision of creating what partnerships manager Pawel Miechowski calls “meaningful entertainment”.

The studio’s first output was the successful Anomaly series of inverted tower defense games that debuted in 2011 and introduced the ‘tower offense’ genre. Next, they turned their attention to creating one of the most powerful and moving depictions of wartime reality ever realized in any media: 2014’s This War of Mine*. The game shattered expectations of what a war game could be and enjoyed widespread critical and commercial success. Not content with shaking up just one genre, in 2018, they delivered Frostpunk*, a steam-powered survival city-builder set on a 19th-century planet Earth that has entirely frozen over. To date, the game has sold over 1.5 million copies and has cemented 11 bit studios’ reputation as a major creative force in game development. 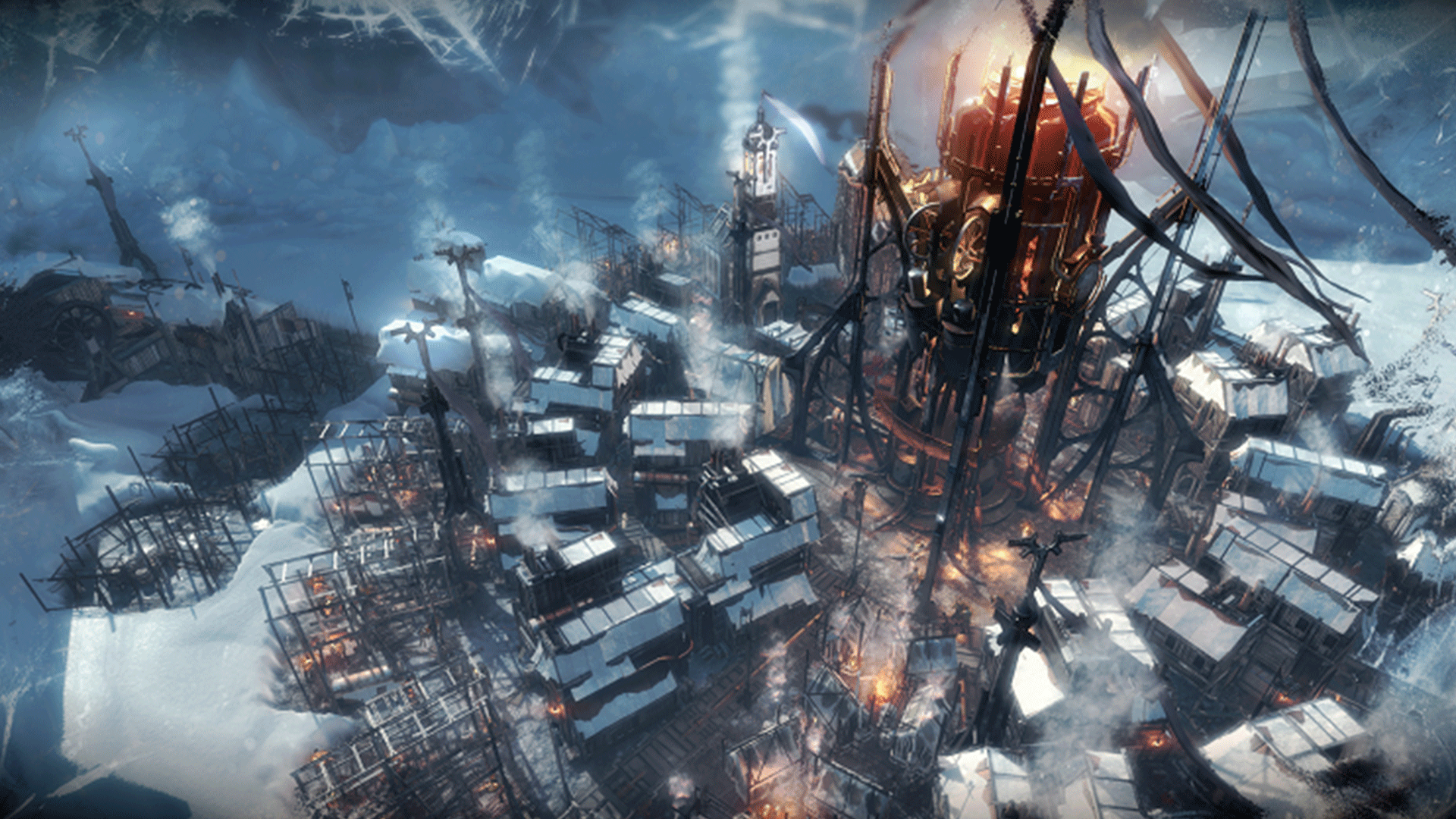 Figure 1. Frostpunk* challenges players to build a thriving settlement in the frozen wastes of its steampunk planet Earth. (Image courtesy of 11 bit studios*)

“Frostpunk is the next big step in our philosophy of meaningful entertainment,” explained Pawel. “This War of Mine was a game about individuals, but in Frostpunk, you play as the leader of possibly the last city on Earth with civilization on the brink of survival.” The common thread is an experience that tests players morally and emotionally, in a society pushed to the limits of its endurance. It’s entertainment that demands personal investment.

The technical collaboration between 11 bit studios and Intel dates back to the development of Anomaly 2, released in 2013. Since then, Intel has continued to provide technical support for the studio’s games, while also bringing its Boost marketing program to bear on This War of Mine and two titles developed externally and published by 11 bit studios: Moonlighter and Children of Morta. For Frostpunk, Intel stepped up to support the team’s post-launch work to optimize the PC experience for Intel® Graphics and deliver marketing opportunities through the Boost program.

It’s never too late to optimize for Intel Graphics. “I’m not going to lie to you―initially, we didn’t have time to optimize everything properly because, after four years of development, we just had to get the game out,” admitted Pawel. Once the game was in the wild, the team’s attention turned to making the relatively resource-hungry game run sweeter, a big part of which was optimizing for Intel Graphics. Szymon Jabłoński, senior lead engine programmer, picked up the story: “We actually wanted to support integrated GPUs, but we didn't have time before the main launch. We had quite low frame rates on PCs with integrated graphics, so we needed to optimize our game.”

Szymon worked closely with his Intel contact, software engineer Bartosz Boczula, to bring the PC version of Frostpunk up to spec. Valuable input came from both sides: testing by Bartosz and the team at Intel provided low-level profiling results, ideas on rendering pipeline optimizations, and helped track down GPU memory bandwidth bottlenecks. This inspired Szymon to think more about profiling and how he could best use the Intel® Graphics Performance Analyzers (Intel® GPA) suite of tools. Szymon’s extensive use of the tools led to numerous optimizations including unearthing bottlenecks in the rendering pipeline. One of the most significant results was that he came up with a whole new algorithm for the snow system, a journey that he and Bartosz documented in detail in a technical article.

“The goal was to make the game run with a great frame rate on less powerful PCs,” summarized Szymon. “That’s what we did.” Szymon and Bartosz were in contact daily throughout the process, sharing feedback from the tools and finding solutions to problems. Fruits of the process included the next iteration of the GPU profiling from Intel, while for Szymon, it led to new ideas for the technology pipelines. “The relationship with Intel is the same as if I was working with someone from our team,” said Szymon.

Frostpunk wasn’t 11 bit Studio’s first dance with the Intel Boost program, but it has been the most comprehensive collaboration to date. “We've been a part of the initiative for a while,” said Pawel. “Intel helped us to push our previous games with promotions on Green Man Gaming* and trailers through their Facebook* channel and so on.” Frostpunk presented an opportunity to step things up with the Boost program, with a raft of activities implemented to help bring the game to new audiences. 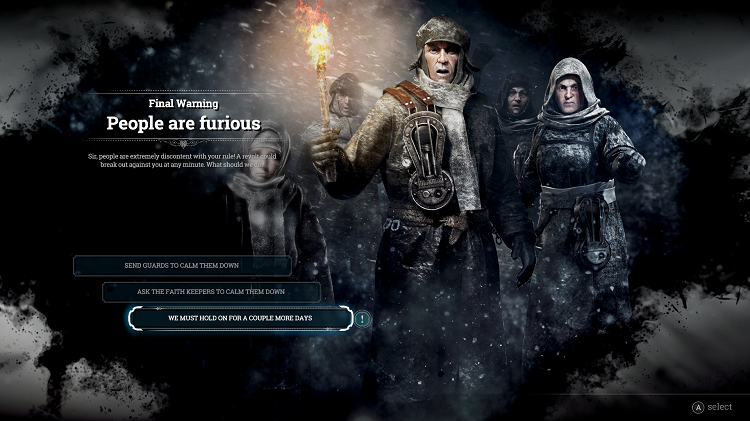 Following on from previous successful initiatives, Intel and Green Man Gaming partnered to promote Frostpunk with front page features on the store. “The Green Man Gaming recommendations to gamers boosted sales,” said Pawel. Other useful actions included inclusion in a newsletter to Intel email subscribers, Intel social media support, and an Intel-sponsored article about the game on VentureBeat*. Additionally, Szymon and Bartosz’s technical article about the snow system optimizations was an initially unexpected bonus, and ultimately helpful in reaching a group that might not otherwise have come into contact with the game. “When it comes to Intel's audience, not all of them are gamers, but they are super interested,” said Pawel.

More than 18 months have passed since the initial launch of Frostpunk on PC, and the title is showing no signs of losing momentum. One factor is the Intel Graphics optimization work by 11 bit studios and Intel, which means that the game is playable with good visual fidelity on Intel Iris® Plus Graphics. For the game’s core PC fanbase, however, the sticking factor is undoubtedly the efforts by 11 bit studios to continually deliver new content and gameplay updates. “Just after the launch in 2018, we prepared a roadmap with five big content updates,” said Pawel. “We currently have a huge DLC called The Last Autumn in the pipeline that we’re still working on.” Meanwhile, October 2019 saw the game released on PlayStation 4* and Xbox One*, bringing the icy steampunk universe to console gamers for the first time. 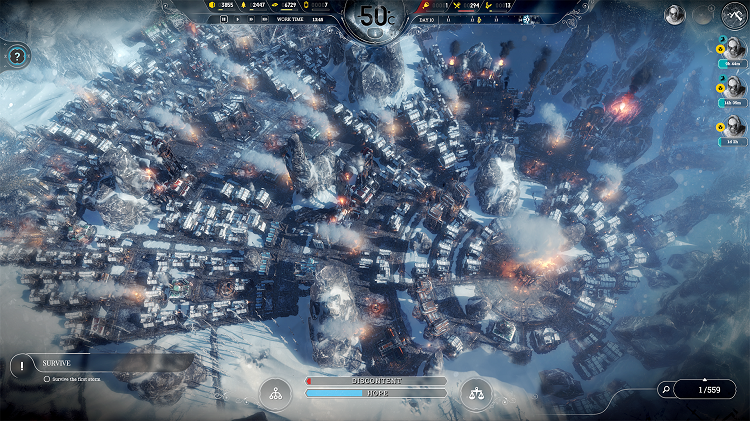 Looking beyond Frostpunk, 11 bit studios have plenty up their sleeves. “We already have another project in the pipeline. However, I can’t unveil any details yet,” teased Szymon. “It's quite a big one and a major investment for us, but you can still call it ‘meaningful entertainment’. We’re staying true to our philosophy of great gameplay with a thought-provoking message.”

Whatever the project is, the chances are good that Intel will once again be in the background, helping to deliver the best PC experience possible. “Boost is a good program with a good partner,” said Szymon. “I would say it’s more than likely that we will cooperate in the future.” And any future cooperation will probably involve exploring new ways to optimize for Intel® hardware. “So far, the Intel relationship was mainly for the GPU-side of development,” added Szymon. “I think in the future we can work on some CPU-side optimization. We want to design with good multithreading optimization for our future games, so I think Intel will be a great help.”

11 bit studios also views its relationship with Intel as having a strategic role in the positioning of the business. “It’s very important to have great partnerships with top technology companies because this is what we want to be,” said Pawel. “We want to make games which are not only groundbreaking when it comes to gameplay or themes―we also want them to be as technologically advanced as possible. For that we need a good partner, and that’s Intel.”

Established in 2010 and based in Warsaw, Poland, 11 bit studios is a successful video game developer and publisher. The company found initial success with the Anomaly series of real-time strategy tower defense games, which have been released for PC, console, and mobile platforms. The success allowed the company to pursue its artistic vision of developing ‘meaningful entertainment’, the first fruits of which were 2014’s This War of Mine, a groundbreaking game that presented the experience of war from the point of view of a civilian fighting to survive. 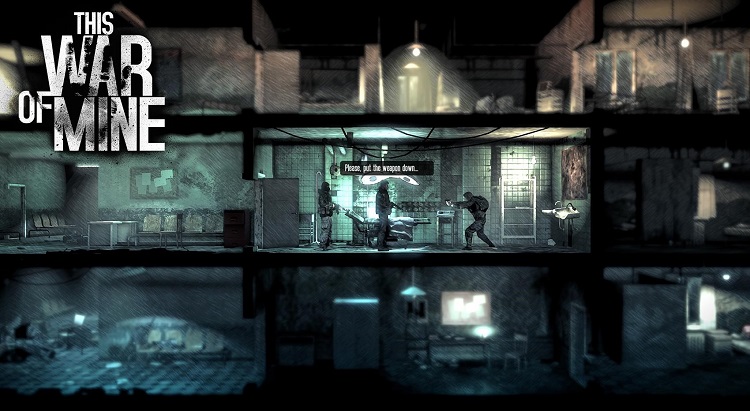 Figure 5. In This War of Mine*, players take the role of a civilian bystander struggling to survive the war that rages around them. (Image courtesy of 11 bit studios)

2014 was also the year that 11 bit studios began publishing games developed by other studios, a journey that began with SPACECOM by developer Flow Combine. In 2018, 11 bit studios published Moonlighter* by developer Digital Sun, followed in 2019 by action RPG Children of Morta from Dead Mage. Both games garnered very positive reviews from press and players.

The genesis for the studio’s most recent self-developed title, Frostpunk, occurred before the release of This War of Mine, but it wasn’t until four years later in 2018 that the game was finally released for PC. It met with a very positive reception from players and critics and has sold over 1.5 million copies to date, cementing the studio’s reputation as an important contemporary independent game developer. Frostpunk was released for PlayStation 4* and Xbox One in October 2019, and further major content updates are planned.

Pawel Miechowski is partnerships manager at 11 bit studios and has been with the company since its inception. Szymon Jabłoński is senior lead engine programmer at 11 bit studios, responsible for maintaining and updating the studio’s proprietary Liquid game engine, among other technical duties.

11 bit studios has at least one unannounced project currently in development.