Corey Warning and Will Lewis are the cofounders of Rose City Games*, an independent game studio in Portland, Oregon.

Rose City Games was recently awarded a development stipend and equipment budget to create a VR Backpack Early Innovation Project. The challenge was to come up with something that could only be possible with an untethered VR setup. In this article, you’ll find documentation about concepting the project, what we learned, and where we hope to take it in the future. Below is the introductory video for the project.

Inspirations Behind Project: One Door

Earlier this year, our team attended the Resident Evil Escape Room in Portland, Oregon. Being huge fans of that franchise, experiencing that world in a totally new medium was really exciting, and it got us thinking about what other experiences could cross over in a similar fashion.

At the time, we were also trying out as many VR experiences as we could get our hands on. When we heard about the opportunity to work on an untethered VR experience, we knew there had to be something interesting we could bring to the table.

We’re currently operating out of a coworking space with some friends working on a variety of VR projects. The WILD crew had some experience in merging real space and VR, so I asked Gabe Paez if he remembered any specific challenges he encountered during that project. “Doors” was his response, and I decided to chase after creating a “VR Escape Room” experience, with the idea of moving through doors as the core concept!

The scope of this project is to create a proof of concept VR application using the MSI* One VR Backpack. We’re attempting to create a unique experience that’s only possible using this hardware, specifically, an untethered setup.

Right away, we knew this project would require an installation, and because of this, we’re not considering this product for mass market. This will likely be interesting content for exhibitions such as GDC Alt.Ctrl, Unite*, VR LA, etc.

Players will be in a completely virtual space, interacting with a physical door installation. They will be wearing the MSI VR One* backpack, with a single HTC VIVE* controller, and an VIVE headset. Each level will contain a simple puzzle or action the player must complete. Once completed, the player will be able to open the door and physically step through to the next level. At that point, they will be presented with a new puzzle or action, and the game will progress in this fashion. 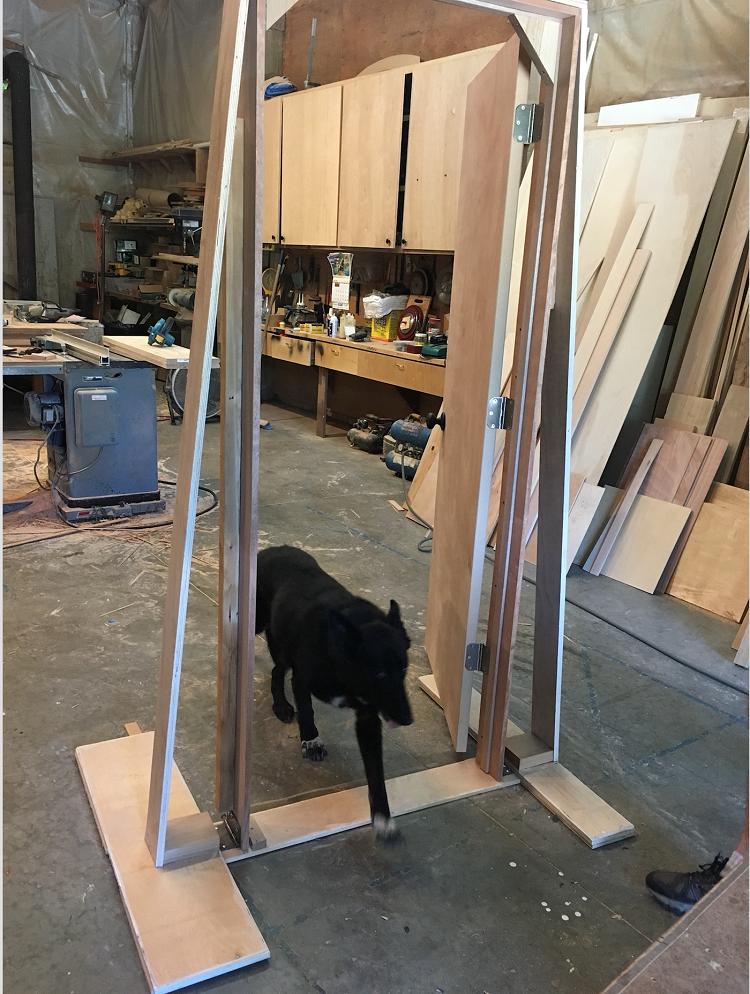 Figure 1. The proof of concept setup for One Door

The player can open the door at any time. However, if a puzzle or action is incomplete, they will see the same level/door on the other side of the installation. We’re considering using an VIVE Tracker for the actual door handle, so that we can easily track and calibrate where the player needs to grab. 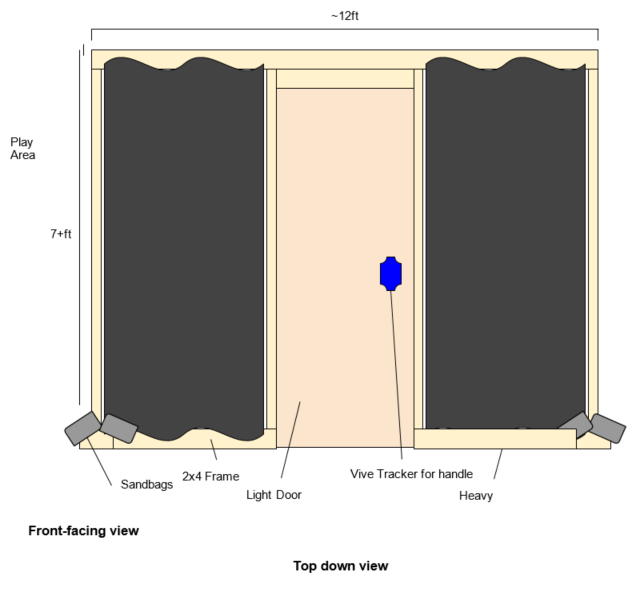 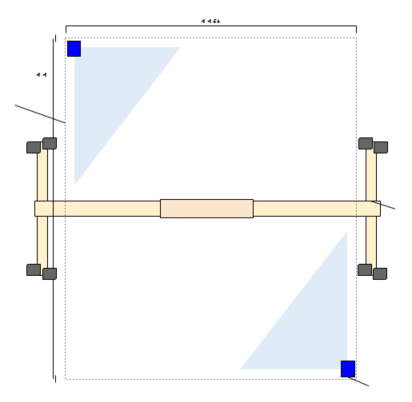 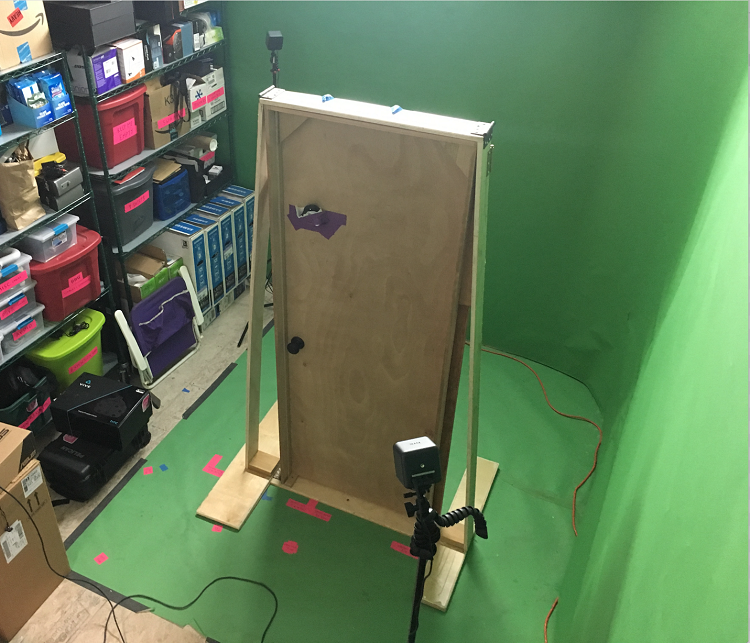 Figure 4. One Door field setup inside the lighthouses 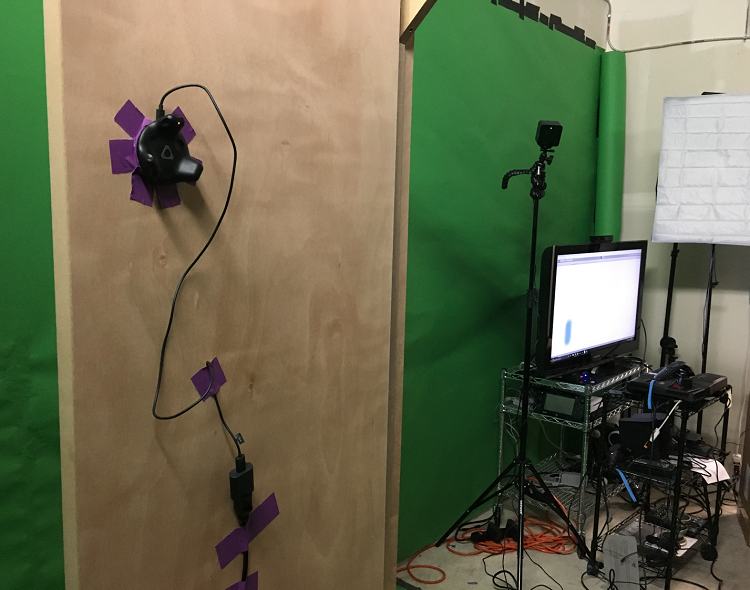 This project was very much VR development training for us in many ways. This was our first time working with a VIVE, and implementing the additional physical build out for a new interactive experience created a bit of a learning curve. I feel like a majority of our hang-ups were typical of any VR developer, but of course we created some unique challenges for ourselves that we're happy to have experience with now. I would definitely recommend that VR developers thoughtfully explore the topics below and learn from our assumptions and processes before kicking off a project of their own.

Our First Time with HTC VIVE*

We've played with the VIVE a ton, but this was our first time developing for it. Setting up the general developer environment and Unity* plugins didn't take much time, but we had to think very strategically about how to develop and test more seamlessly past that point. Very commonly, it saved us an immense amount of time to have two people on site at a time: One person tending to Unity, while the other moved controllers and trackers, readjusted lighthouses, adjusted room scale, and acted as a second pair of eyes. 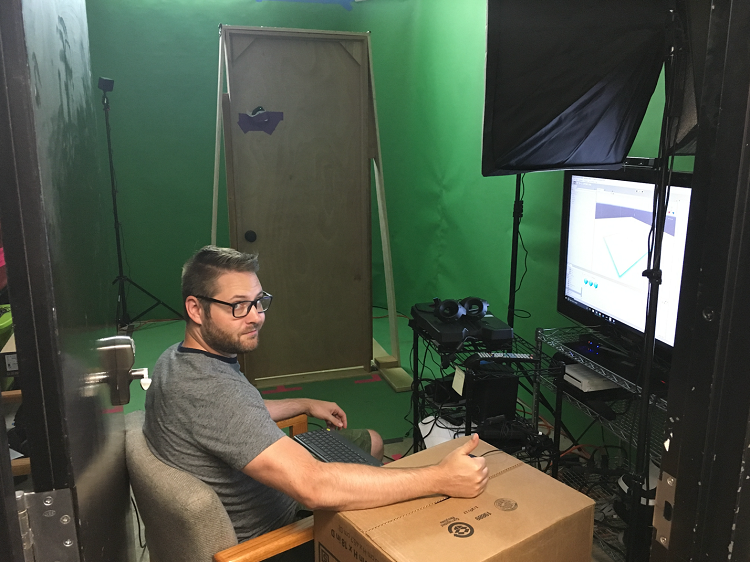 With regard to hardware specifically as well as our project needing to use a physical prop, we went back and forth on many choreographies for how lighthouses were able to track devices, and even had quite a bit of trouble with hooking up a monitor. Since the MSI VR One backpack has one HDMI output and one DisplayPort input, we had to borrow (and later buy) a DisplayPort-to-HDMI converter to both develop the application and use the VIVE headset simultaneously. Luckily, this didn't delay development for too long, and was a better solution than our initial workaround — attaching the HDMI output to an HDMI switcher that we already had, and flipping between our monitor/dev environment and the headset. Continuing with this process for the duration of the project would have been very unrealistic and a huge waste of time.

We were introduced to more new experiences during this project, like being able to remotely work from home and use Unity's Collaborate feature, exploring how awesome it was to experience VR without being tethered, and becoming very familiar with how quickly we’re able to kick off a VR project.

Almost directly paired with testing new equipment and working with a physical build-out, our budget was another challenge we had to overcome. The recommended list of equipment provided by Intel was not totally covered by the allotted funding, so we had to pick and choose a bare minimum for what we might be able to use in our project, then consider how leftovers could satisfy the hours put in by an experienced developer. Luckily, because of our connections in the local game developer community, we were able to work with one of our friends who's been interested in experimenting on a project like this for some time. Still, if we were to do this project from scratch, we would very likely scope it with a higher budget in mind, as at least two more trackers, converter cables, adjustable joints for the tops of lighthouse stands, and a few other small items would have been considered in our minimum requirements to complete this project on a tighter timeline with a more polished product in mind.

From a consumer standpoint, we know that room-scale VR is unrealistic for many, and we still ran into a few issues as we planned for and worked on this project. One of my biggest recommendations to other developers working in room-scale VR would be to buy a tape measure early and make sure you have space solely dedicated to your project for the entirety of its development. We share a coworking space with about 20 other local VR developers, artists, game makers, and web designers, so needing to push our build-out to the side of the room at the end of every dev session added to our overall setup time. It did give us a lot of practice with setup and familiarity with devices, but another interesting revelation was that we never would have been able to do this from any of our homes!

Since our project involved a prop (a full-sized, free-standing door), we had to make obvious considerations around moving it, storing it, and occlusion for the lighthouses. When we think about taking our project beyond a prototype, there are so many more issues that become apparent. Thinking about how this project would likely continue in the future as a tech demo, festival/museum installation, or resume piece, we also had to consider that we would need to show it to more people than ourselves and direct supporters. With this comes an additional consideration: safety. We definitely cut corners to very quickly build a functional prototype, but thinking around polish and transportation readiness, we would definitely recommend spending more time and resources towards creating a safer experience catered to those unfamiliar with VR.

As we prototyped, we were able to remember to pick our feet up in order to not trip, slowly move forward to avoid bashing into an outcropping in the door, and find the door handle without any problem. What we've made serves as an excellent tech demo, but we would definitely take another pass at the door prop before considering it any sort of consumable, public product, or experience. To make transportation easier, we would also build the door differently so that we could disassemble it on the fly.

We're confident in what we have as a technical demo for how easy, interesting, and liberating it can be to use the MSI VR One Backpack, and we're also very proud and excited of what we were able to learn and accomplish. So much so that we'd like to continue implementing simple puzzles, art, voiceover, and accessibility features to make it more presentable. After some additional testing and polish, we'd like to shop the prototype around, searching for a sponsor related to content and IP, VR tech, interactive installations, or trade shows so that we can share the project with a wider audience! Intel is a prime candidate for this collaboration, and we'd love to follow up after giving another round on the demo.

Thanks for letting us be a part of this! 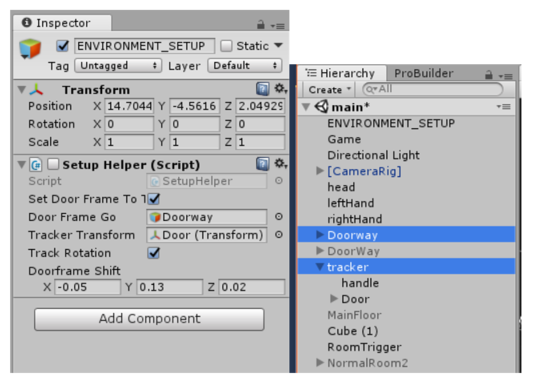 When using a peripheral as large as a door, the room choreography needs to be spot-on with regard to your lighthouse and tracker setup — particularly the tracker, which we affixed to our door to gauge its orientation at any given time (this mainly allowed us to tell whether the door was closed or open). We made a simple setup script to position the door, door frame, and door stand/stabilizers properly.

The Setup Helper is a simple tool that provides a solution for the position and rotation of the door and door frame relative to the VIVE Tracker position. Setup Helper runs in Editor mode, allowing it to be updated without having to be in Play mode, but should be disabled after running the application to allow the door to swing independent of the frame in game. Multiple Setup Helpers can be created to position any other geometry that needs to be spaced relative to the door, like room walls, floors, room decor, etc. in order to avoid potential visual/collision-oriented gaps or clipping.

The Setup Helper hierarchy is shown above. The following applies to the areas highlighted in blue, including the tracker (attached to the door) and doorway.

Corey Warning and Will Lewis are the cofounders of Rose City Games, an independent game studio in Portland, Oregon.