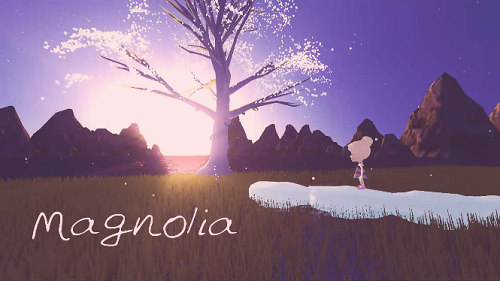 To select this game for the showcase, a panel of DigiPen instructors nominated different projects, and then they voted to determine the top pick. This year’s winner is “Magnolia.”

The team says: “When we started working on our project, we had a completely different concept. We wanted to make a game for the differently-abled. We utilized the Emotiv neuroheadset and implemented its capabilities into our custom game engine. This device enabled us to control the game purely using thoughts. But after playtesting, it proved to be quite unresponsive. It would take a long time to train playtesters to control their thoughts. There was also very little developer support for the product. For these reasons, we decided to drop the idea, even though we had several working prototypes. After one brainstorming session, our Creative Director told the team about a friend whose daughter passed away. He asked the team if we could make a game dedicated to her memory. The entire team was on board with this idea. We got to add creative input from her family and friends as well as dialogue narrated by her father and her sister. 'Magnolia' thus became an experience dedicated not just to her but also to her family and people who knew her.”

“Magnolia” is an interactive story dedicated to the memory of a 3-year-old girl of the same name. The player experiences things the girl loved in her real life as she follows a path to reach a Magnolia tree planted by her father. This experience comes to life with dialogue narrated by Magnolia's father and her sister. The team worked to personalizing the game as much as possible. The environment in the game revolves around places, object, and colors Magnolia loved in real life. The team recreated her bedroom and other art assets with the help of pictures provided by her family. To develop this game, the team had to get to know the character. They had several meetings with Magnolia's father because it was a very delicate subject and the team wanted to be true to Magnolia’s memory. Making this game come to life was an emotional rollercoaster. Every small detail in the game has a story behind it.