The original article is published by Intel Game Dev on VentureBeat*: Chasing the VR American Dream. From Australia. Get more game dev news and related topics from Intel on VentureBeat.

A VR game set with an Americana vibe and the distinctive visuals of the 1950s being made by a small indie team in Melbourne, Australia? Didn’t quite see that one coming. Oh, and your hands are replaced by guns, so you shoot everything to achieve even the simplest tasks. So yes, you must also hang in there for the social commentary from overseas folks passing along their takes on certain aspects of American culture. It may not be for everyone.

"We take you through life as a gun-toting American!" Says Nicholas McDonnell, Managing Director and artist at Samurai Punk, with a chuckle.

American Dream VR boldly makes a statement of political satire in a game that's sure to be met with loud opinions from across the political spectrum. Sure, it's a method of getting noticed, but it rolls out of a type of game that this fledgling team wanted to make. However, it's not just a cynical attention grab.

McDonnell and co-founder Winston Tang had been developing games together since mid-2013, working on game jams outside their day job. In 2014 they took the brave step to start out together with a game that McDonnell describes as a "mash-up of Tetris." It proved, like any first try might, to be good practice. "It was good to get a failure done since we learned a lot of things about how to make games and how to market them (or more accurately how not to market them)," he adds.

Next up was Screencheat, a well-received split-screen action game that displayed plenty of its own innovative gameplay ideas and quirky humor. It allowed the addition of two more staffers, bringing the total to five, and the collective vision of what Samurai Punk wanted to represent took a more solid shape. "We're trying to do the things people wouldn't do," McDonnell says. "We're going into a small market [VR] with a political satire, taking the p**s out of American gun culture. We want to make games that have something to say, be they social commentary or interesting gameplay mechanics or styles."

Like many similar indies, they ply their trade out of a co-working space in Melbourne. (And like many, there can be quite a bit of background noise when conducting interviews, prompting a "Hey, Winston, calm your farm!" retort from McDonnell. [Insert your own Australian accent to further appreciate potential crazy of small studios in Melbourne.]

Sales of these games, along with government funding, investments, or small local grants that McDonnell wrangles in his role as managing director has allowed them to turn their attention to VR as the ideal platform for American Dream.

Above: A slightly different take on the ‘gun show.'

How to make the American Dream

"AD started out honestly as a joke," McDonnell freely states. "We were joking that we play a lot of shooters, and that led to questions like ‘what does the Call Of Duty guy do when he goes home? Does he shoot open the door, grab a beer, and shoot off the cap?" It's all part of the statement that guns are the principal characters in a lot of shooters, and when you stretch that quirky notion in a particular direction you end up with guns for hands and shooting to perform actions as basic as making a cup of coffee and flipping burgers in American Dream VR.

"Track controllers started offering new options for what we needed," says McDonnell of the move towards VR after managing to snag a PlayStation VR kit. "Traditional FPS games are like a point-and-click with a gun. So, for American Dream, VR made more sense for the game design. It's certainly not a financial decision, but it looks like there is steady growth across the board in VR."

Above: This amusement park ‘ride' is sponsored by the gun companies to teach American families about gun uses for everyone from flipping burgers to brewing coffee.

Learning programming in VR was only one of the significant challenges for the small team. "Each platform has its own approach to support," explains McDonnell, "so Vive is more community driven; PlayStation is more traditional with developer forums, private support, and account managers."

There are also differences in the tracking ranges between the systems that caused the team to make some important gameplay decisions for American Dream. "We could start at Vive, then bring down the tracking on Oculus, and then down to PS4…and one developer did this and that just sounded like a f***ing nightmare. We didn't want to create extra work for ourselves since we were already learning this new programming for VR."

This led to a change from moving around the game world to being driven around in a bullet-shaped cart. "It's set in a kind of Epcot Center run by gun companies that are showing Americans how to use guns," says McDonnell. Guiding your path is the game's narrator, Buddy Washington, who talks through the mouth of a Labrador. You can't make this up. 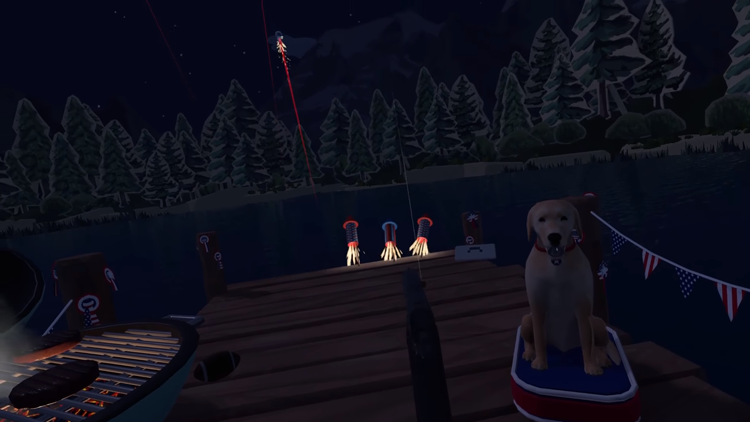 Above: After flipping burgers, fire the gun at the fireworks to celebrate Fourth of July.

"Once we built the ability to sit in a room and shoot, we thought of the things you do every day," says McDonnell. "You eat, drink coffee, go to work, take a s***, have kids. So, then it's about thinking what's funny and physically interactive? You're not shooting at moving targets, it's more like you're completing a set of tasks. Like the burger flipping level, which is getting the burger on the bun, and then get it taken out to the customer…all by shooting at certain pieces of the environment."

Through this mechanic, the game takes you on a journey through the stages of life as perceived in a 1950s-style America. "A lot of the inspiration was from straight video games because we played a lot of shooters," adds McDonnell. "where a game like Half-Life has you shoot a lock to open a door or a vending machine to get a can."

Unsurprisingly, the community reaction has been mixed. "YouTube comments are pretty much split 50-50," says McDonnell, clearly proud of that achievement. "Either it's funny for taking the p**s, or some people are ‘what is this?' or ‘stupid Australians', and some, ‘yeah, f*** America,'" he adds.

A special Fourth of July trailer illustrated fairly clearly how the mechanics will work. Whatever the reaction, it represents a risk and an opportunity for the small group who look to a future that still has a lot of questions with unclear solutions.

"Do we dive into a three-year game; do we just disappear into the ether? Or do we keep whatever momentum might happen from American Dream and move straight onto the next thing?" questions McDonnell.

I think we can probably guess the answer to that one.