The original article is published by Game Dev on VentureBeat*: A Hollywood virtual reality studio that controls its own destiny. Get more game dev news and related topics from Intel on VentureBeat. 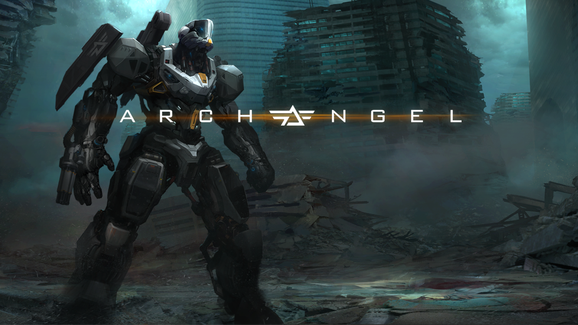 After working in gaming for more than 20 years, Chris Hewish needed a change. The game designer-turned-executive could have pursued a number of different opportunities in the industry. So why virtual reality?

“What drew me to VR were not only the mechanics of it — the gameplay, the mechanics, the interactions. You’re creating all of that from the ground up.

“But also the business side of it. It’s completely new. What is the business model? How do you approach it?” said Hewish. “All of it was fertile ground, new ground to create something new, or be a part of creating something new. That was really compelling.”

At first, that path led him to Survios, where, as the head of studio, he oversaw the development and release of the first-person VR shooter Raw Data. But now, Hewish is the executive vice president of Skydance Interactive*, the video game division of Hollywood media company Skydance Media*, and he’s using his experience to help mold it into a world-class VR studio.

The 90-person company is full of gaming veterans. It used to be called The Workshop Entertainment, a work-for-hire developer that previously helped out on games like Gears of War 4 and XCOM 2. Skydance then acquired The Workshop in 2016 to establish its interactive division. But unlike other subsidiaries in L.A., Hewish and his Skydance Interactive team can run their studio just like any other autonomous developer.

“One of the things that attracted me to Skydance Interactive is that it’s meant to be its own stand-alone business. It’s not siloed away from everyone, but it’s not just an ancillary business to the main business of movies and TV, either,” he said. “If you look at a lot of studios around town, they treat interactive as basically a consumer product. License it out or whatever. We’re free to do that as well, but we have the mandate to pursue what’s best for the business.”

If they choose, they can tap into Skydance’s treasure trove of properties, including movie franchises like Star Trek, Terminator, and Mission Impossible. But for its big debut, Skydance Interactive intentionally avoided making any licensed games. Instead, its first release was PWND, a goofy multiplayer shooter that’s currently part of Steam’s Early Access program.

The studio’s second game, a VR mech shooter called Archangel, came out this past summer for PlayStation*, VR, HTC Vive*, and Oculus Rift*.

“We specifically launched our first two games to be original intellectual properties to show that we really are committed to doing what’s right for the medium. If we had come out with one of the Skydance Internet protocols immediately, it would have set the tone of, ‘Oh, yeah, you’re just an IP studio, the little brother of the main company.’ But by starting with original IP out of the gate we [conveyed], ‘No, we are our own thing,’” said Hewish. 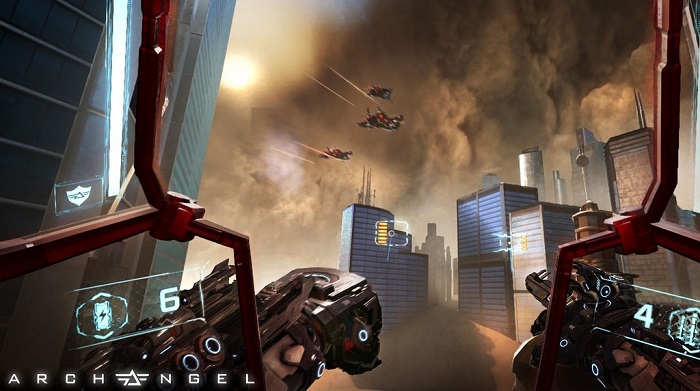 Above: In Archangel, you control a giant mech that’s armed with high-tech weaponry.

While Skydance Interactive will continue to create and publish traditional games like PWND, VR is its main priority. Its internal team is 100 percent focused on making VR games that have fascinating worlds and characters.

“We’ll be doing multiple projects out of that studio. We’re positioning and resourcing it to be a leader in the VR space,” Hewish said. “That’s the crown jewel within our interactive portfolio. We’re also pursuing co-productions or co-developments, as well as licensing opportunities, to hit some VR, some console, PC, and mobile titles.”

“VR was a real opportunity to come into a fresh space and establish ourselves without having to compete with a lot of mature companies that could just immediately outspend everyone,” he later added.

With Archangel, Skydance Interactive wanted to make a fun single-player game that told a cinematic story about a rebel group fighting against a powerful corporation. Going forward, the company plans on expanding those narrative experiences — experimenting with concepts like branched storytelling, where your actions have consequences — so that players really feel like they’re a part of these universes.

That type of storytelling will continue in the studio’s next VR project, a game based on the massively popular comic book series The Walking Dead. Hewish couldn’t reveal too much about it, other than it’s a “multi-year, multi-title” partnership with Walking Dead creator Robert Kirkman and his company, Skybound Entertainment*.

“We closed a great writer’s room about a month ago, where we had a lot of high-level talent in there. It’s not anything in the near-term. We just started development a few months ago,” said Hewish. 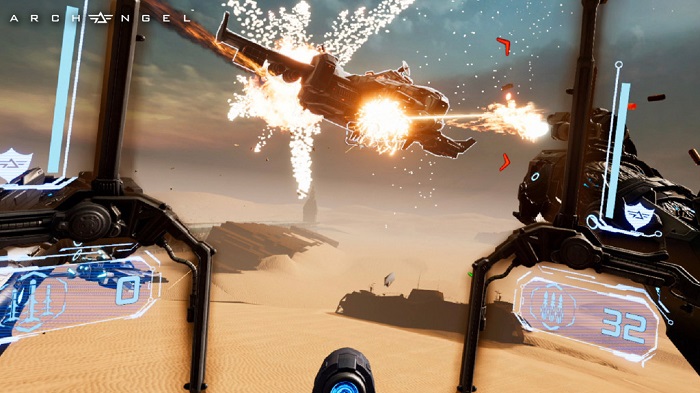 Above: The game takes place in a post-apocalyptic version of America.

It’s no secret that the install base for VR — the people buying the expensive headsets — hasn’t been growing as fast as some investors and developers would like. But Skydance Interactive is in it for the long haul, and it plans on surviving this slow adoption period with a two-pronged approach to its VR games.

These arcades are an excellent way for people to try VR games without spending a lot of money on headsets, motion controllers, and high-end PCs. They’re especially popular in China, where they number in the thousands. Location-based entertainment centers are scattered across other countries as well.

However, developers can’t just port their story-based games to arcades and call it a day. For the location-based version of Archangel (now available at IMAX’s Kips Bay theatre in New York and the Jinyi Theatre in Shanghai), Skydance took the assets from the retail release of the game and made a new experience that’s suitable for shorter play sessions. It consists of three 10- to 20-minute scenarios that make it easy for newcomers to jump into.

The studio is partnering with other LBE companies to make sure that arcade versions of its VR games will be available around the world.

“I think that’s a path forward, especially in the next few years, catering to both markets. Combined, you’ll start to have a real business,” said Hewish.