Accordingly, we have introduced an Aspect-Based Sentiment Analysis (ABSA) algorithm that enables fast and robust deployment across different domains.

Natural language processing (NLP) is a field within artificial intelligence (AI) that seeks to process and analyze textual data in order to enable machines to understand human language. NLP is widely used in applications from search engines to personal assistants such as Siri* and Alexa*. However, the deployment of NLP applications in commercial environments faces major challenges – from scaling across different domains to amassing large amounts of annotated training data – as we discussed in a recent blog. One of the major goals of the Intel AI lab is to address those challenges. That’s why we have introduced an Aspect-Based Sentiment Analysis (ABSA) algorithm that enables fast and robust deployment across different domains. The algorithm was released as part of the NLP Architect open source library version 0.4 in April 2019.

Sentiment Analysis (SA) is the task of detecting subjective information from text. SA is widely used by business organizations to understand customer opinions on products and services, enabling the ability to react accordingly. Most academic and industry research is focused around sentence-level SA, which generates a single sentiment score (positive/negative) per sentence. While this approach achieves high accuracy, it has a major drawback: many sentences include more than one aspect (sentiment target), each with its own sentiment polarity. Consider, for example, the following restaurant review sentence which includes positive polarity towards the ‘food’ aspect and negative polarity towards the ‘service aspect:

“The food was tasty but the service was poor”

In cases like the above example, using a single sentiment score per sentence is too broad to convey all the sentiment information expressed in the sentence.

ABSA is the task of extracting aspect terms and their related sentiment polarity. This fine-grained trait of ABSA makes it an effective application for organizations to monitor the ratio of positive to negative sentiment expressed towards specific aspects of a product or service, and extract valuable targeted insight. 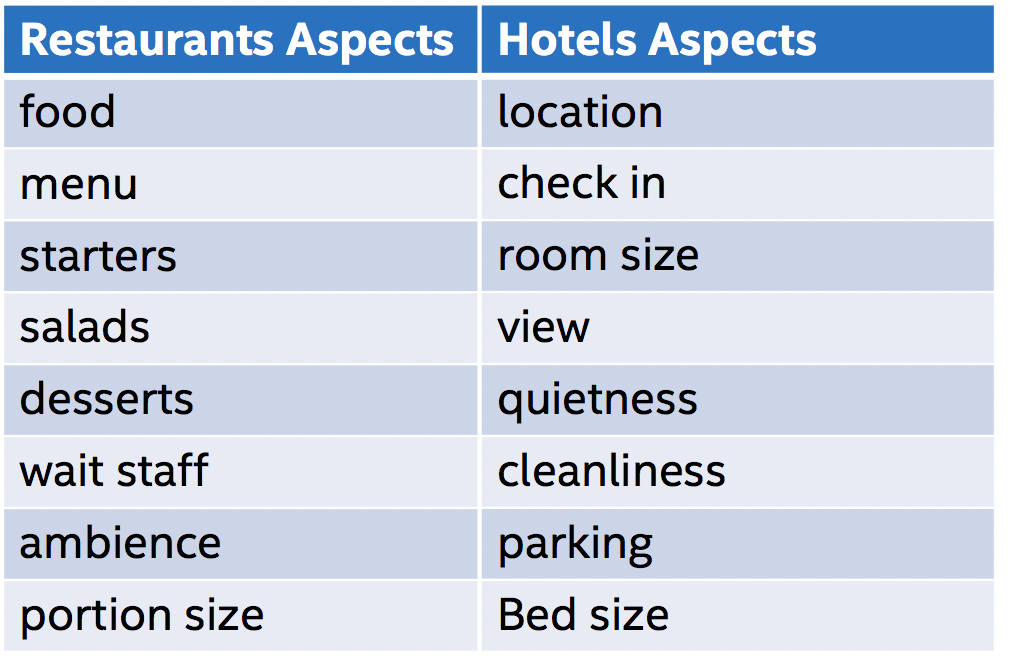 Supervised learning algorithms handle this domain sensitivity challenge well in cases where labeled data from the target domain is provided for training. However, generating labeled data is a labor-intensive and costly effort that requires human expertise. An alternative approach for supervised learning ABSA is lightly-supervised ABSA. This approach requires no labeled training data, making its deployment faster and cheaper and therefore more practical.

The Intel AI Lab has developed a lightly-supervised ABSA solution that was released as part of the NLP Architect open source library version 0.4 in April 2019. This solution enables a wide variety of users to generate a detailed sentiment report.

The solution flow is divided into two phases, training and inference:

We introduced an Aspect-Based Sentiment Analysis algorithm and solution with the following advantages for commercial use:

Check out our code examples on NLP Architect and follow us @IntelAIResearch for more updates from the Intel AI Lab.

[1] The texts used in this example are a sample from tripadvisor.co.uk restaurants reviews provided under the Creative Commons Attribution-Share-Alike 3.0 License (Copyright 2018 Wikimedia Foundation).

Intel technologies’ features and benefits depend on system configuration and may require enabled hardware, software or service activation. Performance varies depending on system configuration. No product or component can be absolutely secure. Check with your system manufacturer or retailer or learn more at intel.com. Intel and the Intel logo are trademarks of Intel Corporation or its subsidiaries in the U.S. and/or other countries.


Keep tabs on all the latest news with our monthly newsletter.